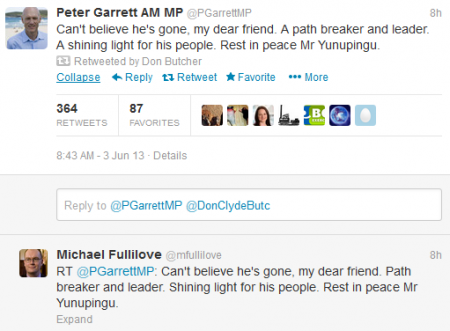 MR YUNUPINGU was a trailblazer who combined his talents as an educator and musician to put Indigenous Australian issues, such as the education of Aboriginal children, on a global stage.

The former front man of the Aboriginal rock group Yothu Yindi was named Australian of the Year in 1992 following a solid record of accomplishment.

Born in Yirrkala in Arnhem Land, he was a member of the Yolngu people. His father's name was Mangurrawut Yunupingu. His skin name was Gudjuk, which means hawk. His name was changed to Mandawuy when a family member with the same name died, in line with Yolngu custom. Yunupingu means "rock that stands against time".

Mr Yunupingu was the first Indigenous person from Arnhem Land to attain a university degree. In 1990, he took over as head of the Yirrkala Community School, making him Australia's first Aboriginal principal.

In 1986, he co-founded a band called Yothu Yindi, which means "child and mother" in Yolngu dialect. Mr Yunupingu was the band's lead singer and most prominent personality and, according to his biographer, Robert Hillman, he had "a great sense of mission about his people".


"Music played an important part in the life of the Yolngu people all together. They are very musical people. It was part of his vision that music could become a political agent in making the broad mainstream Australia more aware of the rich Indigenous culture of his people."

Yothu Yindi released six albums, starting with Homeland Movement in 1988 and finishing with Garma in 2000. They won eight ARIA music awards, including Song of the Year for Treaty, which included snippets of the Yolngu dialect.

Treaty was a worldwide hit, earning Yothu Yindi ‒ and Mandawuy ‒ accolades from around the globe for bringing Indigenous Australian music into the mainstream.

Yothu Yindi followed up the success of Treaty with Tribal Voice, and used his mainstream success to promote Indigenous Australian issues that he was passionate about.

In this song, the hook says:


You'd better stand up for your rights
and listen to your tribal voice.

This was a message that went ‒ in current internet parlance ‒ viral.


"He was juggling a very important place culturally in his community. He was the centrepiece to an internationally acclaimed rock band and also a community education leader."


"He was highly intelligent as well and he always treated everyone the same. He was always open; he would somehow bring light into the room wherever he went. He was just an incredible man."

Mr Yunupingu died aged 56, on June 2, at his home in Yirrkala in the Northern Territory after fighting a long battle with kidney disease.

However, his legacy lives on.

His older brother, Galarrwuy, a senior elder of Arnhem Land, was Australian of the Year in 1978 and remains a force in Australian politics. One of his sisters is the artist Gulumbu Yunupingu. His nephew, Geoffrey Gurrumul Yunupingu, who was born blind, has become an award-winning musician in his own right.

His wife, Gurruwun Yunupingu, and six children survive him.