Why do more men than women support Australia becoming a Republic?

As Australian women, we have come a long way in politics. Gone are the days where our value in society was based only on our ability to bear children, look after the family home and depend on our husbands for financial support. Back in the days where women weren’t expected to assume any political roles, that was the role of the men only! Men alone ran this nation.

In the late 1800’s, groups of courageous women from around the country united and the suffragettes were born. These strong women argued for the rights that we take for granted today. Rights, such as voting, equal justice, equal privileges in marriage and in divorce are just some that these women strived hard to achieve.

Australia can proudly boast that in 1902 we were the first country in the world to give women both the right to vote in federal elections and the right to stand to parliament nationally for election.

Since that time, women have increased their representation in Australia’s parliaments, helping to transform our country to what it is today.

In recent decades, Australia has seen political influence from many strong women. Women like Joan Kirner, Carmen Lawrence, Amanda Vanstone, Natasha Stott Despoja, Julie Bishop, Anna Bligh and Australia’s first female Prime Minister, Julia Gillard. Although women still have a lot more to achieve politically in Australia, I think the suffragettes would be extremely proud to know that their hard work and determination all those years ago has paid off so that a female has made it as the Prime Minister of this country.

I wonder what the suffragettes of yesteryear would think if we could still go that one step further in Australia? That it was feasible that not only could women become PM, but that they could aspire to achieve the top job, and become President of Australia.  A role that, thanks to the suffragettes, would be able to held by either a male or female.

A female President of Australia — I think they’d like the sound of that! 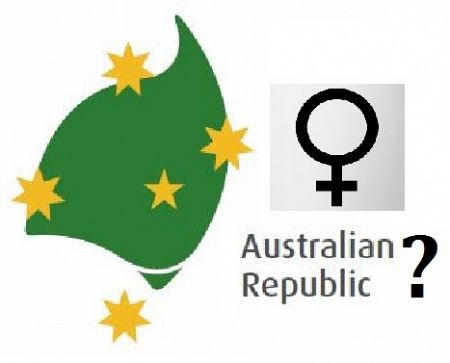 Much like the suffragettes, there have been many different groups in Australia, rallying together to make a better future for the people and the country. One of these groups is known as the Australian Republican Movement. This movement gives a voice to all the people that share the dream of Australia becoming a republican nation. A nation that is fair to all, that doesn’t share a monarch and is its own independent country; one where ALL Australians can aspire to the very top position, irrespective of race, gender or sexuality. An equal Australia for all people!

Even though many Australian women would like to see our country become a republic, recent polls suggest that substantially more men than women want Australia to become a republic at the present time. What are their reasons for this? Do women value the security of the known over the uncertainty of the unknown? Do some women still harbour in their hearts fairy-tale dreams of marrying a handsome prince, dreams rekindled by such things as a royal wedding? Or is there something else going on? This passionate republican has no idea, so I hand it over to you, the readers to comment.