Who gets to play on Team Australia?

What positions and parts do Indigenous Australians ‒ and their unceasingly resilient culture ‒ get to play on Tony Abbott’s Team Australia, asks Aneeta Menon.

TEAM AUSTRALIA is as problematic a concept as ever did exist and the fact that it’s being touted by the leader of a nation is downright disturbing. But let’s go with it for a minute; who is playing on it, and what position?

Recently, a friend and I hit up the National Maritime Museum to visit the East Coast Encounter (subtitle: Re-imagining the 1770 encounter) exhibition, after having stumbled upon its existence quite by accident. Upon entry to the museum, there was no advertisement of the exhibition, to the point where we had to ask if it was still on.

Nestled in an obscure corridor of what appears to be the ultimate tribute to colonial conquest itself, was an exhibit that didn’t feel quite at home amongst the tall ships and a different replica of the good old HMS Endeavour whichever direction you looked. The size and physical context of the ECE exhibition seemed to perfectly encapsulate the token place Aboriginal and Torres Strait Islander culture has been allocated in the greater Australiana landscape. You’re allowed in here, but stay in your corner.

The premise of the exhibition is commendably optimistic, in addressing the initial encounter between Captain James Cook and the Indigenous population:

As we entered and absorbed the mission statement, one of the first things that caught my eye was a brightly coloured mixed media on board piece, Cook & Banks, by Peter Hudson.

It tells the tale of how when the Endeavour first ran adrift in a designated neutral area between two neighbouring tribes. It had long since been agreed that no blood should be shed there.

Thus, it is entirely possible that the randomness of this sacred geographical location where the Endeavour befell its mishap set into motion a chain of events that would forever shape the outcome of the ‘undiscovered’ land upon which Captain Cook and his men now found themselves. Whether or not this was the case, it certainly informed my perception of the rest of the exhibition as the “what if” hurtled through my mind like a gathering tornado.

Slowly at first, but with growing furious momentum as implications of what a potential Aboriginal defensive in the first instance could have meant.

Fast forward to today and how it all did unfold.

Aboriginal and Torres Strait Islander (A&TSI) culture  in Australia is so inextricably entwined with the concepts of the past, of Australia’s history, and its origins. All the frameworks in which common, or even popular, notions of A&TSI exist point to historical elements of the culture.

This leaves very little room for A&TSI’s in the present “Team Australia” and even less so for the future.

Should Team Australia be a real thing, logic would dictate that, based on seniority and on experience, Aboriginal and Torres Strait Islanders would play a critical/strategic role in overseeing the running of the team, perhaps as coach or mentors. Proven by the strength and enduring nature of the culture, and its collective experiences and ongoing successes in the face of constant and often severe adversity, the choice seems obvious.

That is how it should be. But that isn’t how it is.

Overlooked are the easily proven concepts of a highly evolved and resilient people, instead replaced with the uber-replicated image of the primitive and historic Aboriginal, unchanged since the dawn of time. 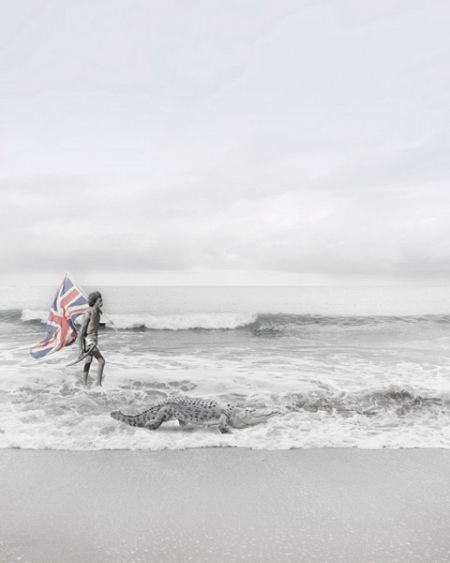 The benefits of keeping A&TSI culture shackled to a specific time and place has countless benefits for a colonised Australia — political, economic, social and cultural. Legitimising, or embracing, the evolution of the culture is at odds with the imagined Australian community that operates today, which is entrenched in the unbearably uncomfortable realities of the systematic destruction of Aboriginal and Torres Strait Islander people, property and culture by a colonial past Australia is still desperately determined to guiltlessly celebrate.

However, there is still a place on Team Australia for Aboriginal and Torres Strait Islanders. Sure, they may be a primitive people from the past — but what a colourful and musical past it was!

Within this awkward metaphor, A&TSI are effectively relegated to cheerleaders for Team Australia — easily marched out, particularly when requiring representation on a global stage, but having no tangible place or influence in the running of the team.

This idea is further explored by Catriona Moore and Stephen Meucke in Racism and representation of Aborigines in Film, where they assert:

‘… multiculturalism can only recognize certain forms of Aboriginal culture as being Valid’ [sic], as having promotional possibilities.’

Notably, the referenced article was penned in 1984; 30 years ago — but still applicable today.

The biggest inhibitors to enabling conversations about an A&TSI future are tirelessly encircled by an inability to properly move on and reconcile with the past. There are generations of wounds that will not, and can not, be fully healed — especially when there is a substantial lack of effort in the area.

The deepest cynic might believe that there is possibly even a politically motivated agenda, which prefers to ensnare the community beating the dead Rainbow Serpent of generations past — focussing on hundreds of years of trauma in preference to aeons of resilience.

This isn’t unchangeable, though, and exhibits like East Coast Encounters provide a good platform for discussion about the ways things were, how they are and how they’re going to be.

It’s also worth mentioning that

‘… a percentage from the sale of the catalogue will be directed to the Indigenous education projects of Ian Thorpe’s Fountain for Youth.’

This is undeniably positive. 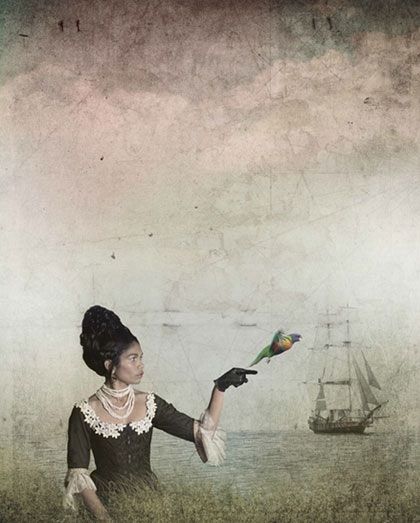 Of the works displayed at the East Coast Encounters exhibition, the ones which resonated most with us were those of Michael Cook — of which a selection of his lengthy portfolio have been used throughout this article.

These pictures reimagine the initial contact between Captain Cook and the first Indigenous Australians to encounter them.

The images contain enough familiar imagery to create a sense of context and ‘safety’ in their knowledge of what is taking place, but blends it with an Aboriginal discourse that replaces the vastly replicated images of Captain Cook, Governor Arthur Phillip and so on, and acts to confront and destabilise the viewer’s notions of the encounter, and exactly who was present at it.

Confronting as they are, the intensity of the images lies in the flawless beauty of the composition and colouring, which balances the aesthetically appealing with the psychological and politically challenging.

And that needs to change in order for “Team Australia” to ever win.

Who gets to play on Team Australia?

2 October 2014, 8:00am What positions and parts do Indigenous Australians ‒ and their unceasingly ...
Join the conversation
comments powered by Disqus
News updates