Under the Lino: A Brisbane collaborative history project is unravelling secrets

Ever wished your family heirlooms came with a set of their own history notes?What if you discovered a whole load of money under the lino? What would you do? Writer Caylie Jeffery has been making history fun with what she found 'Under the Lino', writes history editor, Dr Glenn Davies.

IF YOU THINK ABOUT IT, history is all around us like never before — more people read history, watch history and explore history through the multitude of family history websites.

The Australian community continues to demonstrate a popular interest in the past, not in history only as an academic discipline but history as an entertaining window on the past.

When Eleanor Webster decided to hide her family's passbooks and cash, totalling over £2,000, under the linoleum flooring of her 1912 Queenslander during the Second World War, little did she know that 75 years later, over a thousand people in the new digital age would start an incredible historical hunt to find the heirs of her legacy.

Brisbane author Caylie Jeffrey was renovating her Milton home when she unearthed money and bankbooks hidden under the floor. 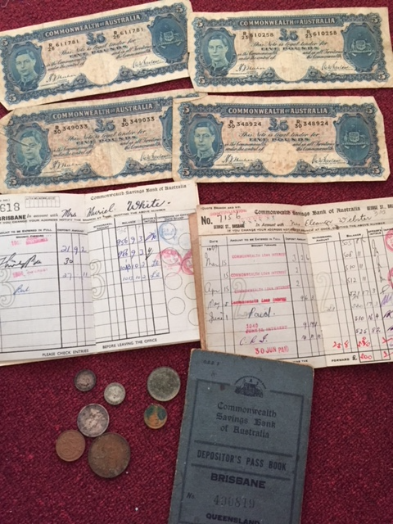 "There was a bit of a lump in the flooring and then we pulled it back and then hey presto that's where all the money was."

On 20 August 2017, Caylie Jeffrey posted a photo of over £2,000 in notes and bankbooks with open accounts on a Facebook page called Old Brisbane Album, where people interested in Brisbane's history enjoy seeing pictures and hearing stories of the city's past.

She had planned to frame her discovery, but instead thought she would ask the group what to do with it all:

“I could never have predicted what was about to happen because of that innocent post.”

The community agreed that the only thing to do was to search for the rightful owners of the money (living heirs).

A huge group of passionate and curious people began the hunt with her.

Day and night for weeks on end, people she'd never met started to ask and answer the questions:

Her Facebook post sparked a manhunt for the heirs and established the "Under the Lino" community project. Since then, Ms Jeffrey has been on an adventure with the greater Brisbane community. As a result, the collaborative community history project has discovered hundreds of photographs, newspaper articles, wills, death notices, marriage records and personal encounters and opened up some incredible hidden stories about Brisbane.

Under the Lino is a fascinating story that has Brisbane talking, questioning and joining hands to search for answers to some pretty incredible mysteries. The book to be produced from the project has a publication date set for June 2018 and will describe how the community history project solved so many mysteries, thereby giving the keys to discovering historical answers to our own family questions. It will document real tales of passion and impotence, intrigue and murder, brothels and fraud, gravestone theft and fascinating facts about Brisbane dating back to the early 1800s that will rock the very foundations we walk upon.

And more than anything else, it will show the value of the incredible community of Brisbane.

This community historical project has involved people helping in the search for answers by visiting cemeteries, taking photographs, meeting with local historians, visiting banks, paying for historical records out of their own pockets and interviewing people of interest. The Under the Lino community historical project, not only gives a window into times gone by, but also the tools to start researching your own mysterious family histories.

Secrets under the floorboards https://t.co/J1PoAdlJEt

History is about change. It is the subject that contributes the most to the broadening out of the imagination. One of the purposes of a study of history is to help transcend our own immediate experience and gain an understanding of how humanity has evolved and developed. It is ironic that when there is constant media comment on the need for workers of the future to be capable of adapting to change, that the academic study of change provided through the school history curriculum is often dismissed.

History teaches critical thinking, something we all need plenty of today. It looks at people over times past and present in different societies, noticing and explaining their attitudes, beliefs and behaviours, as well as interpreting their reactions to the various pressures, conditions and events that induce change.

In 2019, there will be new Queensland senior history syllabuses implemented that are underpinned with the 21st Century skills attributes and skills students need to prepare them for higher education, work and engagement in a complex and rapidly changing world. These skills include critical thinking, creative thinking, communication, collaboration and teamwork, personal and social skills, and information and communications technology skills.

The collaborative community historical investigation shepherded by Brisbane author Caylie Jeffrey has had half of Brisbane researching day and night to unravel this historical mystery and has brought to life an intriguing local story. But even more so, it is a great example of how 21st-century history skills can be used to bring to life a community.