SUBSCRIBE   DONATE LOGIN SHOP
SUBSCRIBE   DONATE
ELECTION LIVESTREAM: Time for toast! Murdoch-free analysis
What to do if you spot conspiracists at the voting booth
Shop IA merchandise!
12 reasons why the Morrison Government should be ‘toast’
Independent Australia needs YOU!
Indigenous Australia

PM Malcolm Turnbull has undermined his newly established inquiry into NT youth detention before it has even begun through an outrageously inappropriate appointment, writes Indigenous affairs editor Natalie Cromb. 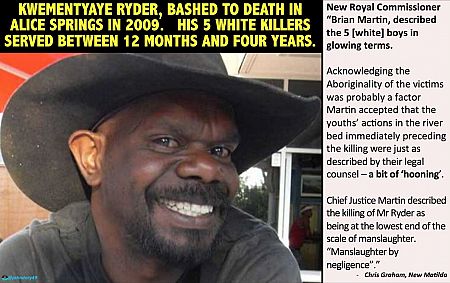 THE Turnbull Government had nowhere to turn after the ABC's Four Corners program aired footage demonstrating the degree of abuse experienced by children in Darwin's Don Dale Youth Detention Centre in August 2014 and, accordingly, indicated he would be going down the path of a royal commission.

The prime minister called his Indigenous Affairs Minister Nigel Sculion on the day it aired to render the gratuitous “please explain”, but the minister indicated the matter hadn't "piqued" his interest enough to watch the documentary at the time it aired on Monday nght. And following a predictably woeful response from the Northern Territory Government, there was little choice for Turnbull — he had to follow through with his promise to pursue a royal commission into the whole deplorable and disgusting affair.

Clearly, this was a begrudging decision if there ever was one, because, let’s face it, the Government is far from concerned with the human rights of Australia’s First Peoples. So, by setting up a "quick and dirty" royal commission, Turnbull found a way to get his clap on the back from White Australia, whilst simultaneously sending an undeniable message to Aboriginal Australia.

The clear message for Indigenous Australian came in the appointment of Brian Martin QC to head up the Commission.

And who is Brian Martin?

Well, according to white rightwing Australia, Martin is a distinguished former chief justice of the Northern Territory Supreme Court (2004 to 2010), as well a former Supreme Court judge in South Australia — one who became more widely known after presiding over the internationally known Falconio trial.

Ask Aboriginal Australia and the story will be very different, however.

This is because in 2010, Brian Martin presided over a trial now infamous in the Wild North, relating to five white youths viciously murdering an Aboriginal man in Alice Springs. Then, in the middle of the night, these young men took a car and decided to go joyriding around the dry Todd River bed. To go driving around at high speed as scores of Indigenous people lay sleeping.

This reckless endangerment of the innocent people was one thing. But when one man, Kwemetyaye Ryder, threw a bottle at their car in feeble retaliation they stopped. They got out and came over to him and then bashed him to the ground. Then, they repeatedly kicked him into unconsciousness. At last, as Kwemetyaye lay defenceless on the ground, one of the thugs delivered the cowardly final killing blow — a broken bottle to the back of the head.

Despite the obscene and horrific nature of this crime, Northern Territory Supreme Court Justice Brian Martin QC described the youths as

These murderous youths had their charges downgraded to manslaughter and then the judge, Turnbull's appointment Brian Martin, considered their crime to be at the "lower end" of the scale of manslaughter, handing down sentences of between one and four years. A man was remorselessly murdered but, because he was Aboriginal, his life was worth just 12 months. And the rest not much more.

All because, in this country, you can be racist and hateful, and murderously violent, but still be considered of “good character” — just as long as your victims are black.

Appointing Brian Martin QC is Malcolm Turnbull’s way of sticking the knife in to Aboriginal Australia. He is perturbed at needing to deal with a national scandal, and inconvenienced by the need for a royal commission, but he wants to make sure that we all know how he feels about an impartial and thorough investigation. The Commission hasn't even started, but the fix is already in.

Like all royal commissions concerning Aboriginal people, this one will run its course, White Australia will have its guilt assuaged and nothing – nothing at all – will change for Indigenous Australians.

That is not justice. It is tyranny.

Strive for justice. Subscribe to IA for just $5 (or less).

How Turnbull got it wrong: The Black Prince, the Elf and Dylan Voller https://t.co/Iu7KyapJFA