David Gibson says that our constitutional monarchy, or rather the fact that we have an English sovereign, is contrary to commonly accepted Australian values. 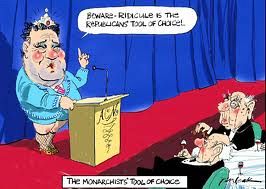 USUALLY I avoid using of the term 'un-Australian'. Most of the time the term is used in jingoistic affirmations of narrow-minded patriotism, usually with xenophobic undercurrents. (the whole 'love it or leave it' mentality which has been growing increasing prevalent with drunken idiots at various events during Australian summers, last music festival I attended wouldn't allow patrons to enter wearing Australian flags as capes). The rate in which the term is used accelerates in the build-up to Australia Day. The employment of the term 'un-Australian' is usually not the most admirable feature of portions of Australian society. I often liken the use of concepts of 'Australian' and everything outside of it being 'un-Australian' similar to the way the Smurfs used the word 'smurfy', overused to the point of meaninglessness.

So it is with trepidation and care that I hope to discuss the un-Australian nature of the peak of our political system - our constitutional monarchy, or specifically having the sovereign of England as our sovereign too. First, I have to quantify what I mean by 'un-Australian' and to do so I need to talk about what I mean by 'Australian'.

A double dissolution is the only answer

2 September 2010, 1:16pm     David Gibson says that our constitutional monarchy, or rather the ...
Join the conversation
comments powered by Disqus
News updates