The Silence of the Cows

...and Horse-trading in Human Meat

Now Australia is engaged in the open bribery of foreign governments and paying a premium for preferential treatment for the elite class of refugee we are trafficking to Malaysia, who are worthier than their brethren and won't be subjected to recreational floggings and suchlike.

It's just like slipping a fiver or $300 million to the prison warden to look away.

How can we morally be a party to such a travesty of justice, that we would demand and pay for some human beings to be better treated than their hapless equals? That simply aids and abets the potential for corruption, surely. And creating a refugee caste system.

The world has become a huge people factory outlet for us in our value-added people farming, where we can wholesale refugees and asylum seekers in 800 bulk lots.

These asylum seekers will be tagged, in much the same way as our poor cows were tagged before being despatched to their cruel deaths in Indonesia. Even before money changes hands, there is no care, no responsibility.

For decades we have betrayed our animals and for years we have been in denial, literally. Blame does not fall upon Indonesia alone. Australia is arguably at greater fault. We feign the moral high ground.

In view of the levy paid by farmers to Meat and Livestock Australia, questions need to be asked about the practices in all slaughterhouses and abattoirs, both overseas and in Australia.

Brad Bellinger, Chairman of the Australian Beef Association has called for a Judicial Inquiry into the Meat and Livestock Association.

How can we, as ordinary citizens, have any faith in our regulatory bodies or our Government overseers? They have betrayed us and our animals.

The Silence of the Cows for all these years will no longer be tolerated by the Australian people, now that we have seen the forensic evidence provided to Four Corners by Lyn White, Communications Director and Cruelty Investigator for Animals Australia.


LYN WHITE — THE COWGIRL AND INDONESIA

This animal advocate and former policewoman has been playing cowgirl and Indonesia for some time. We should remember her role in exposing similar bloody atrocities in Egypt. Have things changed? And what's happening in Saudi and elsewhere? What are we doing to our own pigs? Calves? Maybe we should have a Federal Animal Ombudsperson; a Federal Animal Advocate; a Commissioner for Animals?

We certainly cannot rely on the 'system' as it stands today. It is failing us.

Malaysia has a well-documented dismal record for human rights. Ours isn't crash hot either. Yet we have negotiated an obscene deal that asylum seekers we dispatch to detention centres will receive preferential treatment. As if.

Plus, what do we do when, not if, Malaysia breaks the agreement. Malaysia will be in good company when it does. Australia daily breaks its own guidelines, common decency and semblance of humanity in the detention centres we already oversee and sub-contract out.

Does anyone seriously believe that we can impose our sovereign rights on Malaysia?

And to think we will be on-selling or leasing out children to Malaysia as well. Now we're being told the kidlets will be accompanied by adults. I hope they're not accompanied by anyone from the Meat and Livestock Association because we know only too well how low their benchmark standards are.

We're also going to pay for a prison fit-out for these VIP card refugees where 'our' refugees will have special privileges. Who knows what that means? Room service for eighty lashes instead of 100?

How can we not only promote but endorse, fund and reward such inequity?

Before you know it, other nations with shonky human rights records will be lining up for the $300 million hush money we're paying Malaysia in exchange for promising not to flog, rape, torture and execute people if we put up a few tents and some barbed wire behind the facade.

I want to get a bit personal about this next bit. When possible, I buy free-range eggs. Otherwise we go without. Circumstance dictates I go for the cheapest free-range eggs. But if I knowingly come across a brand/farm that keeps both caged and cage-free hens, I won't buy anything at all from that brand.

I won't buy such manifest expediency; don't want that stuff sitting in my gut or conscience or that yoke of guilt. Not a bar of it. 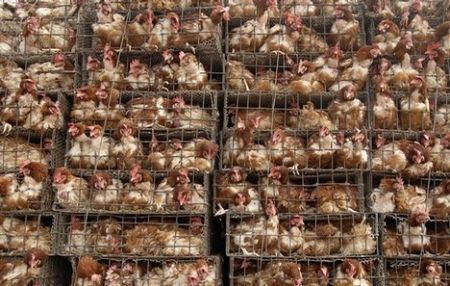 Why should some hens enjoy special privileges and others not? Surely, all hens should be cage free and safe from the malevolent cruelty we daily inflict upon millions of these feathered slaves.

What about the hundreds of thousands of refugees and asylum seekers in Malaysia who live outside Zone Australia? So it's okay to flog them and abuse them and torture them? They are somehow less human than 'our' refugees. No-one will buy them any acts of purchased kindness.

$300 million certainly buys a few pounds of human flesh. If everyone has their price, Australia has named hers. And shamed us in doing so.

This horse-trading in human meat is obscene. We are simply on-selling our international and regional obligations and responsibilities. And our reputation.

Prime Minister Julia Gillard and the red-faced men who installed her are desperate to stave off the inevitable. It won't work. They'll all be turfed anyway, as sure as eggs is eggs.

As I mentioned in an earlier post, Australia is likely to find itself the recipient of refugees and asylum seekers, including nationals, from Malaysia.

Moreover, Australia is on the nose in Malaysia. People are getting fed up with us dumping on Malaysia in more ways than one.

Just last month, about 300 anti-nuclear Malaysians carrying placards like 'Go back to Australia' and 'Malaysia not a radioactive waste dump site' marched to the Australian High Commission in Kuala Lumpur with a clear message to Koala Lumpit.

Because the ungrateful sods don't want our radioactive waste. Cheek of it!

Here's a story about that protest on the Antinuclear website. The site also features a blockbuster article by Independent Australia's managing editor David Donovan and his interview with anti-nuclear campaigner Dr Helen Caldicott, warning that the Fukushima catastrophe may make Japan uninhabitable and questioning the media silence on the subject.

The plant will refine rare earth minerals from iron ore mined in Mount Weld. The Lynas website says Mount Weld has the largest deposit of rare earth in the world.  There goes the neighbourhood. 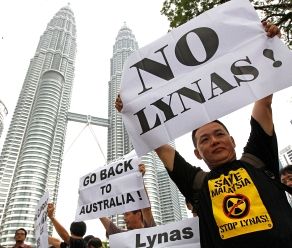 In an interview on ABC Radio's AM program on May 21, Zoe Daniel told us that the iron ore contains the low level (and naturally occurring, my words) radioactive element thorium.

Malaysian activist and spokeswoman Rozaini Mohammed Rosli said "We don't have a guarantee for the safety of the people in the future". Ring a bell?

When Zoe Daniel asked Ms Rosli if it was realistic to think that the Malaysian government would stop the plant from going ahead when it was at such an advanced stage, the activist replied in words familiar to peoples all around the world when talking of their governments:

"...They have so far declined to expose any kind of information to the people. They should have consulted the people before engaging or even thinking of having such a plant in the country."

"Being an Australian company, the people of Malaysia would like the company to keep operating their own operations in Australia and not come here and set up any operation here of such."

Zoe Daniel pointed out that Malaysia was still "cleaning up an old Mitsubishi Chemicals Rare Earth plant at Bukit Merah that contaminated the area and caused birth defects and leukaemia in the population".

Indeed, Mitsubishi are said to be spending about $100 million trying to clean up the mess.

Here's a story about it from The Malaysian Insider that will fill in some of the gaps about the human injury as well.

There are still a few more chapters to be written about the live export of both human and cow meat.

If you ever hear anyone describe human beings as 'behaving like animals', can you tell them to put a sock in it. In a kind and loving way.
NEW AUSTRALIANS INTERNATIONAL AGRICULTURE asylum seekers Australian of the Year David Donovan Helen Caldicott Indonesia Julia Gillard Kuala Lumpur Lyn White Malaysia Malaysian Solution