THE design for an official commemorative coin marking Prince William and Kate Middleton's engagement was unveiled just before Christmas 2010, but many royal fans have reported trouble recognising the couple. Glenn Davies reports.

In 1963, another royal coin controversy happened in Australia when the staunch royalist Prime Minister Menzies recommended calling the new Australian decimal currency ‘royals’. In this instance the Australian people were not troubled, they were outraged.

The Royal Mint's unveiling of the design of its new £5 coin to commemorate the engagement of Prince William and Kate Middleton has led to a torrent of complaints that the couple are barely recognisable on its face. 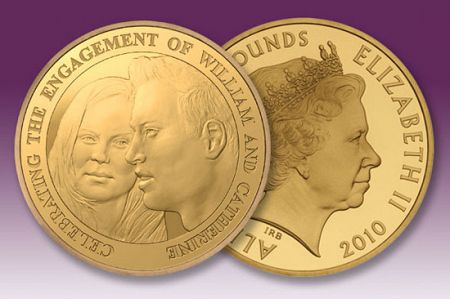 
"The inspiration for the design came from photographs of the couple at a sporting event - the play on the traditional portrait is that Prince William is seen in profile, alluding to his royal status."

Kate Middleton is displayed looking at him face-on in a more informal pose.

The profile image of William engraved on the collector's piece bears a passable resemblance to the second in line to the throne, but Middleton – who is face on beside him – appears to have aged and gained some weight. Critics appalled at the chipmunk cheeks on the likeness of Kate Middleton have taken aim at the coin issued to commemorate Britain's upcoming royal wedding. In fact, several critics have compared William's pic to Al Gore.

The Royal Mint has created many commemorative medals and coins to mark special occasions, including the 2012 London Olympics as well as other royal events, but this is the first time it has created a commemorative royal engagement coin.

Controversies over currency and the Royals have also occurred in Australia. The Australian dollar was first introduced in 1966 when it replaced the Australian pound and introduced a decimal system to the nation. Although investigated as an alternative as early as 1901, the decimal currency system was initially introduced to Australia as an election promise by then Prime Minister Sir Robert Menzies in 1958. There was much discussion about the name of the new currency, with several specifically Australian names such as the ‘Kanga’, ‘Austral’, ‘Merino’, and ‘Dinkum’ bandied around. A public naming competition seeking suggestions with an Australian flavour added nearly 1000 names to this list including such exotic suggestions as 'Oz', 'Boomer', 'Roo', 'Kanga', 'Emu', 'Koala', 'Digger', 'Zac', 'Kwid', and 'Ming' (the nickname of Prime Minister Menzies).

In June 1963, with no clear consensus having emerged on a name, the Government decided to name the new currency the 'Royal'. Treasurer Harold Holt explained that the Government saw this name as “emphasising our link with the Crown” and as being “a dignified word with a pleasing sound".

Between June and September 1963, the Bank's Note Printing Branch developed a variety of design concepts for the Royal notes.

While the name ‘Royal’ was settled upon initially, it proved extremely unpopular with the Australian people. Just three months after announcing the 'Royal' decision the Government conceded on 19 September 1963 that the name of the currency unit would be the 'Dollar'. This decision won quick and general public approval.

The official conversion to decimal currency took place on 14 February 1966. The jingle below became well known to many Australians in the lead-up to the conversion date.

In come the dollars and in come the cents
To replace the pounds and the shillings and the pence
Be prepared for change when the coins begin to mix
On the fourteenth of February 1966.

Chorus:
Clink go the coins, clink, clink, clink
Change over day is closer than you think
Learn the value of the coins and the way that they appear
And things will be much smoother when the decimal point is here.

In come the dollars and in come the cents
To replace the pounds and the shillings and the pence
Be prepared folks when the coins begin to mix
On the fourteenth of February 1966.

Thankfully the 1960s Menzies government finally saw sense in not pushing the ‘Royal’ onto the Australian people. It was a term not recognised as remotely appropriate by Australians. It appears the people of Britain today are bemused with the difficulty in recognising their own royalty on their coins. Maybe they need to modernise and replace the ‘Royal’ for the ‘Dollar’.
REPUBLIC AUSTRALIAN HISTORY Bob Menzies Glenn Davies Harold Holt Kate Middleton Prince William royal engagement royal wedding
Recent articles by Glenn Davies