The Republicans are gathering

July 7, 2011 will see the 20th anniversary of the formation of the Australian Republican Movement. The middle of 1991 saw a great deal of republican activity. There was the ARM formation, the motion at the ALP Hobart Centenary Conference to ‘bring republicanism forward’, and the grassroots activity of Peter Consandine and the Republican Party of Australia, writes history editor Glenn Davies.

In the lead up to the 20th anniversary of the establishment of the Australian Republican Movement, it needs to be acknowledged that although the ARM has certainly been the largest of Australia’s republican groups there have been other groups and activists striving for the same outcome.

The history of Australian republicanism is not the history of a movement.  At his launch of Our Republic, Australian Republican Movement spokesman and novelist Thomas Keneally stated:

“The republic was a river running underground for most of Australia’s history but now it runs by full daylight and the sea is in sight ... [it is] a great torrent bearing us into the future.”

Keneally’s analogy suggested there had been an Australian republican movement totally interconnected into one great momentum through Australian history.  The reality is that it had been a series of billabongs, sprinkled along the republican waterway; a waterway that, at times, had dried up completely.

“a man who centres his ideals in Australia and consciously devotes his life to making Australia prosper.”

Although the party did field candidates in several elections in the early 1960s, it fell victim to an ideological split in 1968. In 1970, Margaret Jones wrote in the Sydney Morning Herald:

“as far as republicanism has raised its head it has been an individual, intellectual sort of phenomenon, rather than a political one.” 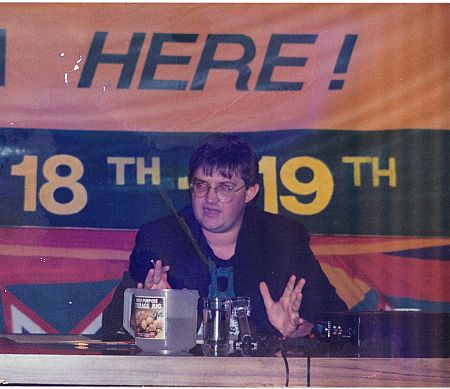 The republicans described themselves as a conservative party, with an average age of 35. It appears the Australian Republican Party and their supporters were individualists without the ability to organise people on a mass scale.  When the Australian Republican Party called to “reverse the trend” in 1982 back to a moral and humane society based on a small business economy, small government, equality, a non-racist and classless system, republican government, and a strong family unit, they were reflecting their membership of the middle class.

“the abolition of monarchy, the present constitution, the federal and state governments, and the existing court system was possible within the next ten years.”

In their place the Republican Party of Australia proposed the country be divided into 50 regions, each with its own 10-person legislative assembly and two delegates in one National Parliament. Their policy was for a 2 tier system of government — effectively a merging of State government with Local government so that National government could work in tandem with Regional government. 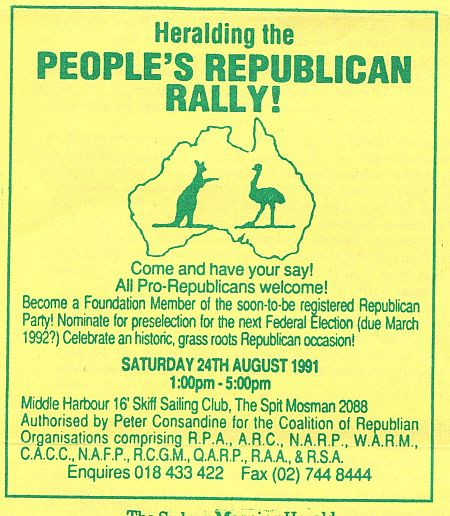 The Coalition of Australian Republicans agreed on the following principles:

1. The Australian people must own the process leading to a republic – including the selection of the republican model to be put to the required referendum.
2. One or more non-binding plebiscites should be part of the process of moving towards the final referendum.
3. We should not wait until the death or abdication of the Queen but should determine our own timetable to discuss our own future
4. Our elected representatives, whether state or federal, should swear allegiance to Australia and her people - not the British crown.

Peter Consandine and the Republican Party of Australia survived into the 1990s although its efforts were increasingly overshadowed by the high-profile Australian Republican Movement. In 2011 the Republican Party of Australia is still led by Peter Consandine and continues to work at a grass-roots level and endeavour to have republican members elected to government. In 1991, Peter Consandine attempted to garner electoral support from the Coalition of Republican Organisations. In 1999, the divisions between the republican organisations over whether a president should be elected or appointed helped to defeat the republican campaign at the referendum in 1999. Now the various strands of republican thinking and their groups are working together in coalition — all pulling in the same direction for the same common cause.