The Republic - Vanstone and Flint state their cases

In the Fairfax press today, Amanda Vanstone said she hopes that the Queen comes back to Australia at least one more time to gloriously proclaim Australia an independent Republic; meanwhile, on his blog, catty monarchist David Flint dons his princely armour. Senior correspondent Barry Everingham reports.

Amanda Vanstone has never been one to pull any punches; she’s an out-there woman who says it as she sees it — and she’s a dinky di Australian shiela.

In the other ring is that prissy purse-lipped Indonesian-born tricky piece of work, David Flint, banging on about how handsome Cory Bernardi is and telling us what a wonderful waistcoat Christopher Pearson wore to the Government reception for the Queen and her husband.

In today’s Melbourne and Sydney broadsheets, Vanstone is in full flight — she doesn’t see the recent royal visit as the Queen’s last she’ll make to Australia.

In fact, she wants the Queen here for “an appropriate and emotional role in the changeover”, so we can turn on a whacking great ceremonial thank you!

“Her visit showed us why change is inevitable. Take the ridiculous fuss over whether the Prime Minister should have curtsied to the Queen. Men aren’t expected to curtsey and in modern Australia I don’t see why our PM should!”

Two thumbs up for Amanda.

To be fair, Flint said the same but in more stilted language — as indeed I reminded TV viewers over the last few days, along with our readers, that the Queen herself decreed years ago that a curtsey was the choice of the woman concerned.

I’d like to remind readers, though, that during the first royal tour in the 1950’s, the mayor of a remote Queensland city was so overwhelmed at meeting his monarch he dropped a full court curtsey — and HM didn’t blink a royal eye.

I agree with Vanstone — curtseying is an unattractive display of deference.

Remember the dreadful sucking up Howard did to George W Bush, which surely made real Australians cringe — it was the male equivalent of the curtsey.

Vanstone is right when she says that under our current system the PM of the day nominates whomsoever he or she would like as Governor General. Cabinet can just read about in the newspaper or hear it on the radio.

And, of course, the Queen has to accept the PM’s advice and thank God Kevin Rudd chose Her Excellency Ms Quentin Bryce—the GG assoluta.

My great fear is that in the event of an Abbott government, Tony will soon have the Howards installed in Yarralumla — and watch the clocks go back if that happens.

Vanstone wonders why the Flintites and Tony Abbott came up with the slogan they thought was a ripper: “you can’t trust politicians”.

She says it seems odd that some people were not happy to have a head of state chosen by a PM with the proviso that a decent percentage of parliamentarians endorsed the choice. Then she goes further, saying she wants the PM – whomsoever he or she is – to seek the approval of decent proportion of parliamentarians to endorse the choice of a GG.

Now, over in the other corner, David Flint has taken as gospel a different piece in the Fairfax press which claimed: the republic is dead long lives the Queen! 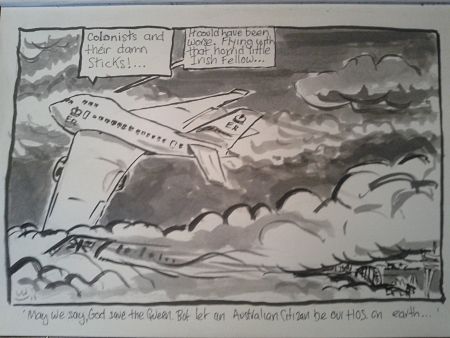 “…so let’s stop wasting more taxpayers money and politicians time on this folly, a folly which has occupied two decades of the nation’s time.”

Where is this bloke coming from and, really, what IS the point of David Flint?

He is currently dividing Australians for Constitutional Monarchy; there is a groundswell against him after he knifed Tom Flynn in the back and installed the hapless young Jai Martinkovics in this place. Jai needs to watch his back now.


Flint is in fighting mood – his armour is on.

He’s not unlike Sir Rodney in the Wizard of ID.

“And have no doubt, if the republic is put back on the agenda ACM will mount a massive campaign to remind people of the scandalous waste of time and money to pay for this folly.”

Flint hates the thought of consensus. It’s his way or the highway.

The ARM could well do to take Vanstone on in an executive capacity. Flint needs neutralising — and a strong woman against him would destroy him.