Rather than keeping politicians in check, the current system gives more power to them. Publius looks at the politician's monarchy.

HOW MANY of you have heard these assertions: “If we directly-elected our Head of State or leave it to Parliament to do so, Australia would become a ‘politician’s republic’. Or how about this gem: “Direct-election would lead to instability and possibly even a pop-star or Shane Warne being made Head of State”.

Question: how well do these assertions stack up to reality? Answer: not very well at all.

Let’s start with the first claim. If we accept the monarchist claim that the Governor-General is our Head of State (I don’t), we find that we are indeed a “politician's monarchy” — for the office of Governor General is virtually always occupied by a politician. In countries with directly elected Heads of State, the position is far less likely to be occupied by politicians, oand if they are politicians they tend to also be academics, scientists and Nobel-Prize Winning diplomats.

By contrast, the following Governors General have had clear political links or have been political hacks: Sir John Kerr (trade unionist and former member of the ALP, nominated by Whitlam, as he thought he was his man); Ninian Stephen (close friend of Malcolm Fraser); Sir William Deane (DLP members, close labour links); Peter Hollingsworth (close friend of John Howard and religious leader); Michael Jeffrey (former W.A. Governor, arch-conservative); Quentin Bryce (several Labor connections). Only Zelman Cowen’s political views remain unknown. Put bluntly, 65% of our Governor-Generals’ have been former politicians themselves, while 96% have been politicians friends or political hacks.  ACM can’t seriously be suggesting we’d become over-run by politicians any more than we already have been.

Indeed, our constitutional system is, by definition, a  “politicians’ monarchy” as the Governor-General in almost 100 per cent of matters acts on the advice of the Government, or rather the Prime Minister of the day. Only about once in a century is a reserve power exercised. (Hint: think of the 1975 Constitutional Crisis.)

On the second point, some people clearly have not done their research when it comes to direct election. Yes, people with some political links do get elected (key word: elected — at least there is legitimacy on who is at the apex of your system of government), but they tend to also be Professors, scientists or judges. In Iceland, for example, the following people have been elected as President: Dr. Kristján Eldjárn (novelist, poet, writer, curator, teacher);Vigdís Finnbogadóttir (academic, UNSECO Goodwill Ambassador); Ólafur Ragnar Grímsson (Professor of Political Science, and yes a former MP). Ásgeir Ásgeirsson, who was also a teacher and academic was perhaps the person with the most political connection as his brother was a former PM. But unlike Australia, they are not all lawyers, only politicians.

Similar results emerged in Austria. For example, Hein Fischer is a Professor of Political Science; Thomas Klestil and Kurt Waldheim were all diplomats (and SG’s of the UN); Rudolf Kirchschläger was a judge, Adolf Schärf, who was born into a poor working class family, was a political prisoner and academic. Similarly, in Finland, Martti Oiva Kalevi Ahtisaari was aNobel Peace Prize laureate and UN Diplomat noted for his international peace work while Tarja Halonen (human rights advocate). Ireland has had a similar experience (think Mary Robinson). They have acted impartially and above politics in performing their required duties.

In fact, the Irish, Finnish, Austrian and Icelandic Presidents have been LESS political than some of our Governors General or even members of the Royal Family themselves. Unlike John Kerr, we have not had any Ministerial dismissals in these countries, partly because they were smart enough to codify their President’s powers so 1975-type scenarios are completely avoided. We do not hear directly elected Presidents claiming, like Michael Jeffrey, that:


“A British study found a direct statistical link between single parenthood and virtually every type of major crime, including mugging, violence against strangers, car theft and burglary. And the same is true ... in Western Australia”

Let's not forget that Jeffrey also expressed his views on homosexuality: a “sin” according to him. Nor do we hear any directly-elected Heads of State bang on about human rights despite being activists, like William Deane did. As opposed to the 1982 St. Lucian crisis, we haven’t seen directly-elected President’s having public slanging matches over government policy. The worst we have seen, maybe, is the President of Ireland telling the PM that she can “stare him in the eye” and “warn him”. This is no different to the Queen’s right to warn — which she did do with Thatcher in a public way over foreign policy. Directly-elected Presidents also don't give lovely speeches that contradict government policy in the way Charles and Andrew do on a regular basis. Constitutional monarchy is not above politics, but in politics. 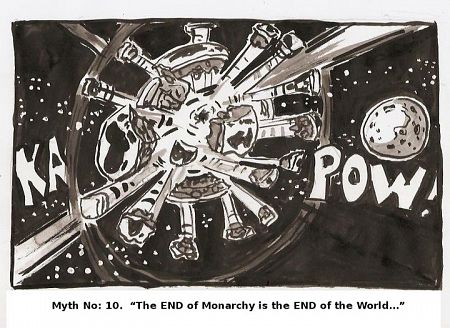 And, of course, there would be no need for a political Head of State if we adopted the Swiss system, as any contentious bills simply would be referred over to the people for referenda — leading to better transport, highways, hospitals and tax policy. This is the best check and balance to keep a tab on politicians.

My question to David Flint is this: why don’t you support the Finnish, Austrian, Swiss and Icelandic system of government? I think the answer is clear: he wants to give more power to the political class, and not the people.
REPUBLIC ACM David Flint Direct election Governor General Jeffrey Wood Margaret Thatcher Michael Jeffrey Prince Andrew Prince Charles Publius
Recent articles by