The Lucky Country and the Republic — 50 years on

The first edition of The Lucky Country was published fifty years ago in December 1964 by staunch republican Professor Donald Horne, who provocatively critiqued Australia as mired in mediocrity and manacled to its past. Half a century later republicans use his ideas to champion a progressive, reforming idea, writes history editor Dr Glenn Davies.

This republican speculative fiction anthology presents a compelling preview of the possible future of Australia as a republic (and a great addition to an Australian Summer Book Reading list). These five award-winning short stories show it is through speculative fiction that change can begin to how we see ourselves as a nation — now and into the future. 50 years ago, Donald Horne also speculated on Australian society including Australia’s republican future.

Donald Horne’s The Lucky Country was released in December 1964 as a Penguin paperback costing eight shillings and sixpence and caused a sensation with Horne’s words shaking Australia out of a self-satisfied reverie, questioning many traditional attitudes. The Lucky Country was serialised in The Australian and sold its original print run of 18,000 copies in just nine days. By the end of 1966, almost 100,000 copies had been sold — and over the next 30 odd years, another 160,000. The title almost immediately became part of the Australian lexicon, even if the irony was often lost, with Donald Horne being forever misquoted by everyday Australians.

Professor Donald Horne was one of Australia's foremost academics, historians and philosophers.

A staunch republican, he was born in the NSW Hunter Valley in 1921, studied at Sydney University and then forged a career in journalism becoming the editor of The Bulletin in the early 1960s. In 1973, Horne was made a professor in political science at the University of New South Wales. However it was the publication of The Lucky Country in 1964 that made Donald Horne Australia's most well-known public intellectual and got Australians thinking about themselves.

The year 1964 was when Rupert Murdoch launched The Australian and the Beatles toured to a rapturous reception. Apart from the shock of the collision between the aircraft carrier HMAS Melbourne and the destroyer HMAS Voyager, with the loss of 82 lives, these were the “comfortable and relaxed years”, to borrow a phrase from John Howard. The country was a few years away from the disruption of Vietnam-era protests and the coming to an end of Prime Minister Robert Menzies’ 23 years of conservative government.

Donald Horne captured the Australian experience of this time when, in his book, The Lucky Country, he wrote the following about the nation:

'Australia is a lucky country run mainly by second rate people who share its luck. It lives on other people’s ideas, and, although its ordinary people are adaptable, most of its leaders (in all fields) so lack curiosity about the events that surround them that they are often taken by surprise.'

Horne later said people remembered the first part of the sentence but ignored the warning in the second. This applies particularly among those who refer to the term the Lucky Country, meaning a nation that is mineral rich, so therefore ‘lucky’ in its natural wealth. Horne was critiquing an Australia that did not think for itself; a country manacled to its past; and 'still in colonial blinkers'. His words were meant as a wake-up call but were widely interpreted as an affirmation of the Australian way of life. They were meant to spark change, but instead produced a relaxed approach and a “she'll be right” mentality. In The Lucky Country, Horne dissected the mores of a country that was affluent and comfortable — but mediocre. Australians, he wrote, were too ready to settle for the “second rate”.

In the 1960s, republican activity was restarted by authors Geoffrey Dutton and Horne. In British Subject (Nation, 6 April 1963, pp.15-16). Dutton argued that Australia should declare itself a republic, elect its own governors, abolish the use of the word “British”, and substitute “Australian”.

No doubt Dutton’s 1963 article raised the idea of republicanism as an alternative, but it was Donald Horne’s The Lucky Country in 1964 that put the republican debate back on the public agenda.

In The Lucky Country, Horne argued that the ceremonial clinging to Britain was part of Australia’s 'delusional structure' and that, 'in a sense Australia is a republic already'.

Horne also made the original case for popular election of an Australian head of state, before discounting its likely effect:

'One might think that that such a dignitary (an appointed President) would have to be elected by the Australian people but the Australian political leaders might prefer to sneak him through a back door.'

Donald Horne proffers the minimalist approach of replacing the Governor-General with a President. He suggests a number of methods for selecting the President from appointment by the Prime Minister, appointment by both Houses of parliament, a national convention of State and Federal parliaments, and the direct method of election.

After The Lucky Country, Horne took up the republican theme in The Next Australia (1970); Death of the Lucky Country (1976), and The Queen and his satire His Excellency’s Pleasure (both 1977).

'... self-congratulatory on the moral advantages of belonging to the British Empire.'

Australian political dissatisfaction with Britain was expressed only within this context.

Great article by Julia Horne re her father Donald and the making of 'The Lucky Country' @financialreview http://t.co/ew4SLSiwkt

In Australia’s history republicanism has always been more than an argument for breaking our constitutional ties with the British Crown; it’s also been about how we can create an improved system of democracy that better reflects our values as a free, fair and multicultural nation. It’s been about a better future and how we can create it through a mixture of reflection, deliberation and decision. It’s driven along by the belief that we can do better and that our political imagination can be trusted to find a system that will inspire and endure.

Our opponents think we have reached the pinnacle of achievement and no good can come from a move to the republic. They fear change and prefer the past to the future.

If Donald Horne was to write his famous sentence from The Lucky Country today, 50 years on, the second half would appear to be still valid. Australians are still living on “other people’s ideas” when it comes to the attitude of many Australians towards the republican issue. However, through the National Republican Short Story Competition. the Australian Republican Movement has encouraged imaginative thinking of the sort we need also to apply to our institutions generally. How could they be better? How can we translate aspirations into goals? How can we achieve those goals?

Thinking and doing, doing and thinking – that’s the key to improvement! 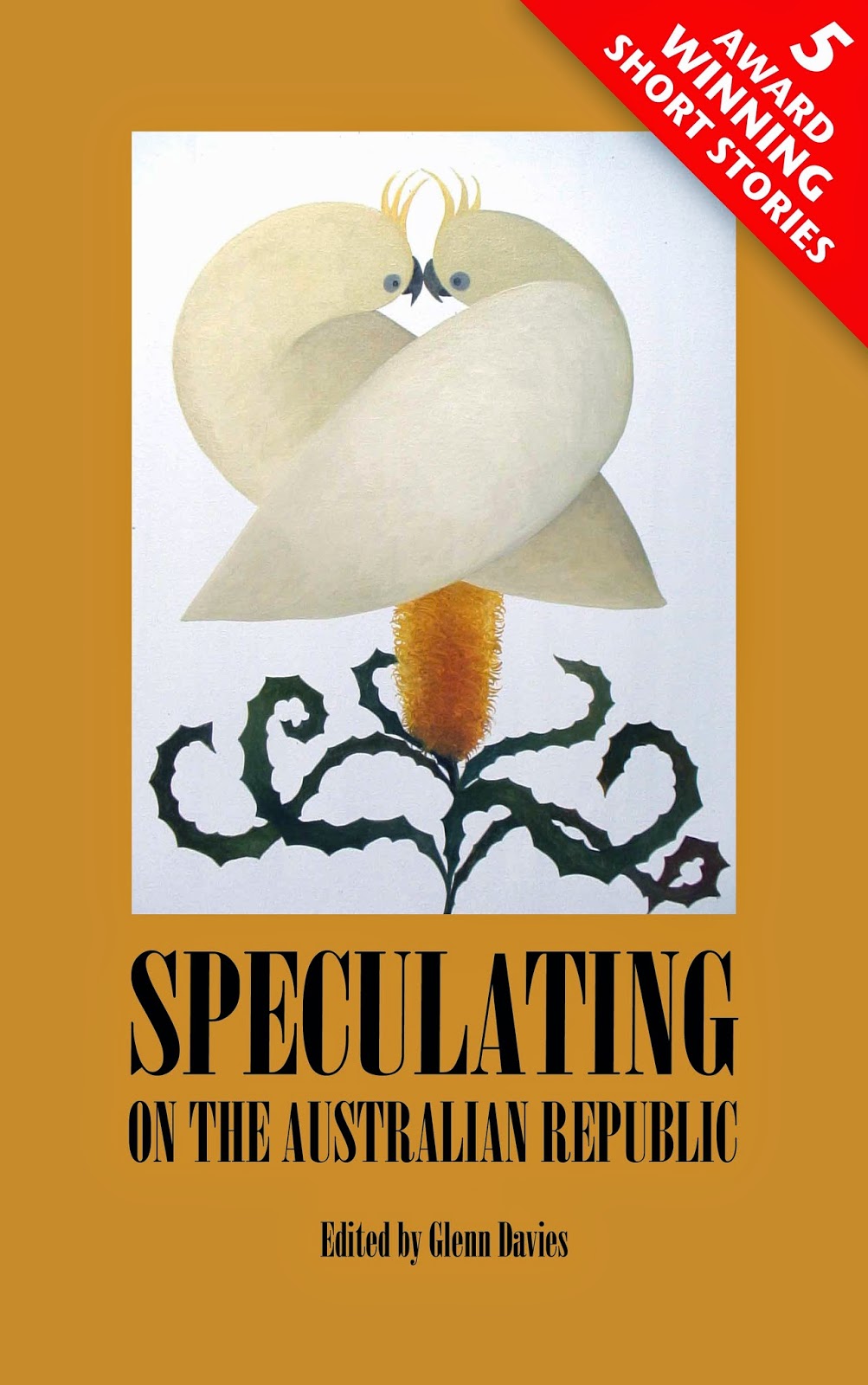 As the five prize-winning short stories in Speculating on the Australian republic show, it is through speculative fiction that change can begin.

We can’t achieve anything unless we imagine it first. Before every great invention and before every great journey is the idea. Without ideas and imagination, we are all trapped in the past.

So, for anyone interested in speculating on the possible futures of the Australian republic … read on.