The lazy "too many other issues" excuse

Our elected representatives saying we should delay a Republic because there are too many other issues is just a weak and timid excuse, says ARM chair Major General (ret’d) Michael Keating. 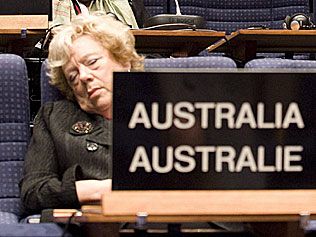 How many times have you heard the plaintive cry “there are too many other issues” to suggest we can’t possibly do whatever it is that is being suggested?

Unfortunately, this catch cry is all too often used as a feeble excuse to delay completing our national identity by becoming a Republic. It is a particular crutch for our elected representatives, who seem unable to separate party political advantage and nation building. They are often content to take the easy way out and mouth the “there are too many other issues” excuse to delay action.

But are there, in fact, too many other issues?

Well, it is true that there are always lots of issues confronting any government. It is also true that some of these issues are more pressing than the republic issue. It is true, again, that no-one wants the Government to ignore other pressing or important issues. It is equally true that no one is asking our elected representatives to drop everything else in order to tackle the republic issue. Concurrent activity is a principle of any good business planning. It is quite possible to devote a certain amount of effort to one issue while still giving attention and even priority to others. There is no rule saying that a government can only be presented with a finite number of issues at any one time. Members of parliament are elected to represent the interests of the people they represent—the people who elected them. In a democracy they should not pick and choose what issues interest them, or what issues are easiest, or what issues might get them re-elected. They should represent all the interests of the people. Somewhere between 60% and 80% of Australians want to pursue the issue of becoming a republic. Our elected representatives should be interested in the issue — regardless of how many other issues there might be at any given time.

So, what about priorities generally?

Yes, governments need to prioritise, but some issues will never be so immediately pressing that they unquestionably assume top priority — or even a place in the top five most pressing issues. That does not provide an excuse for never addressing them. We come back to concurrent activity. It is quite possible to address a number of less pressing issues concurrently with applying the major effort to the most pressing. Perhaps we need more women in government as they seem more capable of doing more than one thing at a time! If we wait for a most opportune time to do things we will spend most of our time waiting. The old saying "if you really want something done ask a busy man to do it" certainly has an element of truth.

And what is the actual priority of the republic issue? True, it won’t put any more money in anyone’s pocket immediately. True that it won’t change our daily concerns immediately. But that, of course, is true of many of the best things in our lives — love andraising a familycome to mind. Not everything has to advantage the bottom line immediately. Good things take effort and sometimes only bear discernible fruit over time. Without regard to personal material advantage, what is actually more important than our national identity? The Republic is our issue. No-one else is going to do it for us and no-one else is going to reap the benefit over time. It’s fundamental to our national well being and what is a greater priority than that when push comes to shove?

The ‘’too many other issues” attitude is at best a weak excuse. It suits the apathetic and the timid. It suits those who want to pursue personal agendas. It will not progress Australia.