The day of reckoning for the Children of Despair

Our Government, the Murdoch media and most of the Australian public don't care about children being abused under our care — if they're immigrants, writes managing editor David Donovan. 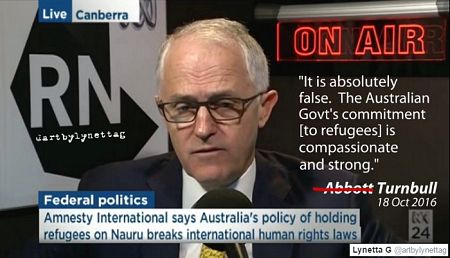 THIS WEEK, ABC Four Corners came out with another shocking report about vulnerable children being abused under the care of Australian authorities.

The ABC documentary, called The Forgotten Children, showed children in immigration detention on Nauru being in a state of abject despair. Due to poor facilities and conditions, inadequate health and education care, discrimination and abuse by officials and Nauruan locals, and a pervading sense of hopelessness due to having no prospect or timeframe for release, Four Corners revealed that many child immigrant detainees were self-harming, and attempting − and sometimes committing − suicide.

Of course, this testimony is supported by The Guardian’s August release of the Nauru Files, and a new Amnesty International report that called Nauru as an ‘Island of Despair’, said Australia was “leading a race to the bottom” and described our treatment of refugees as amounting to torture under the applicable UN Convention.

The last time this sort of report appeared on Four Corners – in its July exposé on abuses at the Don Dale Youth Detention Centre – the outpouring of shock and rage from the Australian community was so intense that the Turnbull Government immediately announced a royal commission into the affair. This time, however, the reaction from the public has been vastly more muted.

The authorities have been even more unmoved.

To begin with, the Nauruan Government described the report as “racist” and “propaganda”.

LNP senator Ian Macdonald says most of the "alleged incidents" on Nauru are "trifling in nature" (aka child abuse). #estimates pic.twitter.com/KtQGblIexs

Immigration Minister Peter Dutton fobbed off the reports of abuse with his trademark arrogance and total lack of compassion, calling the reporters “activists”. He also said the ABC was irresponsible because it declined the offer of new photos and video of Nauru from his department. Of course, no journalists (apart from “objective, respectful” ones, such as News Corps’ Chris Kenny) have been permitted by Australia’s client state to visit the island and film their own vision. Did someone mention propaganda?

And as for Labor, it simply stood behind the policy, abashed and abased, dolefully wringing its hands.

Prime Minister Malcolm Turnbull, meanwhile, rejected the claim that the treatment of refugees on Nauru amounted to “torture” and described Australia’s policies as “compassionate”. According to the PM, Australia’s open air prison on this tiny guano-caked island is vital because it saves people from the dreaded “drowning at sea”. Apparently, drowning in the ocean is far worse than putting children into such bleak despondency that they cut themselves, sew their lips together, overdose on pills, or set themselves on fire — all circumstances this latest Four Corners episode describes.

PM Turnbull is the same caring humanitarian who, on Tuesday, talked in Parliament about the objective of our latest joint Coalition military adventure in Iraq as being to “target DAESH and kill their fighters”. Not to overthrow, neutralise, capture or expel them, but to simply “kill” them. Like bugs.

Perhaps it is because they are “Islamist fighters”, as Turnbull described them, that no mercy or quarter will be given? Muslims these days, of course, being the abhorrent new “other” in Australian public life, at least according to the Government and the Murdoch media — the latter also having worked hard since Monday to muddy the waters and cast doubt upon the veracity of the Four Corners story.

But the most telling part of the Four Corners’ episode was the concluding statement by host Sarah Ferguson [IA emphasis]:

“Negotiations by the Australian government to find an alternative home for the children have so far failed. In the meantime, according to the Prime Minister Malcolm Turnbull the wellbeing of refugees on Nauru is the responsibility of the Nauruan government — not Australia.”

In other words, the Guantanamo defence, with Malcolm Turnbull starring in the role of George W. Bush.

One day – and it may not be too far away, if reports of lawyers looking at developing cases against the Australia Government in the International Criminal Court (and even our domestic criminal courts) are correct – there will be a reckoning for what our nation has done to the children of Nauru. And statements like Turnbull’s, disabusing responsibility for what are clearly the actions of his Government and its agents, will be seen for what they truthfully are — pitiless, self-serving deceits.

Read more about this issue in Greg Barns and Anna Talbot’s piece on IA − ‘Evidence shows crimes committed by our government on Nauru and Manus’ − HERE.