Suicide is not painless, Mr Morrison

Despite some weasel words, it is quite obvious Australia's inhumane refugee policies contributed to the suicide of Leo Seemanpillai, writes pyschologist Lyn Bender —Australians must insist "Never again!"

The M.A.S.H. TV series song, in keeping with its theme of the struggle of life against death, ironically suggests suicide is painless:

The suicide of Sri Lankan asylum seeker Leo Seemanpillai sends a very painful message. Leo’s whole life led him to this final step, but the current Government must be held responsible for its finale.

In particular, Immigration Minister Scott Morrison and Prime Minister Tony Abbott must confront their guilt for the murderous, dangerous, punitive treatment given to refugees. This cruelty even extends to the likely denial of a visa to Leo’s parents to attend their son’s funeral.

This is an absurd statement, given that the whole policy regarding asylum seekers is toxically political. Both sides have relentlessly played this evil game, with the stakes becoming ever higher.

"I will never subcontract out to other countries the solution of problems in this country."

Leo was caught in this political football game with ever changing rules. But it got worse for Leo as he became a victim of ‘enhanced screening’ for Sri Lankan refugees, set up by the ALP in 2013. Or, as the Guardian put it: 'enhanced trauma'.

The Coalition has brought the treatment of refugees to a hideous nadir.

But, according to Morrison, no responsibility for Leo’s terrible death, can be attributed to the  treatment of those who legally – yes, legally – ask Australia for asylum.

Morrison stated and I quote:

By inference, Morrison is saying we cannot presume as to what caused Leo to take his life. I beg to differ.

Whilst no one can categorically know what drove this man in his last hours to make this final choice, there is ample research backed knowledge of suicide risk factors. There is also the documented damage of detention and temporary protection. The minister would have to be intentionally deaf, blind, and unfeeling not to be aware of the pain and isolation of uncertainty, under the current government refugee policy. But then they have sacked the IHAG – the Immigration Health Advisory Group – so they will no longer be advised by experts on refugee health. Morrison has also cut funds to the Refugee Advisory Council, despite having guaranteed their funding a few weeks earlier.

In a past life, I worked directly in the area of suicide prevention and bereavement for over ten years. I was manager of Lifeline Melbourne, with clinical oversight of the Suicide Help Line.

I also spent six weeks in 2002 at Woomera Detention Centre, working as a Psychologist. Hunger strikes and suicide attempts were a daily occurrence.

In response to Morrison's uninformed statement, in fact years of investigation experience and evidence has yielded us detailed knowledge of suicide risk factors.

Factors that mitigate against suicide include:

Psychologist Edwin Shneidman analysed suicide notes and identified the following themes regarding the mindset of the suicidal person, calling it "psychache":

People who commit suicide commonly – paradoxically – don’t wish to end their lives. They are seeking an end to their pain. It can be a final cry and message to those left behind.

In my time at Woomera Detention Centre, suicide had become part of the everyday culture. Detainees spoke of their hopelessness and despair, and many – including children – made serious suicide attempts.

Like many asylum seekers, Leo was at a high risk.

He confided his depression and severe anxiety to friends. He was hospitalised. Leo was in limbo for eighteen months on a bridging visa. He was given no hope of a family reunion, and no certainty of future circumstance. Leo was terrified he would be forced to return to Sri Lanka.

His fear of being forced back by Australia is not surprising, given the rhetoric of Morrison reported in Fairfax.

"Anyone who may have come from Sri Lanka should know that they will go back to Sri Lanka. We have an arrangement with the Lankan government and … we'll be ensuring that we maximize those who go back and, preferably, they will all go back."

A friend and supporter of Leo, Aran Mylvaganam, of the Tamil Refugee Council, is quoted in a report in the Guardian:

“So many of the Tamil asylum seekers have been telling me for a long time they would prefer to die here than be sent back to a Sri Lankan torture chamber.... I always hoped that these were just words. But it seems that’s not the case.”

Leo also make clear his desire to donate his organs after his death — which he did. It’s sadly and poignantly symbolic that, thus, a living part of him remans in Australia; that he has tried to save the lives of others.

Psychologist – and suicidologist – Edwin Shneidman pioneered the psychological autopsy after suicide. The picture of high risk is easily seen in this case. From his early life Leo, suffered from traumatic circumstances.

Leo’s Australian ‘mum’, retired art teacher and volunteer Cathie Bond, relays the following information about the deceased from her conversations with him:

"Leo was born in the northeast of Sri Lanka in the midst of a civil war. His family were farmers. During the worst of the bombings, his father wrapped baby Leo in banana leaves and hid him in the jungle.

"The family fled to India when Leo was around five, to a refugee camp in Tamil Nadu. It was a way of life he described as 'always cold, always hungry'.

He turned to Australia – a country that is a signatory to the Geneva Refugee Convention – and Australia betrayed him.

In April this year, another Tamil asylum seeker self-immolated in Sydney. He is still in a critical condition. The method and details were clearly known and reported. Self-  immolation is an extreme act of protest.

But Morrison does not give attention to or heed protest.

Phil Glendenning of the Refugee Council claims that 1200 Tamils had been returned since last October. Some have been imprisoned or disappeared.

Aran Mylvaganam, who sat by Leo’s bedside as he died, said in an interview on the ABC:

“I know beyond doubt that what was in Leo’s mind all the time was the fear of being deported back to Sri Lanka.

"Nine out of ten refugees get told by Australian Immigration officials that you would be better off going back to Sri Lanka."

Despite convincing reports of human rights abuses, Abbott maintains Sri Lanka is safe for returned refugees. Several Commonwealth countries boycotted CHOGM because it was held in Sri Lanka. But, nevertheless, Australia donated patrol boats to Sri Lanka at the CHOGM, presumably with the aim of catching fleeing refugees.

Of course, Leo Seemanpillai found himself in a "very difficult circumstance" for most of his life. His diary was left open on his bed. It charted his pain day by day. Leo craved a safe life. He must have given up.

We should be saying never again to Morrison and Abbott — and also to the Labor Party which supports the policy of punitive deterrence.

The diabolical  policy of punitive deterrence should be stopped, or it is highly likely case like Leo's will happen again — soon.

Readers seeking support and information about suicide prevention can contact Lifeline on 13 11 14 or the Suicide Call Back Service on 1300 659 467. You can follow Lyn Bender on Twitter @lynestel. 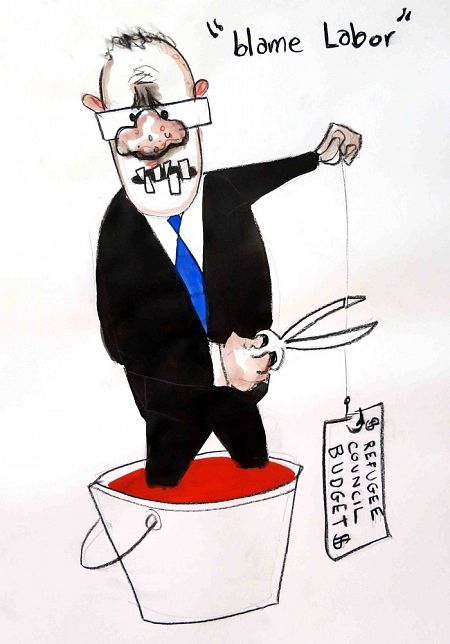 A selection of John Graham originals (including the one above) may be purchased from IA's online store. (See more of John's political art on his Cartoons and Caricatures Facebook page.)