Street artists are not vandals

Melbourne is one of the best street art cities in the world, with one of the most oppressive penalties for graffiti, says artist CDH. 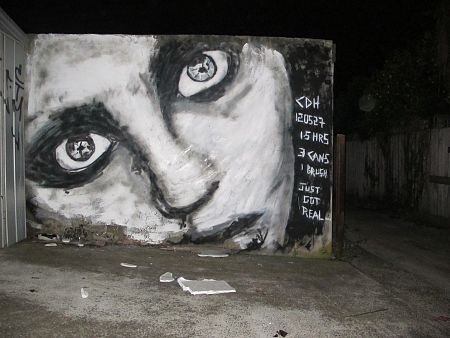 MELBURNIANS are often surprised to learn that our city is vying with 4 or 5 other contenders for the title of best street art city in the world. Indeed, The Lonely Planet guide to Melbourne now lists our street art laneways as the number one tourist highlight. At the same time, the State Government still hands out prison sentences of up to two years for graffiti offences. Sometimes you just have to take a step back and appreciate the comedy of the whole situation.

Under the state laws, propriety in street art begins and ends with property rights. Unsolicited painting is automatically designated as vandalism and so permission acts as a transformative switch between art and its antithesis. To test this notion, 19 other graffitists and I left a collaborative artwork at the entrance of the NGV recently. Although unsolicited, the NGV thought it worth taking inside and exhibiting in the foyer for 5 days. Contrary to the State Government, permission is not a prerequisite for art in the eyes of our foremost cultural institution. Marcel Duchamp (a French Dadaist and Surrealist artist) used to transform walls and light posts into art by adding his signature to them. Today we call that ‘tagging’ and rather than uplifting everyday objects to the status of art, it apparently degrades them into cultural detritus. In the 1930s, Arthur Stance used to walk the streets of Sydney prolifically writing the word ‘eternity’ on everybody’s property. In homage to his work, the Sydney Harbour Bridge was illuminated with the word ‘eternity’ as part of the millennia celebrations in 2000.

In 1984, Keith Haring visited Melbourne. At the time, Haring was most famous for his graffiti in the New York subway system, but he was embraced by Melburnians and invited to paint the water wall of the NGV. These are canonized Western artists, but today they would just be hauled off in the back of a divvy van.

I frequently create unsolicited street art. Unlike the Victorian Government, I regard this as a civically minded act — the opposite of vandalism. If it’s crime, it’s Robin Hood crime. I believe that if a wall is in an extreme state of disrepair (tagging, peeling paint, cracks) the owner might as well hang a sign on it that says ‘paint whatever you want here because I don’t care’. The owner is either unwilling or unable to maintain the property.  Express consent isn’t necessary, because tacit indifference to the wall’s aesthetic has already been demonstrated. Some people might prefer a beige wall but everyone agrees that a mural is better than a dilapidated wall, symbolising community neglect. This is an aspect of street art that many outsiders don’t understand; most high-end street artists I know are highly altruistic. Outsiders often lump all unsolicited painting under the single banner of ‘graffiti’ and then argue it degrades perceptions of community safety. In reality, there are a range of distinct subcultures within this categorisation and, legal or not, high-end street art is derived from a civic consciousness. It’s symbolic of a healthy society. It’s ignorant to associate street art with crime or urban dilapidation and street art shouldn’t have to continue to accommodate other people’s prejudice.

A society’s tolerance of graffiti also reflects its magnanimity and freedom for cultural dissent. Without the community ethos from which street art is derived, we’re left with an oppressive, culturally vapid, void-space like Docklands; a ghost town populated with cheque-book art.

Street art is an important part of Melbourne’s cultural legacy, but almost nothing is being done to preserve it. The custodianship of street art is effectively left to privately contracted cleaners, who are unqualified and generally uninterested in distinguishing preeminent artworks. The inadequacy of the City of Melbourne’s policy was demonstrated in 2010, when council cleaners mistakenly removed an artwork by internationally renowned artist Banksy, against the express wishes of the building owner. Another Banksy artwork was lost earlier this year in the City of Stonnington, because no effective street art register exists there either. There have also been countless other culturally significant losses that have garnered less publicity. Local councils have a tendency to hide behind the argument ‘street art is ephemeral’ in the wake of losses. It’s true that street art is ephemeral, but that places a greater onus on these civic bodies to responsibly document the artworks, not a convenient excuse to erase our cultural history.

In 2007, with the support of both major parties, the State Government enacted the Graffiti Prevention Act, which grants police the power to search people for ‘graffiti implements’ without warrant. Merely possessing an implement which could be used to commit vandalism is a crime and the onus is then on the accused to provide a ‘lawful excuse’; in effect, to prove their innocence. This law overturns one of the fundamental tenants of our legal system — the right to the presumption of innocence.  The penalties under the law are draconian: up to two years imprisonment, a punishment commensurate with a minor assault. By comparison, in New South Wales and South Australia, the maximum sentences are six months. 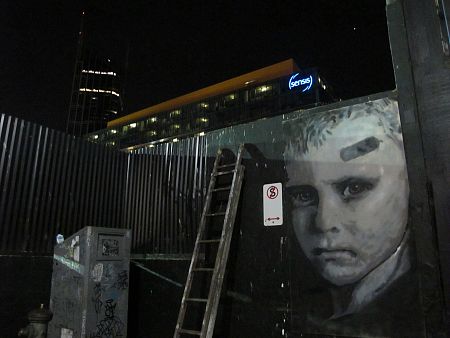 But this joke has a good punch-line — graffiti vandalism appears to have only increased under the new law. For the three years prior to the introduction of this law, the average number of reported graffiti offences was 4,400 per year. Following its introduction, this rose to an average of 6,900 a year (57 per cent higher) although the act did not expand the definition of ‘marking graffiti’, the major component of the graffiti offences. Another independent metric tells the same story: requests for graffiti removal at the City of Melbourne averaged 500/year for the three years prior to the law’s introduction and now average 1,050/year over the 4 years since its roll out (more than double). Correlation does not prove causality, but there’s at least anecdotal evidence that the severe laws may in part contribute to the rise by encouraging the risk-taking, machismo, tagging culture.

As one tagger simply put it:


“…the heavy laws just made it cooler”.

This law is against our principles of justice, it’s draconian, it doesn’t differentiate culturally valuable street art and its efficacy is dubious at best.

A debate currently exists in the fine art community over the status of street art as art. As an example, 6 board members of Museum of Contemporary Art, Los Angeles (LA-MOCA) recently resigned in protest over the ‘populist’ curatorial course set by the new director Jeffrey Deitch. Deitch curated a major street art retrospective last year, along with smaller, pop influenced shows. Jonathan Jones, an art critic for The Guardian has said ‘to celebrate [street art] is to celebrate ignorance and aggression’. 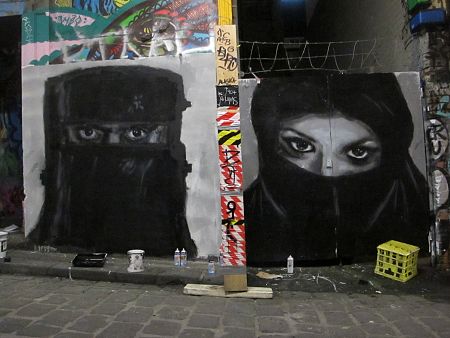 In an historical context, new movements are typically met with hostility. They dispossess an established hierarchy of its influence and qualification. Consider the obstructionism and derision heaped upon the Impressionists, Cubists or German Modernists in their time. Street art goes further and also rejects the mechanisms around contemporary art. Street art purists aren’t trying to sell anything, so we operate entirely outside of the private gallery hierarchy and the contemporary art market. This offers new freedoms to the artist because, consciously or not, when artists operate within commercial frameworks, they inherently need to appeal to collectors and curators. This pollutes a complete artistic vision. Street art offers a second system of art — a vehicle to share art with everyone without the compromise of needing to appeal to anyone

The system of street art is attractive to me because it offers a very pure form of artistic expression. Unsigned street art in particular contains a selflessness and earnestness; it’s born of the innate human desire to create. There’s no sense that an artwork could have been made for money or other self-interested reasons. Street art better integrates into real human experiences; you see it while waiting for a friend, or riding a train, in the gaps of everyday life. It’s accessible, both in a psychogeographical sense (it’s not in an exclusionary gallery space) and a thematic sense (it’s rarely esoteric or obfuscated).

The transience of the medium reflects the quintessential mortal experience and requires the viewer to appreciate the art in the moment. The art must exist in a specific spatial context so it can derive additional meaning from the societal environment, rather than existing in a generic, artificial gallery space. The art also feels sanctified by the sacrifice made by the artist in handing it over to the mean streets. Jean Debuffet argued 50 years ago that high art was exhausted and acclaimed graffiti as raw art. For me, this rawness is the most important aspect of street art. Painting illicit work offers a heightened state that brings grittiness and a visceral truth. The concept might be decided before but, in execution, the physicality and time pressure mean that artistic decisions are made directly, without the interference of the consciousness. Sometimes, it feels like I’m painting in a hyper-real dream state, entirely consumed in the moment, in a way that I can’t replicate in other aspects of my life.

In Paris, in the May 1968 protests, an anonymous Situationist graffitied the words: ‘Beneath the pavement, the beach.’ What lies beneath Melbourne’s pavement? Behind the thin veneer of a freshly buffed wall, our street culture keeps seeping through. Councils have to keep repainting the façade. It’s exciting to imagine living within the romanticized art periods; life in the factory with Warhol in the 60s or Toulouse-Lautrec and the Bohemians. These cultures germinated in the dirt, beneath the pavement and grew up through the cracks. They were organic counter cultures, resisting an insipid hegemony. The same conflict replays today, with the same central truth. Beneath our feet exists a strong, vibrant subculture filled with a sense of excitement and change. We have an opportunity to be alive within the pages of history, if we just open our doors to the street.

(You can read more by CDH on his blog www.cdh-art.com.)

Street artists are not vandals

29 September 2012, 7:06am Melbourne is one of the best street art cities in the world, with one of the most ...
Join the conversation
comments powered by Disqus
News updates