Today, 7 June 2015, is the 20th anniversary of former Prime Minister Paul Keating's 'The Way Forward' speech to Federal Parliament, which laid out his vision for Australia’s republican future. History editor Dr Glenn Davies looks back on the very republican 1990s.

FEW PRIME MINISTERS have provoked such strong public reactions as Paul Keating. Even fewer have presided over such dramatic changes to Australia’s economy and society. A self-professed "big picture" person, Keating had his eye directed towards the future and not the past, to Australia, and not over his shoulder back to Britain.

In his speech to the National Library Twenty-Fifth Anniversary Dinner on 13 August 1993, Keating stated:

“If we can't imagine we can't determine our future, we can't act, we can't change. And we'll fall behind."

Republicanism emerged as an issue of major public debate during the 1990s. Australians have long discussed the idea of replacing the constitutional monarchy with a republican constitution, even during the 19th century, before federation in 1901. In the 1960s, republican activity was restarted by authors Geoffrey Dutton and Donald Horne. At the same time, the student magazine Oz lampooned the monarchy. A decade on, the dismissal of Prime Minister Gough Whitlam by the appointed Governor-General on 11 November 1975 outraged many Australians.

The 1975 Constitutional Crisis drew attention to Australia's Constitutional arrangements and, since those turbulent days, several notable Australians declared a commitment to an Australian republic. There were many Town Hall meetings and calls to "maintain the rage". During these years, the Australian Labor Party edged towards declaring itself for the republic. This it eventually did in 1982.

In the 1990s, the popular definition of "republic" was simply the removal of the British monarch as Head of State. This was seen as the last step in Australia’s political development. On 7 July 1991, the Australian Republican Movement was established, with the author Tom Keneally as the Inaugural Chair. The Australian Republican Movement was formed as an organisation with the single goal of Australia becoming a republic no later than 1 January 2001.

In December 1991, Paul Keating was sworn in as prime minister of Australia after deposing Bob Hawke as leader of the federal Australian Labor Party. 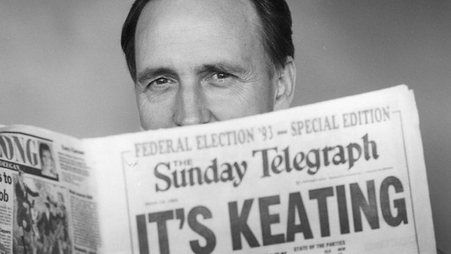 As Keating came to power in the early 1990s, his support for the republic and issues of national identity was widely known, and he continued to campaign for it throughout his time in office and beyond.

By February 1992, Prime Minister Keating was calling for a new Australian flag, stating that the presence of the Union Jack in the corner of the flag was appropriate for a colony, not for an independent nation like Australia. He also gave a speech during the Queen's visit to Australia in 1992 in which he referred to Australia’s outlook being “necessarily independent”. Around the same time, he announced Cabinet's decision to amend the Citizenship Act 1948 (Cth) and the Oath of Allegiance to remove all references to the Queen.

Under Keating, the republic was part of a progressive policy approach toward the Australian national image, which also included reconciliation between Indigenous and non-Indigenous Australians.

In April 1993, Prime Minister Keating appointed the Republic Advisory Committee, led by Malcom Turnbull, to examine options on how to achieve a republic with minimal constitutional change.

The Republic Advisory Committee published its report in 1993, in which it stated:

“... a republic is achievable without threatening Australia's cherished democratic institutions”.

On 7 June 1995, the Prime Minister of Australia, Paul Keating, formally announced his support for an Australian Republic in a televised speech to Parliament entitled 'An Australian Republic The Way Forward'. This was the culmination of nearly a decade of discussion on constitutional change. In the course of his speech to the House of Representatives, he announced his government’s intention to transform the Commonwealth of Australia from a constitutional monarchy into a republic. His only concession to the European and British past was

"... that the Australian republic retain the name “Commonwealth of Australia. 'Commonwealth' is a word of ancient lineage which reflects our popular tradition and our Federal system."

This is the final step to becoming a fully independent nation. It will permit the full and unambiguous expression of Australia's national identity.

The Government is releasing its proposals as a focus for further public discussion and debate. All Australians should participate in this important national debate.

Keating proposed a minimalist plan for a republic, concentrating on the single task of installing an Australian as head of state, one with the same role as the governor-general. The intended transformation was targeted to occur before the centennial celebrations in 2001. The President of the Commonwealth of Australia would be nominated by the prime minister after consultation with all parties and elected by a two-thirds majority at a joint sitting of Parliament. The reserve, or discretionary, powers of the governor-general, including the power to dismiss a prime minister, would be transferred to the president without being spelled out in the Constitution. All the other features of the Australian Constitution would remain unchanged. The States would be allowed to determine their own constitutional arrangements and to retain a link with the Crown if they wished, and if the monarch consented.

On the John Laws radio program on the morning of the speech, Keating justified his minimalist position with reference to the Westminster parliamentary systems foundation in a representative democracy: 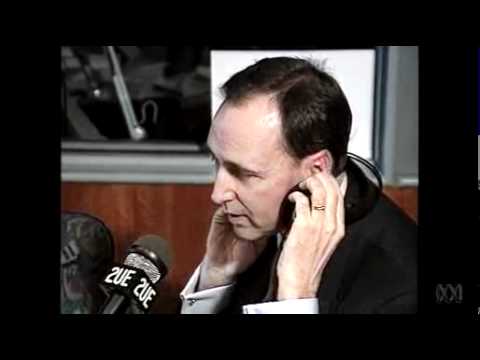 What you have got in Australia is a representative democracy. You have got each MP coming from their constituency to Parliament and you can see how the Parliamentary system responds to public opinion. It is a diffuse parliamentary system in which no person is elected (at large). For instance, I was not elected prime minister. I was elected a member of my party. My party appointed me as leader and the Governor-General appointed me as prime minister. I am not standing here speaking to you as the elected Prime Minister. Nor are any ministers elected. The obvious point in that is if one doesn't remain relevant, one changes.

The same with opposition leaders. Just take the Opposition. They have had now three leaders in this term of Parliament because the other two were no longer relevant or they thought useful. The same goes for the Government. You saw in the last Parliament, Mr Hawke removed by the caucus where I was installed. I could be removed myself.

In other words, there is a healthy assessment by a large group representing the community in a representative way from each constituency which gives a real living feel to our democracy day in and day out.

“... tend to feel that there is room for manipulation within the Parliament.”

Within this cynicism is founded the position for the direct election model for an Australian Head of State.

The 1998 Constitutional Convention helped to strengthen the debate for a republic as a major issue in the late 1990s. However, the debate became caught up in an argument about the best selection method for the Australian Head of State and on this crucial issue republicans divided.

'The Way Forward' speech was the moment when distinct camps formed over proposed republican models and the division between republican models began. Paul Keating’s minimalist position with appointment of an Australian Head of State by 2/3 majority of parliament was to be the position that would be presented at the referendum on 6 November 1999.

In March 1995, the alternative model to the Keating government’s two-thirds majority parliamentary vote was backed by the Federal Leader of the National Party, Tim Fischer — that is, a ceremonial president elected by popular vote. In the process, Fischer added legitimacy to a republic and his comments were a tacit acceptance that a republic, sooner or later, was inevitable. Fischer’s entry into the republican issue, along with Victorian Premier Jeff Kennett and a former Governor-General Sir Zelman Cowen, who proposed that upon Bill Hayden’s retirement as governor-general in 1996 that Keating should allow the Parliament to vote in his successor rather than choose his own candidate, meant that the conservative side of politics was now involved in a genuine dialogue about the republic.

This bipartisan development gave the republic a growing air of legitimacy, however in proposing an alternative, direct election model the field was opened for dissent and argument over republican political models. In the absence of a proper process to resolve those differences, Australians rejected the 6 November 1999 referendum, 55-45 per cent.

No political leader has subsequently emerged who wants to find common ground amongst Australian’s with respect to the different republican models and to break the logjam. This is where it has remained frozen for more than a decade.

In 1995, Paul Keating’s views on the republic were clear:

“Our Head of State has to be one of us."

He re-emphasised during a Centenary of Federation speech on 30 November 2000:

“I will be arguing as strongly as possible for the preservation of the Westminster system of a Cabinet headed by a Prime Minister and drawn from the Parliament rather than a popularly elected head of state.”

There are three main models. The first is sometimes called the "bipartisan model" and was the proposal put to the Australian people in the November 1999 republican referendum. Under this model, the head of state’s appointment must be approved by a 2/3 majority of federal parliament. To its proponents, the appeal of this model is that it upholds the principle of continuity and is also more likely to produce a non-party political, unifying figure as head of state.

The second is the "direct election model" that proposes that any citizen with the required amount of nominees may run for head of state in a direct vote of the Australian people. The reserve powers would be codified along the lines set out in the Republic Advisory Committee Report of 1993. The list of nominees would be unmediated by parliament.

Finally, the "McGarvie model" proposes the most minimal change, where the prime minister alone selects who should be the head of state. This model is likely to appeal to those who think the change should be as minimal as possible, thereby (it is argued) preserving as much as possible of our current successful system

Twenty years after Paul Keating’s 'The Way Forward' speech proposed the establishment of a parliamentary republic model, there still appears dissent over a political model for an Australian republic.

This seems a very long time.

Perhaps a way to break the logjam is to have a national plebiscite asking Australian’s simply: 'Do you want Australia to become a republic?'

If this is answered in the affirmative, only then start having a national conversation on political models.

We need to follow the advice of former Prime Minister Paul Keating and first determine what we want our future to look like and then we can act to bring about the change required.

If we don’t, we’ll fall behind.