Oprah Winfrey has gone away, and David Donovan says now is the time to ask ourselves—what just happened then?

THE Australian Government, the NSW Government, Qantas and other parties interested in promoting Australian tourism recently paid $43 million to the US daytime talk-show host Oprah Winfrey – one of the world’s richest women – to visit , travel around Australia – along with 303 lucky American studio guests – and film some programmes in this country. After a brief stay, she and her guests flew out on Wednesday. The tour has been declared an enormous success.

In pure marketing terms, it is difficult to disagree. According to figures bandied about on the ABC’s 7.30 Report on Tuesday, the publicity generated by Winfrey’s tour has already made the tourism industry many times the initial investment. Moreover, the subsequent publicity generated by Winfrey’s 180 million person worldwide television audience is likely to provide excellent exposure for Australian locations when her programmes are screened. Tempering optimism about the potential benefit must be the relative weakness of the US currency and economy and the presumably low average incomes of the typical US daytime television demographic – the unemployed or otherwise unwaged – which may mean that the any US tourism surge is lower than perhaps projected. In any case, the initiative seems sure to be a marketing success story.

But beyond the Government outlay, what has it cost us? Well, some may say, perhaps a degree of frustration with the media because, despite the crowds and the attention, the vast majority of Australians are probably not besotted with Oprah Winfrey. Every minute of her tour was broadcast and reported with same sort of breathless media coverage you might anticipate for a moon landing, or perhaps man’s first sighting of alien life, but most certainly not for a visit from a foreign celebrity—a mere talk-show host.

More disturbing than the Australian media’s predictably over-the-top reaction was our Prime Minister’s performance with respect to Winfrey. Despite Julian Assange having just been locked up in a London gaol and Wikileaks publishing diplomatic cables that day featuring her and other members of the Australian Government, Julia Gillard still found time to meet the American celebrity almost as soon as she arrived in the country. A casual observer would have thought Gillard was hosting an important world leader. 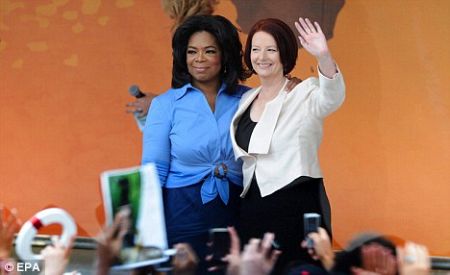 A world leader, indeed, of far higher status than the Australian Prime Minister herself, it seemed by the way Gillard fawned and doted on her. Although, Gillard also snuggled up to Bono from U2 a day or two before, so perhaps all this was merely an indication of how desperate our beleaguered PM was to have someone else’s popularity rub off on her. Still, pretty demeaning for the country—making us look like we are such small beer that our PM ftops everything to meet visiting US talk show hosts and Irish rock stars at Airport arrivals like a starstruck groupie.

Why have they all gone gaga over Oprah Winfrey? Have they been talking to Kitty Kelley, the American unauthorised biographer of Winfrey, who on the 7.30 Report this week made the fantastic statement that Winfrey was in fact more powerful than the US President? What absolute bollocks! Winfrey is powerful, yes, but only as powerful as a popular US daytime television talk-show host could be— she is not a world leader. Winfrey’s power is, in short, the power to sell stuff. And that was whole idea when they got her to come to Australia to promote tourism in Australia, wasn’t it? Let’s be realistic—she’s not going to bring world peace, cure cancer or solve the energy crisis, she only has the power to influence some people somewhat.

Winfrey’s career in a nutshell: she started out as a newsreader, got a gig on a Chicago talk-show and gained notoriety by interviewing famous people. Professionally, you might call her a tabloid journalist (and rather a good one). Beyond this, she appears to have only two observable skills. Firstly, she has the knack of eliciting empathy from her viewers—those poor bored people stuck at home watching daytime TV every day. She does this by being unremarkable and unthreatening. To her viewers, she comes across as Ms Anyone made good—not that smart, not that thin, not that good looking and, in short, not really that different from them. In this way, she gives many poor lost souls at home watching TV during the day the encouragement to believe that they too can succeed. Of course, this is a skill not to be diminished, and can be equated to a televangelist—another sort of salesperson. Her second talent is her flair for self-promotion—she is somehow able to turn any interview with anyone, no matter how famous or talented, into a discussion about her life and values. You could say she takes a little lustre from every star she sees and adds it to her own, making her star shine ever brighter.

So, what does it say about us that we become completely barmy and weak-at-the-knees when this, well, really rather commonplace celebrity visits our country? Winfrey herself said she had never had this sort of reception anywhere else. I absolutely believe her—it is hard to imagine her attracting the sort of attention we saw in Australia almost anywhere else in the world. In Australia, hordes of people lined the streets and we saw 350,000 Sydneysiders enter a lottery just to be in the crowd at her Sydney Opera House show. It staggers the mind, really.

I am left with questions. Like, are we so starved of A-list celebrities in this country that we roll out the red-carpet, wear funny hats and costumes and shout ourselves hoarse no matter which famous person walks through the arrival gates? And, is it really necessary for commercial media to break from regular scheduled programming to cross to a celebrity petting a koala? Also, should our Prime Minister possess enough gravitas to not look for a photo opportunity with every visiting A-list celebrity?

The answers appear pretty obvious to me.

It seems like Australia – or at least our media and our Government – is very much lacking in self-confidence and self awareness. They give the impression of people looking out at the distant world and feeling isolated and lonely with the desperate need for the world to look back at them—know us, love us and tell us we’re special, please! This exhibition of neediness and insecurity makes me cringe with embarrassment.

Certainly, invite Oprah to Australia, let her make her shows to promote Australia and treat her with the respect that is her due. But don’t go over-the-top and delude yourselves that she is someone of huge and unfathomable importance that we should revere like a visiting deity. By doing this, we sell ourselves short and demean ourselves as a nation. And every time our Prime Minister looks like a supplicant before a visiting American talk-show host – or indeed Irish rock star – we look like more and more like a tin-pot country with no sense of its own worth. Is this a negative when we are marketing ourselves to the world? Possibly, but even if it isn’t, no marketing benefit should be worth sacrificing our dignity and national pride.

Let’s grow up. We have a great country here and we don’t need celebrities from America, or anywhere else, to come here to reassure us about that obvious and certain fact.
AUSTRALIA MEDIA Australia Australian media Julia Gillard United States
Recent articles by