It’s a bit sad that our southern city bears the name of a drudge like William Lamb, writes GJ Burchall. Maybe it's time to give the old town a new moniker?

THERE IS little doubt that the last 12 months have been an unsettled year for Melbourne, as it marks off 186 years of European settlement.

From double-donut COVID days to lockdown number six, from AFL grand finals in other states to a fashion-free Melbourne Cup. A festival-free arts zone. An agoraphobic ordeal. The old town deserves a prize for tenacity.

But: What to get? What to get? What gift to mark the august occasion of the town’s first tentative steps as it emerges, blinky-eyed, from a dragged-out, shut-down pandemic funk into its brave new whirl? Something marvellous and practical, something to celebrate its re-birth.

It took some time to ponder — many lie-awake nights, much workshopping, brainstorming and think-tanking with erratic steering committees, gratuitous inquiries, non-royal commissions and serious drinking sessions. And finally, it came — a new name.

Well, why not? Whole countries change their monikers sometimes (for example, "New Holland").

William Lamb was 2nd Viscount Melbourne (Lord Melbourne) and a Whig – a political party apparently named after its members’ elaborate headgear. He’d been a bit of a laughing-stock because his wife, Caroline, had a very public affair with libidinous poet Lord Byron. (It was Caroline Lamb who branded the rascal “mad, bad and dangerous to know”.) Melbourne – and the Whigs – always sought to plough the middle ground.

When he became PM in 1834, Lord Melbourne stomped down on parliamentary reform, tried to suspend that pesky habeas corpus and had about 1,000 rural rights protesters arrested and put on trial for sedition (most of whom were found guilty and transported to Australia, where they probably ended up as bushrangers, union leaders, gameshow hosts, writers and other reprobates).

Melbourne became the last British prime minister (but not the last Australian one) to be dismissed by a monarch when another William – William IV – benched him and called in the Tories — who proved to make an even worse mess. So Melbourne was brought back for another crack from 1835-41.

All in all, it’s a bit sad that the southern city bears the name of such a drudge — still, it is something of a minor miracle its river was named "Yarra" instead of Thames, Tweed or Wye.

Melbourne's most famous waterway could be in for a name change. @EmilyGayton #9News pic.twitter.com/AKJ3SDvYiT

Lamb’s Melbourne – a South Derbyshire market town of 5,000 types – is the birthplace of that intrepid traveller Cook (Thomas, that is) and painter William Dexter, who pops up in 1853 Bendigo, exhorting republicanism to a meeting of disgruntled gold-diggers. In 2013, Melbourne was placed number 15 on a list of England’s “most liveable” towns.

In the new Melbourne, misplaced loyalty to “home,” plus a dearth of imagination, resulted in most of the city’s suburbs being named after British towns or districts. A grand opportunity to give a unique identity to new settlements squandered. Not just here, of course — all states were incurably infected. It must have miffed the far-northerners that the colony had already nabbed "Victoria" – they had to resort to "Queens-land" to pay an appropriate sucky tribute.

Over in the west, they said: “We’re over in the west. How about 'Western Australia' for a name?” Adelaide said: “We get it! We’ll be ‘South Australia.’ But only to the halfway point, then it’s no longer really south. Better call that ‘Northern Territory’.” As for New South Wales — one can only assume there must be a striking resemblance. Perhaps the coal mines.

New York appears to have little or zero in common with its British antecedent. Originally, Zealand is an island – home to Copenhagen – in the Danish Straits. However, with uncanny accuracy and without the advent of the Global Positioning System (GPS), NZ’s main islands were named North and South.

It’s only plucky little Tasmania that was named (twice) after anyone who actually had any connection to it. First, as Van Diemen’s Land for the Dutch East Indies governor-general who sponsored the exploration of Abel Tasman, who named the island after his patron, and second when Tasman was so honoured himself. Two painless name changes.

Australia is indeed blessed that it didn’t have the onerous task of naming 50 states, as did the U.S. It could have ended up with North West (no – sorry – Kim and Kayne’s kid has that one), Southeast Australia, Westnor’West Australia, SouthsouthEast Australia, North-by-Northwest Australia, True Magnetic North Australia. Box that compass. 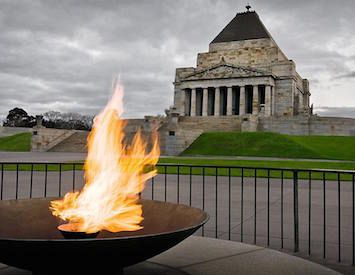 Most liveable city's heritage under threat from Crown skyscraper

Plans to build Australia's tallest skyscraper in Melbourne will overshadow the Shrine of Remembrance and chip away at Australia's heritage.

In fact, it is in North America that we find any other extant Melbournes: from the mainly French-speaking ville, in Quebec – settled by post-famine Irish immigrants and birthplace of slapstick success Mack Sennett – to an Iowa town of 830 which boasts of being the smallest municipality in the U.S. to have had an openly gay mayor.

A more major Melbourne is in Brevard County on Florida’s mid-east coast. Founded by former slaves after the American Civil War, Melbourne, FL, has a population of 77,000. There’s a doppelganger Melbourne International Airport — and even a Melbourne Arts Festival. The Doors’ Jim Morrison was born there and Sports Illustrated swimsuit edition cover girl Kate Upton grew up there. But this "Melbourne" wasn’t named after William of Lamb; it was named after Cornthwaite John Hector, the town’s first postmaster and storekeeper, who had come from Melbourne-on-the-Yarra.

So, let’s just forget that it was fright-Whig Lamb who opined, whenever faced with change: “Why not leave it alone?”

The opportunity is there. Let Australia’s second-largest, “most liveable” and all-round bewtest city boldly burst post-COVID into its next 186 years with a proud new name.

GJ Burchall is a journalist, scriptwriter and educator who was born and bred in Melbourne.

12 September 2021, 5:00pm It’s a bit sad that our southern city bears the name of a drudge like William ...
Join the conversation
comments powered by Disqus
News updates