Manufacturing a legend: The 1916 Anzac Book

One hundred years ago in May 1916, C.E.W. (Charles) Bean’s The Anzac Book was published to great acclaim. Bean’s vision of the Anzac soldier at Gallipoli has dominated historical memory for nearly 100 years. It is through the championing of a select set of attitudes and values that Bean’s The Anzac Book created the enduring Anzac Legend, writes history editor Dr Glenn Davies.

C.E.W. (Charles) Bean, Australia’s official war correspondent was instrumental in manufacturing the Anzac Legend which was then adopted with gusto by the Australian people.

The Anzac Book is crucial to understanding how Australians conceptualise their ideal national character. In our popular imagination, the answer often encompasses being tough and inventive, loyal to mates beyond the call of duty, a bit undisciplined, chivalrous, gallant, and sardonic.

These values were manufactured through Bean’s 1916 The Anzac Book.

The Gallipoli campaign and the Anzac Legend which emerged from it have had a significant impact on ideas about Australia’s national identity. Although a military defeat, the bravery and sacrifices associated with the eight-month struggle have had a profound effect on how Australians view this period.

For many people, both then and now, the participation of Australian soldiers in the Gallipoli campaign was the symbol of Australia’s coming of age as a nation. 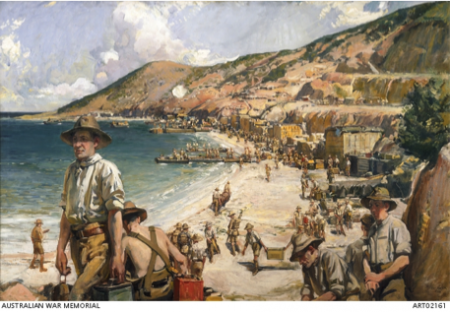 British war correspondent Ellis Ashmead-Bartlett helped to create the Anzac Legend with his newspaper article ‘Australians at Dardanelles: thrilling deeds of heroism’ on the Gallipoli landing published in the Argus, 8 May 1915.

This was the first report on the landing that Australian newspapers published. It found an appreciative and ready audience among those who were concerned about Australian soldiers’ reputation for being “undisciplined” gained while they were training in Egypt, and that Australians might have behaved poorly when faced with their first military engagement. Ashmead-Bartlett became something of a media celebrity and people valued and enjoyed his reports.

A major part of the Anzac Legend’s creation is due to the reporting of the Australians’ deeds by Ellis Ashmead-Bartlett, both from Gallipoli (actually from a ship moored offshore) and in 1916 on a lecture tour of the United States, New Zealand and Australia. Ashmead-Bartlett’s 8 May 1915 article inspired the creation of a framework for interpreting events and experiences on the Gallipoli Peninsula and identifying the characteristics of the “true Australian”. 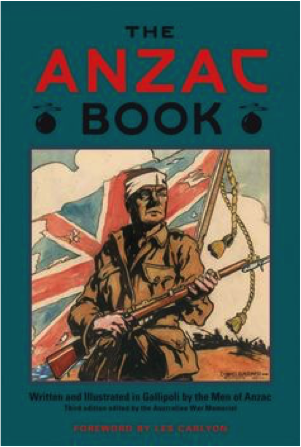 The Gallipoli campaign ended for the Anzacs on 20 December 1915 and was to be marked by the publication of The Anzac Book. The Anzac Book was to have a pivotal role in building the Anzac Legend at Gallipoli. In November 1915, Bean had called for contributions for a Christmas book however, when news came through the Anzac troops would evacuate before Christmas 1915, he realised it had the potential to become the defining record of life at Gallipoli.

The Anzac Book is a collection of articles, stories, jokes and cartoons, as well as satirical and sombre pieces about the conditions of life at Gallipoli written from materials supplied by the soldiers.

It also provides a general outline of the April 25 landing at Anzac Cove and the military advances, offensives and defensives undertaken in the following months until the eventual evacuation of the Allied forces at the end of December 1915.

Few books have ever been produced under such harsh conditions. Created by soldiers under enemy fire and in extreme hardship, the illustrations, stories, cartoons and poems were intended as a Christmas and New Year diversion for soldiers facing a harsh winter in the trenches on Gallipoli.

Practically every word written and every line drawn in The Anzac Book was produced in the lines at Gallipoli between 15 November and the closing date for contributions on 8 December 1915. It was conceived and written and sketched on scraps of paper by men who lived in holes in the ground and who were under fire twenty-four hours a day.

Bean contributed an editor's note in which he outlined the harsh conditions that the book was produced in, the significance it had taken on, and acknowledged the contributors. Sarah Midford describes how Bean was keen to promote the everyday challenges faced by the Anzac soldier.

For Bean, the simple act of completing ordinary day-to-day duties in the face of adversity was an act of heroism worth recording. Poems such as ‘To My Bath’ and ‘Army Biscuits’ related the ongoing filth and drudgery with good humour and light-heartedness. It was the dignity of facing the horror of war with an easy-going nature that Bean was keen to present as heroic.

However, Bean had a tendency to omit anything that had exaggerated sentiment, or anything that dealt with the harsh realities of war without humour. He specifically rejected items that included anything grotesque, discussed the crippling fear of war, deserting soldiers, or included descriptions of extended tedium.

In the 1980s, historian David Kent discovered the file of soldiers’ submissions that Bean had rejected for publication in The Anzac Book. These manuscripts provide ample evidence that faced with the task of creating a commemorative souvenir Bean excluded material which might have detracted from the image he wished to present, even if it reflected accurately an aspect of life at Gallipoli.

Is Anzac's meaning is now only a brand name.Commercialisation and the casualness of going to war https://t.co/iUAimjMPk2 @IndependentAus

When the myth making all started in 1915 Charles Bean, the official military historian carefully burnished the Anzac myth. Soldiers were strong, adaptable, cheerful, laid-back, but faithfully serving the empire.

Not for Bean the harsh realities of war unless they were laced with humour. He didn’t tell us much about the fear, desertion or boredom of soldiers far from home or the horror of it all. He was gilding the lily about the terrible nature of the war in which young Australians were killing and being killed.

By 1916 the pressure was on to get The Anzac Book published very early in the New Year and distributed to Gallipoli veterans and their families resting in England before they were posted on to the Western front. Bean edited the work on the island of Imbros and after the Greek publisher fell through, arranged to have the work published in London by Cassell and Company.

The Anzac Book was released in London in May 1916 and was an immediate success. The entire print run of 55,000 copies was sold out before publication. In September 1916, the publisher recorded 104,432 book sales, of which 53,000 were to the AIF First Division, with the book receiving enthusiastic reviews in London and Australia. 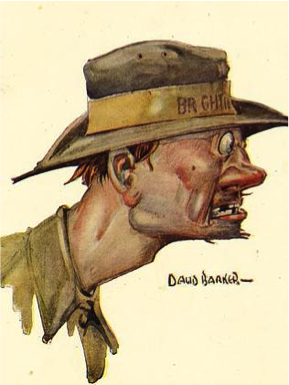 Bean was sure that The Anzac Book would hold a place of significance in the Australian historical record. In anticipation of its importance, he reserved several hundred copies of the book for Australian libraries and museums.

After publication, Bean spent the next three years tirelessly distributing copies to soldiers, officers, civilians and anyone else who could be convinced to buy a copy. Almost half of the copies ordered by the AIF’s First Division were sent home to Australia. This trend continued as more copies were ordered on the front lines in France and Belgium.

Before the end of the war, almost every Australian household would have had access to a copy of The Anzac Book.

The Anzac Book became the finest ‘trench publication’ produced by soldiers during World War 1 and was an instant bestseller when first released in 1916. The Anzac Legend propagated by The Anzac Book is remarkable because it was created, if not overnight, then in a few months in 1916, acquiring its status and popular acceptance because The Anzac Book reached a vast audience.

However, The Anzac Book is not the story of the Gallipoli campaign. It is Bean’s perception of taste and tone and of what constitutes good prose. Bean intended the book to be a diversion, something to amuse the men as they prepared to spend winter in a hellhole. It contains a great deal of gentle humour, whimsy and send-ups, and is based on the Australian custom of making a joke out of adversity and not taking oneself too seriously or those in authority seriously at all.

Australia’s official war correspondent, C.E.W. (Charles) Bean, reinforced Ashmead-Bartlett’s image through his own reports from Gallipoli, his 1916 best seller The Anzac Book (a book of soldiers’ stories, poems and artwork), and ultimately in the twelve volumes of his Official History of Australia in the War of 1914–18. Bean was conscious of doing this and careful to reject any submissions to The Anzac Book that did not fit within this formula. He excluded from The Anzac Book anything unpleasant which could not be treated humorously. In doing so he created an imagined landscape and heroes who inhabited it.

The Anzac Legend has manufactured a popular image of the Australian soldier as brave, resourceful, disrespectful of authority, a bit of a larrikin, a good mate, easy-going, a bad soldier but a good fighter.

However, Bean’s intent was to produce a publication to keep up the morale and spirits of the Anzacs over the 1915 Christmas and 1916 New Year period. The development of a ‘trench publication’ was within his brief. Instead, with the December 1915 retreat, the audience for The Anzac Book exploded from originally the Gallipoli troops only to now England and almost every Australian household and library. In doing this The Anzac Book became the evidence emerging from Gallipoli that the writings of Ashmead-Bartlett were correct.

The omission of any negative actions or attitudes on the part of the Anzacs was massaged by Charles Bean for the rest of his substantial career. Certainly The Anzac Book was not meant to be a definitive and accurate history of the Gallipoli campaign. But it did establish a national attitude that is now a fundamental part of how we see ourselves as a people.

Charles Bean did a decent job on Anzac history but like many historians fell into trap of myth making through storytelling. #qanda

For stories with a fresh angle, subscribe to IA for just $5.