The Australian Government remains committed to deterring “people smugglers” and “turning back the boats” by offering a destination, which will mandatorily detain indefinitely, any person in sub standard and arbitrary conditions.

Our Government speaks of people smugglers and off-shore policies — but, what of the people who find their way to Australian shores? The individuals who find their way into one of Australia’s detention facilities? What happens to them? What is our policy on treatment and human rights generally?

Whilst statistics invariably change from year to year, based on data from the last 5 years, approximately 70% to 90% of asylum seekers are found to be genuine refugees. To make matters worse, these are not criminals — these are people who have fled conflict zones, who are victims, or witnesses of torture and trauma or related threats.

According to various studies, asylum seekers placed in detention are exposed to an increased risk of post traumatic stress disorder (PTSD), depression and mental health related disabilities, with longer detention resulting in more severe mental diagnoses persisting for three years or more after being released from detention.

These are people who might otherwise provide a positive and significant contribution to Australian society but, overwhelmingly, following release from detention are often unable to pursue meaningful employment due to primary injury or exacerbation of psychological or physical injury that detention attracts.

Alarmingly,  according to the governments findings between 2009 and 2011, there were 17,671 reported medical and mental health incidents including 6 deaths, 97 psychiatric hospital admissions, 1,554 acts of voluntary starvation, 127 injuries requiring hospitalisation, 353 self harm attempts and 338 self harm resulting in injury in Australian detention centers.

These figures do not include the more recent occurrences on Manus Island.

There is overwhelming evidence that our Government and our continued support for the policies of mandatory detention may be breeding a culture abusive of human rights.

In saying this, Australia’s mandatory detention system has not yet been consigned to the history books. However, if it were, how would we, as a country and its people, be remembered by the international community for the treatment of our fellow human beings?

It is a question that, to date, in my view, remains unanswered. Granted, there are a plethora of brilliant, tireless and brave Australians employed or volunteering in various capacities who remain committed to preserving human rights in Australia.

What is our government doing to preserve human rights? And what are we showing to the world, our values as a nation?

At present, we maintain policies that are so far removed from world standards – and elect politicians, supposedly representing the view of Australian people – who appear to be completely ignorant of our human rights obligations from an international law perspective.

Even though the Government has announced changes to how it manages asylum seekers, it still remains committed to a mandatory and arbitrary detention system.

Australia, by any account, has one of the toughest stances on deterring people smugglers and preventing individuals from traveling to Australia. Sadly, this comes at the expense of asylum seekers and our standard of Human Rights generally.

To seek refugee protection is not a political issue that is unique by virtue of our geography or political agenda. In fact, the movement of people due to political unrest or war, or even socio-economic reasons, is an occurrence that is prominent throughout the world.

Despite this, Australia is one of the few nations that impose mandatory and indefinite detention on asylum seekers. It is also one of the few nations in the developed world not to have a bill of rights or to enact a national legislative framework allowing for the protection of human rights that provides a direct avenue of redress if a person’s human rights are abused, ignored or breached.

The policy of mandatory detention alone comes dangerously close to impinging on a number of universal human rights, including the right to liberty and security of person.

Australia is not immune to human rights abuses. Cases brought before the Australian Human Rights Commission (AHRC) illustrate the severe psychological and physical effects of detention on asylum seekers. These cases should be an indication that what the Australian government is implementing through its policies is not only unlawful, according to the international law it attests to uphold, but also inhumane by international standards.

At its most basic level, these policies fail not only individuals who deserve our protection, but they fail the image of how Australia is portrayed to the world.

The question now is whether or not we continue to condone – by inaction – this injustice, or whether or not we, as fellow human beings and Australians, encourage and advocate for a universal policy framework dedicated to human rights.

This framework should be committed to a far-reaching scope of human rights and civil liberties that guarantees people at risk are afforded our protection, not only because they are within our borders, but because it is our moral and legal obligation to do so.

Throughout history, human rights atrocities and abuses have been allowed to occur when the world, its governments and its people turn its back on those that most require our attention.

As the Australian Parliament debates the issues, somewhat carelessly, perhaps our MPs – as well as we Australians who elect and support them – should remember the reflections of former American vice-president Hubert Humphrey who, during the American civil rights movement, proclaimed to the world:

Let us not fall on the wrong side of history.

Assess asylum seekers’ claim to refugee status, but assess their applications after accepting them into our society in community detention as fellow human beings.

Give them employment rights, in locations where employment is needed, be it in our rural or urban communities.

Give them rights equal to the standard afforded to all Australians.

Detain them, but only where there exists a reasonably founded or well-documented risk against national security and only for a defined period of time.

Let us not continue to breed a culture of ignorance and human rights abuse. Let us pursue an Australia that is inclusive and let us set the standard for human rights rather then falling below the standard set by others.

Joshua Dale is an associate at Carroll & O’Dea Lawyers and chair of the Australian Lawyers Alliance Human Rights Committee. This week is Refugee Week — find out more here. 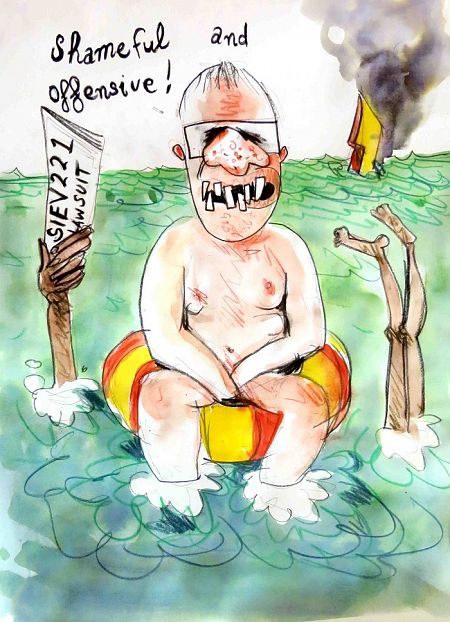 Gender dysphoria: A child’s right to self determination

1 May 2016, 9:00am Joshua Dale discusses a court decision to allow gender reassignment for an inte ...

8 October 2015, 8:10am Is the Commonwealth failing its duty to ensure basic human rights are met in Nauru? ...

7 August 2015, 12:00pm Recognition is growing that a number of feasible claims against the Commonwealth ...
Join the conversation
comments powered by Disqus
News updates