While parts of Britain burn, the country's leading family seems to be in hiding. Barry Everingham wonders if it's denial or plain old indifference. 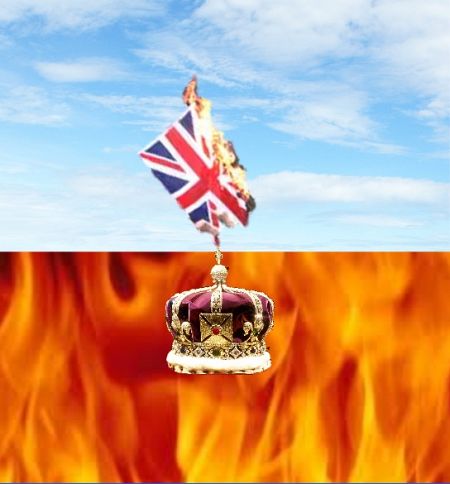 Britain’s leading family is headed by an octogenarian monarch and her nonagenarian consort, so it’s no surprise the couple has been invisible during the current wave of unrest which is plaguing what has become the equivalent of a Third World country.

The nation’s leading politician, however, did return from a Tuscan holiday to rev up anger about the mayhem, caused in the main, but not exclusively, by disaffected and marginalised members of the community, many of whom were bemused by the ranting and raging of this Eton and Oxford educated Establishment prime minister.

His foreign minister, William Hague was overheard commenting on the mayhem with the following: “Ah! The legacy of Margaret Thatcher!” which more or less hit the nail on the head.

Back to the royals.

Its costs one of Europe’s most cash strapped countries a fortune to keep them cocooned  in luxury and privilege and immune  from the woes and tribulations experienced by the vast majority of their subjects on a daily basis.

Of course, those who continue to believe in the divine right of kings would have us believe the monarch herself dips into her not inconsiderable fortune to help prop up this Disneyland system.

One bleat is — no superannuation r pensions for them, not like the politicians vote themselves.

This comparison is so banal it doesn’t warrant a criticism.

The royal family is a collection of mainly well — well-meaning folk who are where they are by an accident of birth and with each succeeding generation the older members fade into well-earned obscurity, while the younger members replace them.

Those extraordinary “accidents of birth” who can trace their descent all the way back from Charlemagne, Egbert of Wessex and even George Washington, and don’t in any accepted sense have jobs and to their credit their influence resides in not being able to exercise it.

Elizabeth’s children (three out of four divorced and remarried) head the list — and of them the Princess Royal (that title in the 21st Century surely says it all) is the hardest working.

Her older brother, the Prince of Wales (another anachronistic handle) is besotted by his wife and before his marriage to her, his long-time mistress. To his credit, Charles doles out incredible amounts of money annually to deserving charities, as well he might. His income is derived from public lands which go with his title. He has never had a real job in his life.

They have two brothers.


Andrew, Duke of York, a piece of work if ever there was one and whose lifestyle and the people he mixes with is under scrutiny, and Edward, Earl of Wessex, of whom the less said the better.

Then come the three leading players on whom the inherited system of leadership rests.

William and Catherine and Harry.

And this is where we came in.

If any members of that dysfunctional, and dare I say, ridiculous, family could bring support and succour to the victims of that Thatcher years it’s that trio.

But, like all the other members of the family, they are not to be seen.