Living in remote Indigenous communities is not a 'lifestyle choice'

Whereas Tony Abbott applauds the closing down of remote Indigenous communities in WA, calling living in them a 'lifestyle choice', Father Chris Riley, founder and CEO of the charity Youth Off The Streets, says it will have a devasating effect in Indigenous Australians and their culture. 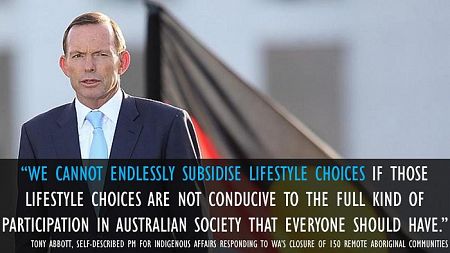 IT CAME A SHOCK to read that the WA Government has recently announced that it will close down 150 Aboriginal communities, after the Federal Government cut funding to essential services.

This is likely to be the fate of many Aboriginal communities across the country as state governments start implementing cuts handed down by the Federal Government.

This lack of empathy towards our Nation’s first people should come as no surprise, as the recently released Close The Gap 2015 report showed little progress toward equality and a fundamental lack of understanding of Aboriginal people. Aboriginal people have a strong connection to country and land, which shapes their identity. When you force the closure of communities, you are not just making them homeless, but you are removing their identity.

Aboriginal people are still the most socially and economically disadvantaged group in Australia and understanding the levels of disadvantage is critical to identifying the needs and addressing the underlying causes. We believe well-being in its totality is the outcome of effectively meeting the historical, cultural, spiritual and social needs of individuals, families and communities.

Youth Off The Streets also recognises and respects the unique history and culture of Aboriginal people in Australia, and their strong and ongoing connections to their traditional lands, cultures, heritage and history. Aboriginal people are recognised as the “Traditional Owners of the Country” and it is important that custodians of Country are represented at Youth Off The Streets' events, official ceremonies and in community protocols. Forcing the closure of 150 communities in WA and possibly more to come in other states is a situation that must be avoided at all costs. This will do severe damage to their identity and health as a people. I ask that Prime Minister Tony Abbott and his Government reverse the budget cuts imposed on Aboriginal programs and services to ensure that Aboriginal people receive the support they desperately need.

If Tony Abbott and his government truly wish to close the gap, then this is the first step they must take.

Find out more about Youth off the Streets and get involved here.

We have many volunteering opportunities available, check out our website for all the details: http://t.co/r1mXO0SNqq http://t.co/vGiOrGXatF

Living in remote Indigenous communities is not a 'lifestyle choice'

11 March 2015, 12:00pm Whereas Tony Abbott applauds the closing down of remote Indigenous communities in ...
Join the conversation
comments powered by Disqus
News updates