Wirajuri elder and activist, Jenny Munro, has been recognised with a giant mural for her four decades on the front lines of Aboriginal activism in urban Sydney, writes Indigenous affairs editor, Natalie Cromb.

IN AUSTRALIA, a country blighted by racism and bigotry, it is a rare occasion I have something positive to say but I can finally say that something well overdue and wonderful has happened.

Wiradjuri elder and activist, Jenny Munro is being recognised for her four decades on the front lines of Aboriginal activism – not by Aboriginal Australia – but the mainstream. Aunty Jenny, as we call her because of the tremendous amount of respect we have for her and all that she has achieved despite the intuitional racism in this country, is watching over Sydney in a much larger than life metaphor for what she has fought for.

Towering over Sydney is a ten-storey mural of Aunty Jenny Munro, which was painted by renowned street artist Matt Adnate as part of the ANZ street art project recognising Sydney people with stories to tell.

Aunty Jenny was selected as a subject due to her tireless advocacy for over 40 years for Aboriginal rights, particularly in Redfern, where her most recent efforts saw the Federal Government intervene in a legal stoush between Aboriginal Housing Company and the Redfern Aboriginal Tent Embassy which was founded by Aunty Jenny to agitate for affordable housing in the redevelopment of the block.

Aunty Jenny’s staunch activism lead to the eleventh hour intervention of the Federal Government which committed funds to the project and ensuring that there is affordable housing for Aboriginal people in the new development of the Block. 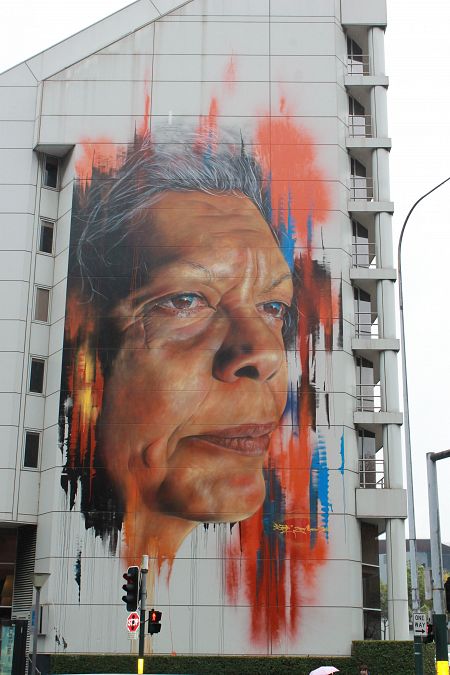 Aunty Jenny said the mural is awesome and a validation from mainstream Australia that people like her should be listened to; that they have things to say; have a right to be here; and our lore and practices and shouldn’t be ignored.

Artist Matt Adnate has spent much of his life among Aboriginal people in communities, both urban and remote, and he says he was in awe of the achievements of Aunty Jenny and really wanted to “capture her spirit” in the mural. He says that he started created mural art to shine a light on the plight of Indigenous Australians and he has also created a portrait of Aboriginal model Samantha Harris for the 2016 Archibald Prize.

If you think that Aunty Jenny was going to rest on her laurels (and to be honest she has a right to with all that she has achieved) you would be wrong because, another tent embassy has been founded and erected in Waterloo by her following the launch of ‘Action for Public Housing,’ to protest plans by the Baird Government to demolish public housing towers and redevelop to include a mixture of private residences and some affordable housing, along with building a metro station.

The Turanga and Matavai tower blocks on Phillip Street in Waterloo and four neighbouring smaller public housing blocks are to be destroyed and the area completely redeveloped to build a new train station on the planned Metro line where the existing public housing estate is located. A number of smaller walk-up public homes are also to go.

The current social housing in Waterloo is home to 2,000 people who are expected to move out in 2017 to make way for the development expected to create some 10,000 residences which will “include some social housing” and will be given the option to move back “over the course of the 20 year development” with the Metro station not being expected to open until 2036.

Aunty Jenny, has brought the fight to Waterloo by erecting a new Embassy sending the clear message that the redevelopment will lead to loss of housing for those who can least afford it. She said:

“The Baird Government ramped up its push and they're not just targeting Aboriginal people in our community, they're just targeting poor people ... so the battle rages on."

Minister for Social Housing Brad Hazzard guaranteed that existing residents of the Waterloo estate would be able to return to their neighbourhood after redevelopment, which is planned over the next 15-20 years. The first relocations are not expected until mid-2017 and he said in a media release:

This is a once in a lifetime opportunity for renewal and it will deliver better outcomes for some of the most vulnerable people in NSW.

I can assure Waterloo tenants that if they want to remain in Waterloo after the development, they can do so.

The new neighbourhood will be one of the mostly densely settled areas of Australia, with up to 70 per cent of new dwellings being private housing.

Premier Mike Baird said they had closely examined the idea of building a new station on the existing airport line but the Metro line station was the better solution. In a media release, he said:

The metro station creates the opportunity to transform Waterloo and make it a better place to live for future and existing residents, many of whom are amongst the most vulnerable people in NSW.

Waterloo Station will help bring new jobs to the area as well as providing a direct public transport link to employment hubs at Barangaroo and Martin Place.

The government is yet to respond to demands for a clear plan for the social housing residents and a commitment for their return, along with a commitment to ensuring adequate equal distribution of social housing in the redevelopment given the increased density levels.

Until then, Aunty Jenny will continue her agitating for the rights of Aboriginal people in urban Sydney and, in fact, throughout the Country.

"We are being pushed from the inner city" Aunty Jenny Munro opens today's protest against the Baird govt pic.twitter.com/w4bPdf0evT

Wirajuri elder, Jenny Munro leads the set up of a Waterloo social Housing Tent Embassy along with community... https://t.co/6ukYfhFJCy

Support independent journalism. Subscribe to IA for just $5 (or less).