Australia is not the land of the fair go, it is a nation where cruelty, ignorance, discrimination and racism are not only common place but rewarded, respected and justified, writes Natalie Cromb.

There has been a lot said recently about racism towards Indigenous AFL player Adam Goodes. But I don't want to speak about the racism against him because, for one thing, I already have – here – and, frankly, despite my admiration for him, I would like to discuss the problem.

Not an "incident", but the pervasive problem of racism and prejudice generally in Australia.

Racism is larger than one moment and one man — it is systemic and malevolent.

The racism that occurs against Indigenous people in Australia, is particularly castigatory. It is offensive, because not only does the system seek to undermine the cultural sovereignty of Indigenous people, but the societal norms – and stemming racism – are based on the denial of historical fact. The details ignored are those of invasion and the pejorative portrayal of Indigenous people as unscrupulous (drunks and welfare dependents) members of a society that is apparently trying to help them help themselves. Add to this, the annual rubbing of salt in the wound by celebrating Australia Day on the day the original inhabitants sovereign land was invaded and a people all but decimated. Nevertheless, Indigenous people need to just "get over it", right?

The insensitivity and lack of education of the wider Australian community continues to grate because, not only are there people that deny history, but there are people who are so blind within their ignorance that they will send these types of messages to the editor of IA in response to my articles: 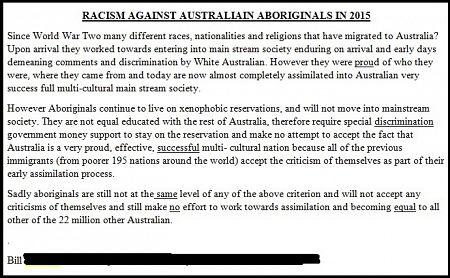 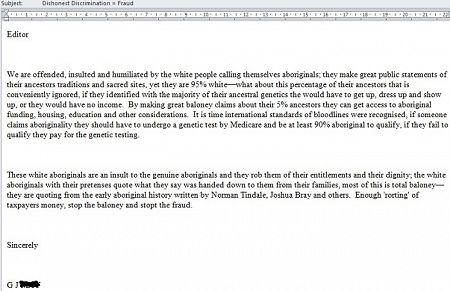 But this is not Indigenous Australia’s fault. It never has been.

The racism I have experienced throughout my life has been both various and odd; I have had to justify my work product as a young child because comments were made about my Aboriginality and that work product must have been completed or contributed to by someone else. I have had "friends" introduce me as "Abo" or belittle and denigrate other Aboriginal people in my presence, before attempting to assuage my obvious disgust by saying I was "one of the good ones". I have had people tell me I was "too sensitive" when I called them on their racism. I have had incidents in nightclubs where I was questioned about my race (because that is what you do when you’re out for fun) and, when I responded with "Aboriginal", a Monty Python skit melded with a Michael Jackson backwards moonwalk unfolded before me, in front of my eyes.

"hot, for an Aboriginal."

When explaining my culture to a new person, I am often met with disbelief, followed by the questions of percentage without any contextual awareness that questioning percentages is one of the most offensive things to say to an Indigenous person. I have had people stare at me – really stare and slant their head, as if deep in thought – and then, after a while, come out and say:

Yes, because my nose is where I hold all of my Aboriginality.

These are just a few of the countless moments and memories all Indigenous Australians experience of racism and they all point to the truth: that racism is ever-present and the most racist people are the ones who deny it the loudest.

A photo of Jeffrey Hepenstall, the man who sent @NovaPeris that vile, racist message. pic.twitter.com/DsrQYZVSGu

I have learnt that, when it comes to racism, there are different categories of people in our society.

There are those that abhor racism, bigotry and misogyny in all its forms and make no exceptions for this behaviour. Let me give you a hint: this category of non-Indigenous Australians is rare — unicorn status rare.

There are those that attest to abhorring racism, but find problems with other minority issues such as religion (“I just don’t want Muslims to take over Australia”) or marriage equality (“I don’t have a problem with gay people, I just don’t want to see it.”).

And there are those that are overt in their hatred of one or many minority groups and make no apologies for their views.

Sadly, the majority of non-Indigenous Australians fall into the latter two examples. think about it, who have we elected?

As an Aboriginal woman who is quite vocal against racism, I encounter many non-Indigenous Australians who attest to their anti-racism views and support for the cause for equality for the Indigenous people of our country, but in the next breath will find a reason to exercise bigotry against another minority group.

They will come out and say their problem with those that are Muslim have nothing to do with race, but will then judge those that belong in the group they are condemning without making the demarcation between the majority of the faith as opposed to the minority of extremists, using a set of standards they would never impose on white people.

We need only look at examples of the Ku Klux Klan, who use the bible to support their hatred of non-whites — but we don't hold all white people accountable for the reprehensible actions of the minority of extremists within Christianity, the way we expect every Muslim person to be an apologist for the extremists within the Islamic faith.

The hypocrisy is glaring, but not to those perpetrating the bigotry as the below examples demonstrate: 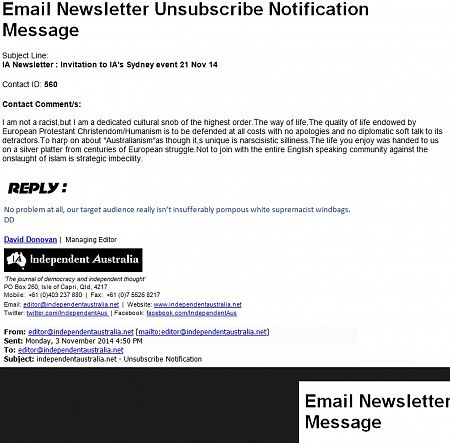 (Note: The telephone number supplied is Independent Australia's own number, so please don't call it.)

Australia hangs its hat on the notion of the "fair go" but this is just marketing — it is not the true state of affairs. If Australia were truly the land of the fair go, Indigenous Australians would not be the villains — they would be the respected sovereign people of this land duly afforded their legal right to self-determination following the enactment of a treaty and be receiving reparatory support to rebuild a culture and institutions of lore illegally decimated.

If Australia were truly the land of the fair go, we would not cruelly personify asylum seekers as opportunists fleeing war, famine and threat of death for a measly $513 (or thereabouts) welfare.

If Australia were truly the land of the fair go, we would not allow religious extremists, such as the current L-NP Government, to infiltrate policy affecting women and LBGTQI Australians, to undermine their rights to equality, whilst also performing from a platform of hate and incitement against another religion while pandering on about terrorism.

If Australia were truly the land of the fair go, we would not be allowing tax cuts to go the wealthiest and allowing public officers to be making fraudulent expense claims while referring to the most vulnerable members of society as drains upon the economy.

Australia is not the land of the fair go, it is a nation where cruelty is not only common place but rewarded, respected and justified. It is a place where humanity comes second to monetary gain. It is a place where racism, bigotry and misogyny are rife without any real condemnation or shame from the majority population.

Down with the corporatists. Subscribe to IA for just $5.