For Tony Abbott: A guide to generosity for the morally bankrupt

The definition of 'generous' per the Oxford English Dictionary:

1 Showing a readiness to give more of something, especially money, than is strictly necessary or expected.

1.1 Showing kindness towards others.

2  (of a thing) larger or more plentiful than is usual or necessary.

On Wednesday (14/6/17), in Question Time, the Honorable Tony Abbott stated that the refugees on Manus Island have

an Oxford alumnus, will appreciate a breakdown of events that have transpired in the Manus Island Refugee Processing Centre being tested against the above Oxford Dictionary definition of the term 'generous'.

“To subject them to these horrific conditions was unnecessary, cruel & unlawful." #ManusIsland refugees compensated: https://t.co/9nsaHnPRdh

So let's do this.

Firstly, let's examine the transfer of men from Australian external territory Christmas Island to Papua New Guinea. This transfer occurred against, their will, and is classified as "human trafficking", under the Australian Criminal Code Act 1995: Division 271, which contains specific offences for trafficking in persons, fulfilling Australia’s obligations under the Protocol to Prevent, Suppress and Punish Trafficking in Persons, Especially Women and Children, supplementing the United Nations Convention Against Transnational Organised Crime.

Division 271 includes provisions for trafficking people into, out of and within Australia. This legislation prevents the forcible transfer of people into or out of Australia, and is punishable by four to seven years imprisonment.

I assume, in Mr Abbott's mind, this falls under the first Oxford Dictionary definition of the term 'generous', since it was something that was given (read: done) to them.

'1  Showing a readiness to give more of something, especially money, than is strictly necessary or expected.'

I think we can all agree that transferring these men to Manus Island was neither necessary nor expected — by either them or the Australian population who have footed the bill for this operation, now exceeding $1.5 billion.

Secondly, let's examine the conditions in which the men are held on Manus.

They are housed in shipping containers, tents, and demountables. The climate there is hot and humid, and disease spreads quickly. Sewage has been documented to be leaking into the pathways. Men share towels, soap, and razors. This has led to multiple outbreaks of gastrointestinal disease, fungal infections, skin infections and conjunctivitis. Largely, the men are only offered panadol and water as treatment, even when suffering broken bones. No dental treatment is available and one young man I know has resorted to smoking toilet paper to try to dull the pain.

The men have to queue for their meals for over an hour and I have yet to see them be fed anything other than chicken, chickpeas, and rice. This has resulted in vitamin and mineral deficiencies as they become visibly sallow, hollow-eyed and overwhelmingly skeletal. For weeks on end, the men towards the end of the queue will be told upon arrival that the food has "run out".

Many advocates who I personally know have sent them protein powders and mineral supplements. These are usually – and for us frustratingly – confiscated by the guards for their personal consumption.

Mr Abbott, celebrated Oxford alumnus, will most certainly agree that this can be characterised under the definition of 'generous' in it's second form:

'2  (of a thing) larger or more plentiful than is usual or necessary.'

I don't think anybody could have anticipated the scale as to which these men would be denied adequate housing, sanitation, medical treatment and nutrition. This is certainly of a larger scale than is deemed usual or necessary, even to punish hardened criminals. 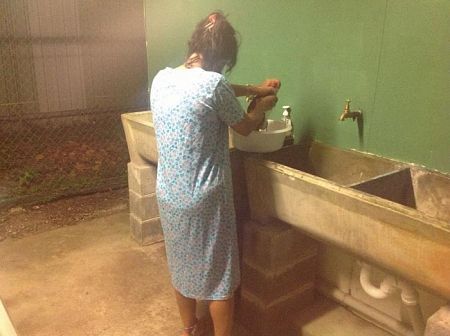 Every person in Australia should read this: 'Open letter to Australia from Manus Island detainees'. http://t.co/miIzRjb8

Thirdly, let's examine the treatment of the men by staff and locals.

One gentleman I know, after a year of agonising untreated intestinal pain, self-harmed out of desperation. As is policy in the Manus RPC, he was thrown into solitary confinement. During a video call to me, I saw him pacing like a caged tiger, bleeding from his wrists, frantic. When he turned the phone's camera toward the window, I saw what the problem was — no less than half a dozen guards were standing outside his cell, laughing, taunting him, yelling at him to just do it, to end it.

Another young man, whom I consider to be my little brother, is a writer and philosopher. During his first year on Manus, G4S guards continually targeted him for being both gay and small in stature. They deliberately smashed his glasses, repeatedly stomped on his hard-drives that contained his writings, his family photos and his university essays. He was unable to write for over a year, until a local charity replaced his glasses with new ones.

It's public knowledge that Manus staff are trained to cut down people who have attempted to hang themselves and carry knives for this specific purpose. One man video-called me to show me, through a mesh-covered vantage point, a body hanging from a tree. The staff took an alarming amount of time to come to his aid and, to this day, I'm unsure what happened to him. It's hard to keep track of the men and their well-being — they are scattered between the RPC, the Lorengau Transit Centre, the local hospital and the hospital in Port Moresby. I have personal concerns for the safety of several men who seem to be "missing" for more than a year and nobody can provide answers as to their whereabouts.

On one memorable occasion, about 12 months ago, gastrointestinal infection swept through the camp, affecting over 100 men. This was a particular issue for those in Oscar compound, who at that time weren't allowed to keep water bottles in their room and were unable to raise the strength to go to the mess hall to rehydrate themselves. Then, all the toilet paper "disappeared". For one week, these men, vomiting, with diarrhoea, had no access to toilet paper of any kind. Since then, the toilet paper has regularly disappeared — sometimes for two weeks at a time.

The beatings from the locals and police, the death of Reza Berati who was repeatedly struck in the head by up to 15 personnel (yet, only one has been charged), are all well-documented, as is the systematic and deliberate mistreatment of the men, as seen in The Guardian, complete with evidence.

Please tell me, does that fall under the definition of 'generous' in it's first or second form? I'm a little lost here, Tony. Help me out.

Finally, on a personal note.

There is a little boy living in Sydney, with his beautiful and brave mother  and sweet, intelligent sisters.

He is eight years old, a talented artist, loving, bright and engaging, and lights up every room he walks into.

He arrived on the same boat as his parents and siblings, stateless and fleeing genocide, but he hasn't seen his father in four years.

His "Papi" is on Manus with a heart condition that has been left untreated for four years, resulting in the rotting of his extremities.

This amazing child, along with his mother and sisters, has been told that he'll never see his father again.

As a result, he has been in a downhill spiral for nearly two years now. Without his father, this family cannot see a future for him, or for themselves. They are all suffering from crippling depression, with indefinite conclusion.

All the love in the world cannot replace what has been taken from them, by force.

Mr Abbott, I cannot find a place for this within the definition of 'generous', or even your assertion of "taking advantage of".

But I can find it here, in the Oxford Dictionary, in all three senses of the term:

1  The action or practice of inflicting severe pain on someone as a punishment or to force them to do or say something, or for the pleasure of the person inflicting the pain.

What's happening on Manus Island and Nauru is torture, and this government is responsible. pic.twitter.com/lpRwrn9wE0

Manus Island refugee: These people have many tools of torture & one of the tools is to take away our hope" https://t.co/6FXFwRNFzH via @smh