DFAT: Governor General is not Australia's head of state

David Glynne Jones has correspondence from DFAT showing that the Governor General is definitely not our head of state. Troublingly, it also reveals that she seems to have no formal diplomatic status at all.

ON THE INTERNET the DFAT protocols on who is Australian head of state are clear:

This was thrown into a small amount of doubt on March/April 2009, when the Governor-General Quentin Bryce undertook an official tour of six African states, because the then PM Kevin Rudd made public statements to the effect that the GG was undertaking this tour in her capacity as "Australia's head of state". 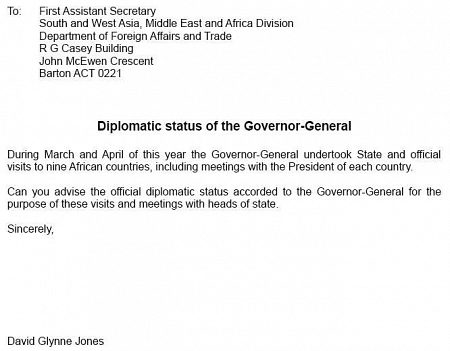 In November 2009 I wrote to the relevant division of DFAT requesting advice on the GG's formal diplomatic status for the purposes of the tour. Note this letter opposite.

I finally received a response in late March 2010 (PDF copy attached).  Whatever the GG's diplomatic status was for the tour, it certainly wasn't that of 'head of state'.

The official DFAT position is:


"The Governor-General's official status when travelling is regulated by the Convention on the Prevention and Punishment of Crimes against Internationally Protected Persons, including Diplomatic Agents (1973).  The Convention does not confer diplomatic privileges and immunities but is concerned with the protection of the person." 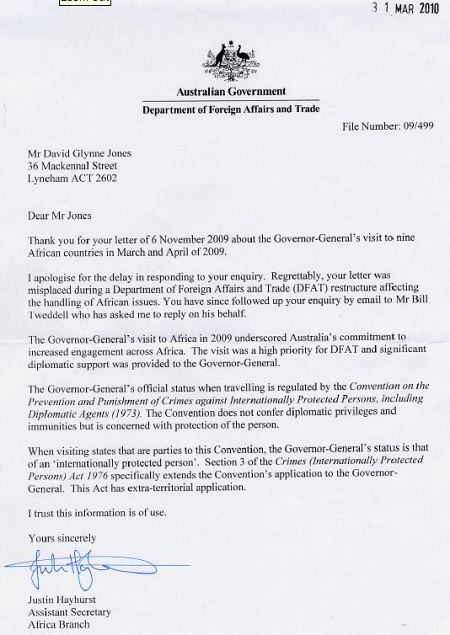 Several issues emerge from this response:

2. It would appear that her tour may have operated diplomatically under 'courtesy' arrangements, in which the states she was visiting agreed to overlook the fact the the GG has no formal diplomatic status outside Australian borders.

3. This problem occurred previously when Bill Hayden was GG and visited the United Nations - apparently there was a mad scramble to arrange very junior (3rd rank) diplomatic status for him so that he could attend sessions in some official capacity

All of this gives the lie to two anti-republican propositions:

1. "The GG is the de-facto Australian Head of State" - clearly not true, and must be publicly rebutted.

2. "It's not broken, and we don't need to fix it" - any self-respecting and mature independent nation should have a head of state who is both a citizen and can enjoy the full diplomatic status of 'head of state' when travelling officially outside national borders and representing the nation's interests - clearly this is not possible for Australia under the current constitutional arrangements, which are therefore clearly 'broken'.
REPUBLIC David Glynne Jones DFAT Governor General head of state debate who is Australian head of state
Recent articles by admin

DFAT: Governor General is not Australia's head of state