Although the Sydney Opera House, one of the greatest buildings of the twentieth century, was opened by Queen Elizabeth II in 1973, in the eyes of its creator, the Danish architect Joern Utzon it was the very essence of the spirit of a republican Australia, resounding with the spirit of place, and of the very country in which we live, writes Glenn A. Davies.

UTZON was asked in 1998 to comment on the idea of the world-heritage nomination of the Sydney Opera House. “Please listen to me, Canberra. They should accept that an Australian building will be cared for, representing a time which is at the end of colony Australia and the beginning of republic Australia. The spirit of the building is independent of anything from anywhere. It could be the best example of what you’re going to do, because you’re to do that, to be a republic – with all respect for the royals! So I think these ideas fit beautifully together. Then you can hear beautiful music all the time in the future from a clean beautifully kept building.” In November 2008, Utzon died in Copenhagen at the age of 90. During the NSW State Memorial Service in March 2009, John Bell, of The Bell Shakespeare Company, read a tribute to Utzon called An Angel at Bennelong Point written for the occasion by David Malouf: "If, as humans, we had to name our supreme achievement in the realm of making, it would surely be that piecemeal work of hands and generations, the city. "Extraordinary, then, how often in such a collaborative enterprise, such a random collision of expediency and provisional hit-and-miss, of utilitarian dullness and commercialism and occasional caprice, a single building, the product of one man's vision, has made all the difference, providing a city almost overnight with what it lacked, a defining centre, or adding to an existing landmark a late-born twin and rival to create a new line of force. "Think of the Taj Mahal or the Golden Gate Bridge. Think of Notre Dame and the Eiffel Tower. "If such a building catches the world's eye and finds a place there it becomes an icon, or what Wallace Stevens, speaking of poetry, called a "necessary angel": a presence that speaks powerfully to the senses but whose real message is for the spirit. 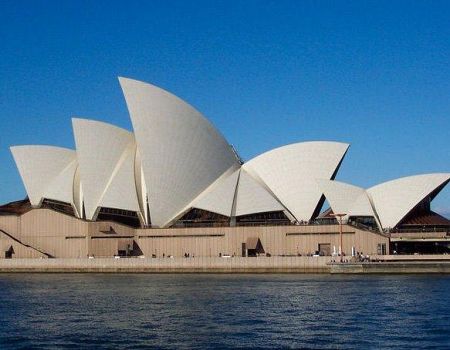 "Set such a building down in the muddle of a great city and the whole field composes itself anew. The city is drawn in around it, as if it had been waiting for just this miraculous object to appear and claim its place. "That, of course, is how it was when this building, Joern Utzon's Opera House, first arrived at Bennelong Point. "And those of us who lived through the 15 years of its construction - the piling up over weeks and months in all weather of so many tonnes of structural material, the assembling of so many hands, the precise calculations and engineering and technical know-how, the bringing in of excavators, derricks, cranes, lifts, girders to a site that swarmed like the pyramids, all mess and mud piles and unfinished arcs and unseemly arguments - will recall, when all the heavy work was done and those millions of tonnes had found their proper place and tension, and the finished object was cleaned down and unwrapped, what a work of playful lightness it turned out to be, a shining thing from another order of reality that had miraculously stepped clear of the mind that had conceived it, shouldered off its crust, and was actually there, spreading its wings on a new shore "But a city is a living organism, an enterprise not simply of towerblocks and thoroughfares and squares, but of daily comings and goings, of human needs to be catered for and interests served. Those too are transformed by whatever new thing is set in their midst. "When Utzon's necessary angel alighted at Bennelong Point, the whole inner city shifted its ground. Circular Quay, The Rocks, Woolloomooloo and Walsh Bay took on a new existence. Macquarie Street found a goal, became what it was always meant to be, a grand boulevard running from Hyde Park to the water. And the lightness, the exuberant fantasy the building embodies and so powerfully spoke up for, provided a new vision of what a water city - and specifically this city, all light and vertical space and air - might aspire to be: a playground of the spirit, a model of how the useful and necessary may also, within the rules, become pure play. "Like all true works of art, Utzon's great house and explosive sculptural ensemble was a gift. Our role as the receivers of it is to honour the gift with our affectionate gratitude, and be taking it into our lives and using it as it was designed to be used, and passing it on." The sun had just slipped over the horizon to kiss the Opera House sails when the people of Sydney gave thanks to Joern Utzon, who had given them the sail. A sail created to catch the wind of the new republic.