Australian racism is alive and flourishing

The reaction to the Tent Embassy incident shows that Australian racism and intolerance is alive and well; managing editor David Donovan says it’s time for Australians to grow up. “The only thing necessary for evil to flourish is for good men to do nothing.”

Before I started Independent Australia in June 2010, I didn’t really believe Australians were a particularly racist bunch.

How naïve I was.

Since then, I have learnt differently, after finding myself on the receiving end of a gargantuan pile of racist emails, faxes, and even text and voicemail messages.

And the comments and statements I have seen after news stories on the Tent Embassy incident on Australia Day this year have left me embarrassed, saddened and even a little depressed.

It seems to me that the Australian people and the Australian media were lying in wait for a chance to leap in and attack Indigenous people — to express their underlying indignation about Aboriginals' concerns and their latent hatred for this dispossessed minority. All because of some mild protests at which politicians and police over-reacted in a frantic and heavy-handed fashion. No-one ever died from the vibrations of a window pane being banged upon. And so they burnt a single flag of their colonisers. So what? Worse things have happened to them. Think of Tasmania. Think of the dispossession of a continent without even receiving the dignity of a Treaty.

There was no attack on Julia Gillard or Tony Abbott. But there has been an outrageous and frenetic attack on Indigenous people since Australia Day.

But, even more depressing, it isn’t just Indigenous people Australians appear to hate. It is also people from outside Australia, such as people who look different to us, speak different languages, or have different cultures or faiths. And this is seen through the hand-wringing public concern about refugees arriving by boat — as if this miniscule proportion of our overall immigration intake constitutes an "invasion". It is completely apparent to me that our concern over refugees is far less about the numbers; or the unsafe boats; or the evil, heinous, people smugglers; and rather more about the sorts of people arriving on boats. Nice people don’t come by boat, you see — they fly in on Qantas, silly.

It is a sad and unpleasant part of human nature to fear those who do not look like us, or who wear different clothes; people who eat strange foods and don’t worship in the same way we do. In Australia, there is a fear that people from non-European backgrounds will come to this land and change our country – in some indefinable way – for the worse.

I don’t fear the few refugees we have in this country. I fear more – much more – the yobbish thugs who were born here and get Southern Cross tattoos and wrap themselves in flags and get drunk and maybe beat up some Middle-Eastern immigrants for no particular reason at, say, Cronulla.

Immigrants have always come to this country and most have changed it for the better. Have we forgotten how our colonial history began? How our first settlers sailed out here in chains in stinking prison ships, or as penniless settlers — the persecuted, downtrodden, undervalued, despised, refuse of British society. But people who used the opportunity to start again. To embrace the chance they had unexpectedly been given. Shouldn’t we support immigrants fleeing persecution in far-off lands, not begin persecuting them anew? We are now, arguably, the richest nation in the world. Are we so selfish and mean-spirited that we don't want let a few others share in our good fortune? Let’s not forget that, apart from our small downtrodden Indigenous population, we are all relatively recent immigrants to this land. Give immigrants a chance. I know many and they are good people.

Personally, nothing gives me greater pride than hearing people of non-European appearance speaking in broad Australian accents about going to the cricket, or footy, or having a barbie and a few beers on the weekend. Is the problem that we are afraid our culture is so weak and feeble it will be subsumed by other, more dominant, cultures? Why are we such a frightened people? Why are we so unsure and afraid of outsiders and those who seem a little different from us?

We need to grow up and develop true self-confidence in our national identity and character — and not the shallow jingoistic parody of it we see on such events as Australia Day. This country would be much the worse were it not for our immigrant population. And, moreover, we much accept, reconcile and embrace our Indigenous people and their culture in a true and meaningful way. It is, after all, our Indigenous culture and people that makes this nation truly unique.

To illustrate the depth of our intolerance, I received the following email a while back from someone who really should have known better; someone whom I had thought of previously as holding fairly sensible and moderate views. I only include the text — see if you can spot the obvious errors. By the way, the little squares or question marks denote a flag or kangaroo motif.

Our Country – YOU Have the right – the right to leave !

After Sydney not wanting to offend other cultures by-- putting up Xmaslights.

After hearing that the State of South Australia changed-- its opinion and let a Muslim woman have her picture on-- her driver’s license with her face-- covered.

Quote:nor do I hold a-- grudge-- against anyone who is seeking a better life by coming to-- Australia.

However, there are a few things that those who have recently-- come to our-- country, and apparently some born here,-- need to understand.

This idea of Australia being a multicultural community has-- served only to dilute our sovereignty and our national identity.-- As Australians, we have our own culture, our own society, our-- own language and-- our own lifestyle.

This culture has been developed over two centuries of struggles, trials and victories by millions of men and women who have-- sought freedom.

We-- speak ENGLISH, not Spanish, Lebanese, Arabic, Chinese,-- Japanese, Russian, or any other language.-- Therefore, if you wish to become part of-- our-- society,-- Learn the language!

“In God We Trust” is our National Motto. This is not some-- Christian, right wing, political slogan. We adopted this-- motto because Christian men and women, on Christian principles,-- founded this nation,-- and this is clearly documented.-- It is certainly appropriate to display it-- on the walls of our-- schools. If God offends you, then I suggest you consider another-- part of the world as your new home,-- Because God is part of our culture.

If the Southern Cross offends you, or you don’t like-- “A Fair-- Go”, then you should seriously consider a move-- to another part of-- this planet.

We are happy with our culture and have no desire to change,-- And we really don’t care how you did things where you came from.

This is OUR COUNTRY, OUR LAND, and OUR LIFESTYLE,-- and we will allow you every opportunity to enjoy all this.

But once you are done complaining, whining, and griping about Our Flag, Our Pledge, Our-- National Motto, or Our Way of Life,-- I highly encourage you take advantage of one other great-- Australian freedom,

“THE RIGHT TO LEAVE”.

If you aren’t happy here then LEAVE-- We didn’t force you-- to come here.-- You asked to be here.-- So accept the country YOU accepted. Pretty easy really, when you think about it.

I figure if we all keep passing this to our friends (and enemies)-- it will-- also, sooner or later get back to the complainers, lets all try, please.

No matter how many times you receive it…-- please forward it to all you know. 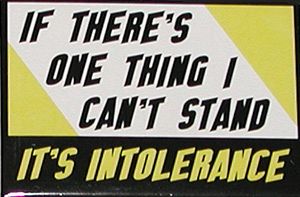 This was my reply:

“In God we Trust” is not Australia’s motto and never has been…it’s the United States of America’s.

Australia doesn’t have a national motto. If it did, maybe it would be, “give everyone a fair go”.

We also don’t have a pledge. That is also the good ol’ US of A.

If you want to read more about this ignorant, hateful, xenophobic load of bollocks, which has been doing the rounds since 2005, and did indeed originate in America (so much for the Aussie patriotism) click on the link below: