DNA evidence shows that Australia's Original people have been here 400,000 years or longer making them one of the oldest races in the world. Binnah Pownall says its time we had a closer look at our ancient relatives.

TONY ABBOTT has shown just how purely ignorant some Australians can be of the (ab)Original culture in what is now called Australia.

If we have just relied on the text books and mainstream history and education to learn of “the ab-Origines” we can be excused for knowing very little, as the information just isn’t out there to find.

As far as our government is concerned, the official line was: that the Originies were from another age, and were slowly dying out and that there was absolutely nothing to learn from them.

Nothing could be further from the truth.

The same geneticists, (namely Rebecca L Cann and Allan C Wilson), who did the DNA studies in Africa that was supposed to decide that that is where we all came from, came to

Australia and did DNA tests on full-blood Originie people here. The results showed strong mitochondrial DNA evidence from the female line that the Australian Original people have been here for at least 400,000 years if not longer. (see: www.forgottenorigin.com) This gives them somewhat of a head-start to the other races, that have been proved to come along much later.

Perhaps it is time – as Tony Abbott has just inadvertently pointed out – that we all had a closer look at our ancient relatives, just in case some city slickers still don’t get it.

Australian Original Culture – despite all the distractions of the last 230 odd years is still a living “religion”. In fact, the Original peoples’ way of life is beyond religion. It's more something that is lived in your dreaming, as well as waking life.

There is a lot less separation in their lives, and it certainly isn’t a lifestyle choice.

The Original people are extremely sensitive to the energies contained in the spirit of the land, and as in any advanced civilisation, all life was always considered sacrosanct. Part of “being” in nature was “being” a part of the land — and this is achieved by understanding and living in the deeper acceptance of the fact that the land was the source and support for all life and ultimately…one's own.

The vibration of creation is everywhere, and dimensionally multi-layered. With this constantly in mind, the act of everyday living becomes a sacred conscious act. The laws of Nature are pretty easy to understand: since the land is responsible for life, one's life is responsible for the land. This demands that a person lives and behaves in a manner of constant conscious homage and reverence to all  “beings” and creatures that are around, and in one’s immediate environment.

From the way we in the western materialist world have grown up to see things, our view is relatively shallow and cerebral, and not felt by the full body. Even our science has proven that there are neurons or “thinking cells” in other parts of our body —besides the brain. We are now waking up to a “wider way of being”. The Original People have never ceased being in this consciousness. It is in their blood to this day. 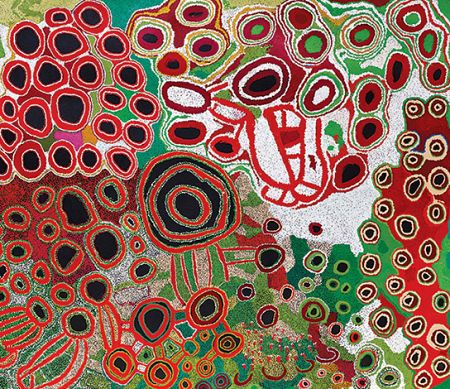 All the original families around Australia took on sovereign responsibility for their ancestral tribal lands — to ensure life was perpetuated forever. Such was their profound custodial connection to their ancestral land. It was certainly never exploited. Too much respect was involved.

That power felt in the land was gained by the families’ connection to past relatives and ancestors, buried in the land they walked upon. That is a hard concept for we new-Australian boat people to comprehend. Most of our line of relatives are buried on another continent. We need to remember that we have been moved and de-tribalised off our ancestral lands, or were moved on because of war and conquest many thousands of years before the colonialist forefathers came here and upset the intricate balance on this continent.

There seems to be so much that majority of Australians don't know they don't know about the people who have habited this land from the beginning. Because we live on what is essentially deemed to be stolen land, many things that enable and honour the original culture have been purposely kept from us.

If our Prime Minister doesn’t know of the Ancient connection to country of the Originies, it is up to us to educate ourselves and each other of the truth. Right now, the oldest living culture needs all the help they can get from non-Original Australia to stand up and assist them in defending their inalienable sovereign rights.

26 June 2015, 5:30pm DNA evidence shows that Australia's Original people have been here 400,000 years or ...
Join the conversation
comments powered by Disqus
Daily news
Get FREE daily updates from IA to your inbox.
Just in
SHOP AT IA