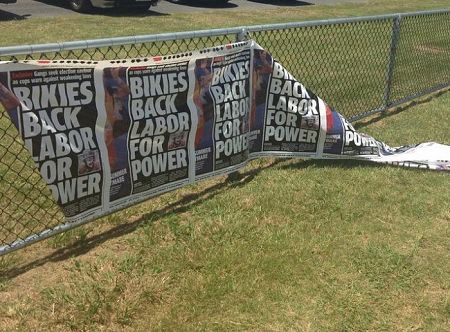 The LNP's dirty smear campaign all seemed to be falling down this afternoon at Miami High on the Gold Coast (Image: DG Donovan)

It's the day of the Queensland election and voting is under way and controversy swirls as Campbell Newman and the LNP desperately try to cling to power.

All over the State reports have come of slanderous LNP signage plastered around booths in bulk, all malciciously linking the ALP with bikies — facsimiles of Rupert Murdoch's scandalous Courier-Mail front page from 5 January this year. The Courier-Mail has, as many have observed, been a partisan player, especially on its front pages, barracking unrestrainedly for the LNP.

From the IA newsletter sent out this morning, which outlined the situation and provided some background:

...revolting is election day here in Queensland, especially with the LNP swamping polling booths with that mendacious Courier-Mail front page that Premier Newman got such a big laugh from yesterday.

Here's a picture this morning from a polling booth in scandal ambroiled LNP MP Ros Bates' seat at Mudgeeraba, showing Murdoch's malicious propaganda posters as far as the eye can see: 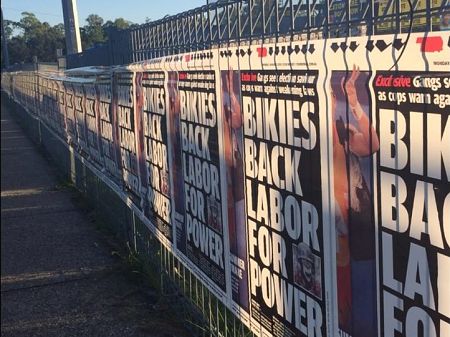 The LNP tried a similar tactic at the Stafford by-election, causing a complaint to the Electoral Commission and leading to the posters then having to be covered up and/or removed. It will be interesting to see what happens today.

It would also be interesting to know exactly what arrangement the Murdoch press and Newman have about these posters ... reproducing this page would have required permission and perhaps some sort of consideration. Hmmm...

Beyond the LNP's corruption scandals and the chicken dances, this sounds like yet another good reason to put the LNP – and its big media affiliate – dead last.

Around IA's Surfers Paradise base in the central part of the Gold Coast, we can confirm the posters were very widespread, with only the Broadbeach State School booth being without them:

It is clear from approvals printed on them that the bunting was approved by the LNP:

It also seems apparent the ALP administration, unlike at Stafford, were either unable to get the posters removed or didn't bother trying. They may have thought the turnoff factor from the public to this grubby tactic might even be worth some votes.

In the half dozen booths I visited, complaints had been made by scandalised ALP candidates and booth workers to the returning officers in each location, however most complaints, it seems, were summarily dismissed, with the signage being allowed to remain up.

Luke from Labor at Miami High School: not happy at the LNP's "dirty tactics". pic.twitter.com/1np8fU5OoF

I doubt we have heard the last about this grubby attempt to subvert democracy, nor the too close links between the Murdoch Press and the LNP. One can only hope it resoundingly backfires on them both — losing them votes, credibility, customers and circulation.

Then came news the LNP were trying to stop activist group GetUp! handing out How to Vote cards outside polling booths advising voters to put the LNP last.

Alex and Bec are getting it done at Hilder Road State School in Brisbane #SaveTheReef #qldvotes pic.twitter.com/VeOKJ4kL3Z

From an email received by IA from GetUp! just after midday:

We need your urgent help.

Voting has just opened in Queensland, and Campbell Newman's LNP's lawyers have applied for a Supreme Court injunction to stop us handing out our how-to-vote cards.

Right now, hundreds of GetUp volunteers are handing out cards telling people to put the LNP last, but if we lose this Supreme Court action we'll have to stop.

We need to fight it, and we have to do it fast. We can only do it if we know we have enough money to fight the injunction in an urgent court action, and fight any appeal that may arise.

The email went on — but no need for more details as the Supreme Court turfed the LNP's vexatious and anti-democratic application soon thereafter.

Judge rules 'no serious question to be tried'. Now back on with democracy.. #qldvotes

Clearly the LNP will stop to almost nothing to retain power. One can only imagine that there must be big money riding on the LNP regaining power and the division of spoils thereafter, especially via asset sales and mining approvals.

With only a couple of hours yet before the polls close and counting begins, there is cautious, tense optimism amongst progressives to whom IA spoke to today around polling booths. None were confident of a victory, yet neither were any prepared to rule out the LNP falling. Most said, even here in conservative heartland, that there was a positive mood towards them from the public to whom they encountered.

Like a battered spouse, today's dirty tricks by the LNP may just have been one too many for Queensland's angry and abused electorate, who have clearly been waiting with "baseball bats" for some time to make their displeasure felt.

Me and my main man, Shakin' Ray the Mermaid Mute - at Broadbeach School pic.twitter.com/A1yWEa95LR

People should do this to EVERY corflute they can. pic.twitter.com/AkmGmNchSA