Invading our smugness: Thoughts on a diversity toolkit

The Murdoch press are outraged a university is teaching that Australia was invaded — but when over 100,000 of the First People were slaughtered by colonialists, then what else would you call it? Dr David Stephens reports.

WEDNESDAY, 30 MARCH, must have been a slow news day at the Daily Telegraph. It is difficult to find any other reasonable explanation for the fuss the Telegraph made about the "Diversity toolkit" it discovered on the website of the University of New South Wales. What followed, however, spoke volumes about how careless some in the mainstream media have become about evidence and, more importantly, how easy it is for "hot button" issues to provoke massively disproportionate reactions.

Despite the Telegraph’s fulminations that students were being directed to say Australia was "invaded" rather than "settled", and to accept various concepts that the Telegraph blamed on "nutty professors", the toolkit was a fairly mild document. A statement from UNSW insisted the toolkit contained nothing mandatory, merely lists of "more appropriate" and "less appropriate" terminology relevant to settler-Indigenous history in Australia.

The university rejects any notion that a resource for teachers on Indigenous terminology dictates the use of language or that it is designed to be politically correct … The guide does not mandate what language can be used.

Even Wiradjuri journalist Stan Grant (Guardian Australia) fell for the idea that UNSW was trying to suppress free speech. Those who delved a little deeper found the UNSW guidelines had been obtained under licence from Flinders University, Adelaide, that there were similar guidelines in place at the Australian National University, Monash University, the Queensland University of Technology, the University of Melbourne and other institutions, and that the UNSW Indigenous guidelines were based on material that has been used in New South Wales schools since – wait for it – 1996.

Secondly, on the reaction.

Paul Daley (Guardian Australia) argued that "invasion" was the correct word to use.

Australia's leading journalist on ATSI affairs @PPDaley on the facts of the arrival & the politics of the arriviste https://t.co/oEvdUN76MF

He attracted more than 2,600 comments in two days, both strongly supportive and strongly resentful, and an unusual number "deleted by Moderator". Shock jocks Hadley, Jones and Sandilands frothed, although morning television was fairly laid-back. (The Telegraph’s original outrage had found willing support from Keith Windschuttle and the Institute of Public Affairs.) In non-MSM media, Alex McKinnon in Junkee kept a level head. Up in Queensland, Premier Palaszczuk supported QUT’s similar guidelines. Among the exercised, there was some confusion about whether Cook or Phillip was the invasion leader.

As usually happens, the best analysis arrived a couple of days after the initial explosion.

[W]hy is this hysterical response so entirely predictable? [asked Waleed Aly in Fairfax] Why is it that the moment the language of invasion appears, we seem so instinctively threatened by it? This isn't the response of sober historical disagreement. It's more visceral than that. Elemental even. It's like any remotely honest appraisal of our history – even one contained in an obscure university guide – has the power to trigger some kind of existential meltdown. What strange insecurity is this?

Archaeology professor Bryce Barker in The Conversation also provoked trenchant comments pro and con. He made an important connection.

It is telling that [Kyle] Sandilands suggested people “get over it – it’s 200 years ago” when we so revere the notion of Lest We Forget when remembering our role in a foreign war (WWI) 100 years ago … [W]ho we, as Australians, choose to remember and what events we commemorate are inherently entwined with how we view ourselves and how we want the world to see us as a nation … Is not a Walpiri man’s death defending his way of life [at Coniston, NT, in 1928, when 31 men, women and children were killed by police] just as worthy of remembrance as a World War I digger’s ten years earlier?

Why are we as a nation so reluctant to face up to this part of our past? Inconvenient truths that risk tainting the white “pioneer/settler” narrative are, it seems, not to be commemorated but forgotten.

What we remember matters – including that Australia was “invaded”. https://t.co/E1ZnTgrTAe pic.twitter.com/uNdl2uMDOf

You could write a history of Australia around two invasions: Australia from 1788; Gallipoli 1915. You would need to explain, though, why one invasion has attained cult status while the other, for many of us, is euphemised out of mind. Smugness reigns.

"Invasion" or not? Semantics can lead us up a dry gulch. Not all invasions look like D-Day, the War of the Worlds or the Gallipoli ‘landing’ but none of them end when the last soldier splashes ashore. An invasion, at its simplest, is entering and remaining in a place where you are not welcome.

If the initial reaction of the Eora to Phillip was more one of puzzlement than hostility this did not remain so for long. The invasion went on to take various forms, from loss of land to poisoning to massacre. Indigenous resistance commenced within months of the First Fleet and persisted, led by warriors like Pemulwuy, Windradyne, Jandamarra and unnamed others.

According to recent research by Evans and Ørsted-Jensen the invasion of Australia led to more than 65,000 Indigenous deaths (men, women and children) in Queensland alone, and perhaps 100,000 across Australia. That’s many more Australian deaths than in World War I and about as many deaths as in all our overseas wars.

You cannot “get over” a colonial past that is still being implemented today [responded Indigenous writer Luke Pearson in Guardian Australia]. You cannot come to terms with a national history that the nation refuses to acknowledge ever happened. We cannot “reconcile” what happened yesterday when we are too busy bracing ourselves for what will inevitably come tomorrow. 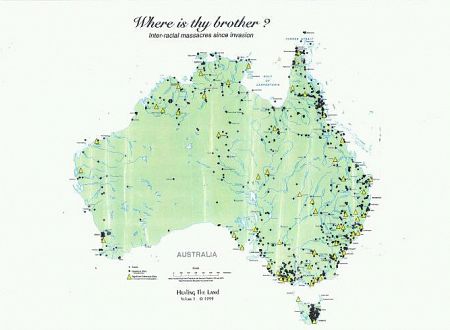 That initial "wound in the soul" has been reopened many times and still festers beneath Indigenous family violence, incarceration and mental and physical illness. The strand of our history that traces from 26 January 1788 has left a mark that many of us cannot fail to see and feel but that many more of us refuse to recognise.

Dr David Stephens is secretary of the Honest History coalition and editor of its website (honesthistory.net.au). The views in this article are not necessarily those of all supporters of Honest History. You can follow Dr Stephens on Twitter @honesthistory1.

Don't tell me to 'get over' a colonial past that is still being implemented today | Luke Pearson https://t.co/LN06CZrFvj What he said

How are we even debating in 2016 if Australia was invaded.

Does this look like the actions of settlers? pic.twitter.com/Jdws8c4KYp

Australia was invaded by Britain in 1788.

Any other way of describing it is historically inaccurate.#Invasion pic.twitter.com/9gspPSqSQ3