Life, the universe and State of Origin

Bazza and Mick recount the 2022 State of Origin series, but Bazza's mind is focused on the grander scheme of things.

“Well, well, well, Bazza. How about the Maroons, eh? I’m glad I back them these days. I figure because my grandmother was born in Brisbane, I qualify as a Queensland supporter.”

Bazza continued peering into his newspaper, pausing for a sip and shaking his head.

“Good on you, Mick. Have you seen these images from the James Webb Telescope of our cosmos released this week?”

“You’re a typical Blues supporter, Bazza — trying to change the subject. Staying away from the back pages of the newspaper, eh? I’m onto you. Now, let’s start with the opening of the game and the big hits.”

Mick began his recount of the game in an animated fashion, pausing only for sips to fuel his excitement.

We can now see deeper into space than ever before. Thanks to decades of engineering and scientific innovation, these James Webb Space Telescope images represent an exciting new chapter in the exploration of our universe. I am so excited for what's to come from the @NASAWebb team! pic.twitter.com/xtkhksm1ry

Bazza’s thoughts returned to the images of space in the newspaper. He shook his head at the realisation the images were a mere speck in the universe, many times less than a grain of sand on a beach that never ends. Striking as the kaleidoscope of images was, he wondered what was beyond those and beyond that and so on.

When everything else seemed to be defined by beginnings and ends, the idea of space just going on and on rattled him. It was beyond imagination because even imagination was somewhat defined.

Bazza shook his head at the thought and took a sip.

“Now, Bazza, no point shaking your head. You blokes were up 12 to ten at halftime — your shout, by the way.”

Bazza returned with full schooners and Mick’s narration of the State of Origin match took on the form of a 1980s Rex Mossop commentary, with references to “a bit of biffo” and “claret flowing” to the bemusement of a wider audience in the bar.

The term “held him in the Christmas hold” had the younger patrons scratching their heads but Mick was now playing it up to the pub patrons, with an outstretched palm for a fend and a sway on his bar stool for a side step.

Bazza’s thoughts again strayed. He picked up the beer coaster and tore it in half, then in half again and again until his fingers could no longer tear it further. 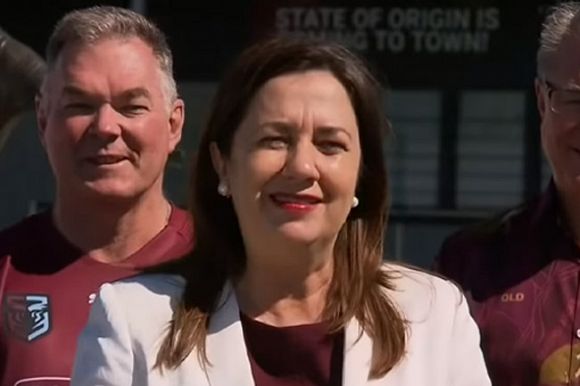 Dodging the world disease in Australia almost proved too much for sports industries trying to keep up elite entertainment for thousands of spectators.

“I can see you’re getting a bit pissed off there, Bazza. But the big plays are yet to come.”

Mick increased the volume of his commentary to wider laughter.

Bazza looked at the smallest piece of the torn beer coaster. A knife or a scalpel could cut it a few times more but then it would be so small you would need a microscope and perhaps a laser and then goodness knows what technology to cut it further. His rudimentary knowledge of science assured him you would end up with cells, then molecules and then atoms but you would never just end up with nothing.

Just as technological developments allowed us to look further and further into space, perhaps the same applied to looking at things ever smaller. He just assumed the truth of his thoughts and it was unsettling; never being able to get to nothing and never able to get to the end of everything.

“Well, I’m just relieved it has an ending, Mick.”

Life, the universe and State of Origin

Mayhem at the democracy sausage stall

21 May 2022, 4:00pm A tale of a democracy sausage stall gone wrong.
Join the conversation
comments powered by Disqus
News updates