Why we must confront the racism of 'The Australian' cartoon

Yet again, The Australian newspaper has published a racist cartoon.

The details of this latest expression of Murdochian racism aren’t necessarily important, given that their content doesn’t vary. One of the common characteristics of racists performing and appreciating racism is their profound lack of imagination.

There’s been justified outrage on social media. There’s also been an alarming move from smart, articulate progressives to curtail discussion with recommendations to “ignore” the cartoon on the grounds that “giving it oxygen” will increase its reach, presumably encouraging further racist commentary and behaviour.

There’s been a lot of criticism of Talking Pictures not covering the Leak cartoon. To explain- Mike and I discussed it and thought that it would just amplify its message and bring a whole lot of new eyeballs to it. Apologies if it seemed we were condoning it. We were not.

This is a very tired and very conservative argument. For a start, ignoring something does not make it go away. That this even has to be said is immensely discouraging when we consider the history of this country since invasion. Our history is so studiously and persistently ignored, it remains a mystery to many citizens to this day.

It is also an extremely privileged argument, usually made by white people who have the luxury of ignoring racism because they aren’t its targets. It’s an argument made on behalf of those targeted, from a privileged perspective. 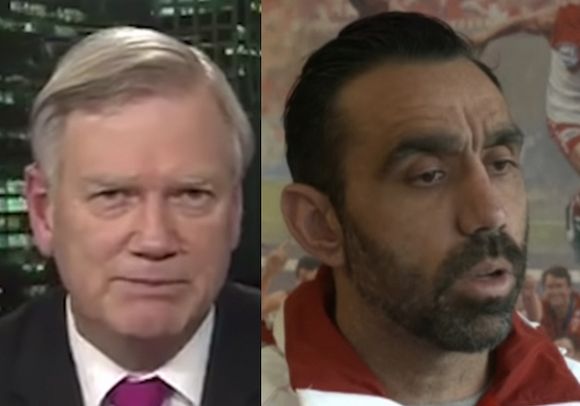 Has Andrew Bolt learned anything from the racial vilification case he lost in 2011? Alan Austin updates the record.

A counter-argument could be made that this position is in itself racist, or at the very least, paternalistic. White folks have no business deciding if and when it’s appropriate to call out or ignore racism.

It’s also a lot easier to ignore racism rather than publicly confront it, making the argument that addressing it only furthers its reach both convenient and comfortable. Several prominent journalists tweeted that they would not be discussing the cartoon, entirely missing the point that discussion need not be focused on the cartoon, but rather on the culture that allows – indeed encourages – the publication of such awful sentiments.

I've never seen a cartoon more naked in its ambition to be discussed on TV. Its cleverness-to-offensiveness ratio is grotesquely out of whack which is a firm indicator of attention-seeking. Further discussion just generates clicks for shit work.

This would necessarily entail a critique of the Murdoch press and it is noteworthy that very few mainstream journalists are willing to enter into such a critique. Far safer to focus on the cartoon and choose to ignore it.

Ignoring the obnoxious may well be a useful strategy in behaviour modification, however, a global news organisation with immense political power is not a recalcitrant individual. The idea that the same strategy can be successfully applied to such an organisation is both ludicrous and dangerous.

While the current uproar is related to one cartoon, this organisation has a very long and very ghastly history. Only the most naïve and unaware (or self-interested) could possibly convince themselves that ignoring its productions will be of any use at all.

There’s also a misapprehension that critiquing a racist cartoon or article necessitates republishing it. This isn't true. Those who want to see it for themselves can find their own way to the source. No one is obliged to republish offensive material in order to critique it, particularly when the source is the Murdoch press, whose reputation for offensiveness is well-known.

It is a convenient falsehood that publicly condemning or even discussing racist content in some way encourages or enables racism. The question that should always be asked is: who benefits by repressing such discussion? Who benefits through the practice of ignoring racist content?

It is also convenient to remove the racist cartoon from its context and pretend it’s an aberration, instead of an integral part of News Corp's business model.

In this process, they permit themselves to continue to ignore the multifarious transgressions of the racist and divisive beast that is the Murdoch press.

Of course, it isn’t easy to confront the very people you invite to participate in your programs and who may be your friends.

When so many smart, articulate people give a racist organisation a pass, yet again, it isn’t difficult to understand why racism has such a hold in this country and will continue to maintain that hold.

In recommending we ignore that cartoon, in repeating the falsehood that to ignore is to starve of oxygen and is thus a good tactic, people (overwhelmingly white people) with large platforms are yet again letting the racists off the hook.

In refusing to call out the cartoon you are refusing, once again, to call out so very much more.

It is the faux purity of ignoring one cartoon so that you can continue to ignore the far more threatening task of addressing the foundational racism of News Corp that is most sickening.

21 September 2021, 8:00am Scott Morrison has managed to flaunt his power through severing ties with France ...