Why the Turnbull Government's corporate tax cuts bill has collapsed

1. A business tax cut means less for schools, hospitals and other services

Giving business a $65 billion tax cut means billions of dollars less for services like schools and hospitals. Treasury modelling even assumes these company tax cuts will be matched by cuts to services and higher taxes on people instead.

2. The big four banks get an extra $9.5 billion dollars — really

Australia’s big four banks are some of the most profitable banks in the world and are making record profits. The tax cut will net them an extra $9.5 billion in the first ten years of the tax cuts, with $2.8 billion of that figure going to just the Commonwealth Bank alone. 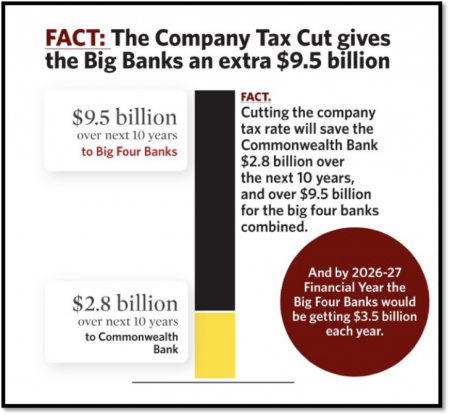 3. The big winners are tax avoiders and foreign shareholders

If Australian investors are the big losers why is the Business Council of Australia pursuing the tax cuts so aggressively? The BCA is funded by its members and even a cursory look at the BCA’s membership uncovers their true motivations. 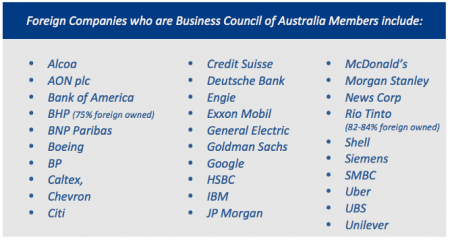 4. There is no correlation between lower company tax rates, employment, or economic growth

Are Coles or Woolworths going to hire more checkout staff if they pay less company tax? Don’t think so. There is no correlation between lower company tax rates and employment or economic growth. Common sense shows this and historical and international data confirm it.

5. Companies do business in Australia because they choose to do so

6. 15 companies share a third of the benefits of the cut

Just 15 companies will get a third of the benefits from the company tax cut. Most of these companies are huge players in markets with few competitors – for example, telecommunications and supermarkets – and therefore, are unlikely to change their hiring practices due to the tax cut.

7. There are better ways to create jobs and help the economy

There are way more cost-effective ways to create jobs and help the economy. Studies show that investing in schools and education is more likely to help the economy than giving businesses a company tax cut.

8. The benefits are based on absurd assumptions (to put it lightly)

The idea that cutting the company tax rate would suddenly cause multinational corporations to suddenly stop avoiding tax is ridiculous — optimistically termed a "morality dividend". This is just one of the bizarre assumptions in the economic modelling that claims to show company tax cuts help the economy. 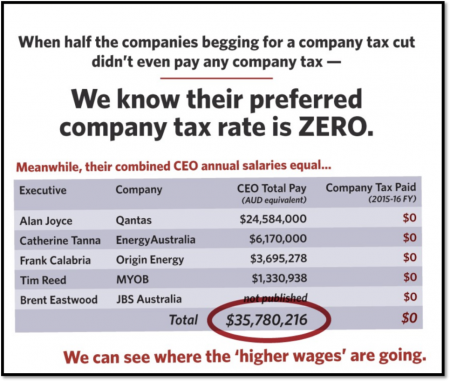 9. When will the company tax rate be low enough to satisfy big business?

Ten big business CEOs joined with the Business Council to ask the Senate directly for the company tax cuts, which they assure us will go towards higher wages for workers.

Our research shows not only have half these companies paid zero company tax in the last two financial years but it’s also clear where the "higher wages" are actually going.

10. The public knows it and CEOs privately admit it: the company tax cut will not increase wages or jobs

According to an AFR report, when the CEOs of the Business Council’s 130-plus member companies were asked in a secret BCA survey to nominate one of four options as their preferred response to the company tax cut in Australia, only 17% nominated higher wages or more jobs. Over 80% selected either returning funds to shareholders, or more investment.

Australia Institute research shows that when the public was given a similar range of options and asked what they believed companies would most likely do with the company tax cut, 78% of respondents selected "give it to shareholders", "more investment", or "increase executive pay"; and only 17% selected "increase wages" or "none of these" (that is, something else, like more jobs).

11. What’s the rush if the tax cuts for big business don’t kick in for over four years?

Why do we need a $65 billion dollar corporate tax cut right now? What’s the rush? While much has been written about the case for and against the cuts, the bigger economic and political question relates to why the Senate needs to rush through big tax cuts, that won’t kick in for more than four years, just five weeks before we see the budget papers?

Despite the fact that the cost of this legislation is ten times as much as we’ve spent on the Murray-Darling Basin Plan, the government is determined to rush through the legislation in the next Senate sitting — despite it having zero effect on this year’s budget.

12. The legislation hasn’t even gone to a Parliamentary inquiry

This legislation represents a massive hit to Australia’s revenue base, yet it hasn’t even gone to a Parliamentary inquiry.

And even it’s predecessor the Enterprise Tax Plan No 1 was only open for public submissions for just eight days (and two of those days were a weekend) with the committee reporting just 17 days later (including six days of weekends and a number of public holidays, depending on the state). And the thing is, there were no public hearings.

13. The company tax cuts aren’t even worth it

Even the Government’s own economic modelling shows that the benefits are tiny and over 20-30 years away. By then, we’ll have lost over $100 billion that could have been spent on schools, hospitals and other services. 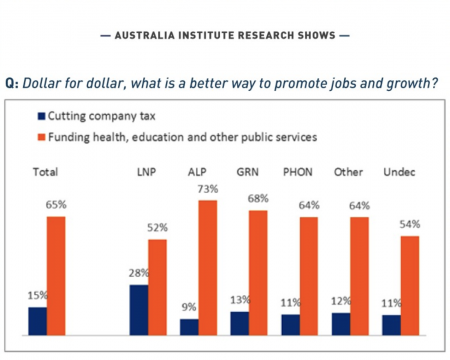 14. Voters don’t believe it will work

The Australia Institute’s latest research shows voters don’t even believe the government’s claims that a company tax cut would help "jobs and growth".

When asked, Dollar for dollar, what is a better way to promote jobs and growth? a majority of voters – across all parties, including Coalition supporters – preferred funding health, education and other public services, to cutting company tax.

"This is a $65 billion gift to largely big business. That's an enormous cost to the budget. Money that won't get spent on schools, education or public infrastructure..." - @TheAusInstitute's @BenOquist on company tax cuts.
More: https://t.co/YpUFJdTnlV #Studio10 pic.twitter.com/W4v42JaXKB

Why the Turnbull Government's corporate tax cuts bill has collapsed