What if Gillard were to lead?

After Prime Minister Julia Gillard's misogyny speech, the question no-one has asked, says Dr Geoff Davies, is why she doesn't do this sort of thing more often. 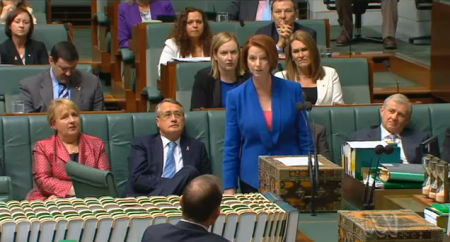 PRIME MINISTER Julia Gillard’s October parliamentary speech, in which she systematically tore down Opposition Leader Tony Abbott for his persistent misogyny, got a big reaction world-wide.

Why? Because it is a problem not often addressed in mainstream politics, and because of her obvious passion and authenticity, delivered with devastatingly articulate precision.

In all the discussion that followed ‒ about whether this was routine parliamentary posturing, about why the commentariat was caught off-guard, about whether she is hypocritical about other issues ‒ one question was missing:

Why doesn’t Gillard do this more often?

Why doesn’t Julia Gillard use her considerable intelligence and gift for rhetoric to speak out on other things that are not meant to be spoken?

Why, in other words, does Julia Gillard not lead?

Prime Ministers wield a lot of power.  If a Prime Minister speaks, the country listens. They can change the direction and tone of national discussions.

Past Prime Ministers have used this power.

John Howard used it regularly and to great effect, though unfortunately it was often to dog-whistle reactionaries on divisive and racist issues. Paul Keating used it in his Redfern speech in 1992, in which he frankly acknowledged the catastrophic effect on Indigenous people of European occupation.

Unfortunately Keating may have been the last Labor leader willing to step out in front and lead. Kevin Rudd’s 2008 apology for the stolen generations was profoundly important, but he was in tune with public sentiment, not leading it.

For a generation, Labor has allowed the Coalition and conservative media to frame the important debates. As a result, they are always on the back foot, always conceding ground. That is why they are in decline. To survive, they need to seize the ground for themselves. For our country to survive in reasonable shape, we need to stop wasting energy on secondary issues tackle some of the big ones.

What if Julia Gillard were to state these simple facts, and to face down the hysteria of shock-jocks and right-wing media, whose real goal is not to keep some refugees from drowning, but to destroy a Government they don’t like?  We could treat some vulnerable people decently, hold our heads high in the world, not be accused (rightly) of being racist, and gain some very enterprising citizens.

What if the Prime Minister were to point out that mining employs only about 2% of Australians, not 15% as many people have been given the impression, and that it contributes about 11% of GDP, not the 35% that many Australians believe?  It does account for nearly half of our export earnings, but it also inhibits other exports and new energy industries by pushing up the dollar exchange rate.

What if Ms Gillard were to say that more than 80% of mining profits go overseas? Those are profits from resources that belong to all Australians. What if she were to acknowledge that Gina Rinehart’s companies do useful work but that does not give Rinehart the right to run Australia? The case is there to be made for Kevin Rudd’s proposed super-profits tax, but neither Rudd nor Gillard has been capable of making it, or willing to make it.

What if Ms. Gillard were to point out that most economists agree we could aggressively reduce our greenhouse gas emissions for a quite modest cost to the economy? In fact significant reductions could be made while actually saving money, for example by abolishing the roughly $9 billion dollars per year direct and indirect subsidies to the fossil fuel industry.

To seriously reduce our greenhouse gas emissions, we do have to be willing to allow a restructuring of our economy, and especially to let the fossil fuel industry decline and let new industries rise. Renewable energy in Australia has been seriously hampered by stop-start policies that create uncertainty rather than giving security.

Would the Prime Minister be willing to speak plainly to the Australian people, and to face down the special interests, and their patsies in the media, that squeal loudly that the sky will fall if we do some of these things?

If Ms Gillard were to step up and actually lead, she might discover something remarkable. She might discover that many Australians are hungry for real leadership. They want Australia to be a place of decency and mutual respect. They don’t like the fear-mongering of the rabid right, and they don’t like the economic insecurities cultivated by market-fundamentalist policies.

Has Labor even noticed that John Howard put his kind all through the bureaucracy, government bodies and the ABC, and that a “culture war” continues to be waged by market fundamentalists and the attack dogs of the super-wealthy? Labor will continue its long decline so long as it dodges the battle. Or is it so disconnected from its roots that it has gone over to the other side?

If Ms. Gillard were to actually lead, she might not only revive her own chances, she might remind Labor why it exists, get it off the back foot, halt its long decline, and do the country a great service.