Warren Mundine: The white sheep of the family?

Warren Mundine's new "bromance" with Tony Abbott has surprised some, but not Dr Gary Foley, who has watched Mundine steadily tread a path to the Right for years.

IT WOULD SEEM at the present time that the former National President of the ALP, Mr Warren Mundine, has momentarily eclipsed the Cape York Crusader Noel Pearson as the Aboriginal Man of the Moment.

Whilst Mr Mundine may lack the intellectual firepower of Noel Pearson, he has nevertheless elbowed his way to the front of the pack with his dazzling late-life conversion to the cause of all things Tony Abbott. Mundine's strategic realignment to become best buddies with Abbott at the beginning of the 2013 Federal election campaign may have been a surprise to some, but only those who have not been taking notice of Mundine's mundane comments on Aboriginal matters over the past few decades.

It is therefore instructive to recall Warren's political trajectory over the long term if we are to begin to try and make sense of the political stance he has arrived at today. We must do this if we are to ascertain when Warren is driven by pure political opportunism alone, or whether there is some internal logic and rationale to his strange political path over the years. After all, here is a man who emerged from a respected Aboriginal family on the north coast of NSW; a family who collectively over many decades have been honourably involved in the struggle for justice for our people. 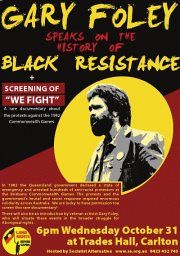 At this stage, I should declare my interests and advise the reader that Warren is a distant relative of mine and that this has tempered this article to the extent that I am treading cautiously in an attempt to not offend too many members of my extended family.

At the same time, I believe that it is important for Aboriginal people to subject Aboriginal leaders in positions of power and influence to a level of scrutiny that a biased and ignorant mainstream media often fails to, so readers need to be aware of the tightrope I walk as I write this article. Having stated that disclaimer, I would also point out that I have long referred to Warren as the "white sheep of our family" without seeming to upset too many relatives.

Warren was born to a devout Catholic branch of my family and was the ninth of eleven brothers and sisters. His parents, Roy and Dolly, were a strong and formidable couple who were clearly very influential on the young Warren. From his father, Warren says he acquired a strong belief in the importance of home ownership as well as a commitment to trade unionism.

"That was an important part of the bond between my father and I, that we were both union men...It would never have occurred to me not to join."

From his mother he derived a strong attachment to Catholicism, which he has said, "very much shapes" his political views:

"To me it's a very important spirituality thing. I don't think it's all I'm about, but my faith has had a great influence on my life and got me through a lot of tough times."

In 1963, his family moved from their home in South Grafton to Sydney suburb of Auburn. Later, Warren would begin his working life as a factory fitter and machinist, and later working for the Sydney Water Board. He went to a TAFE college at night and earned the Higher School Certificate, which enabled him to move up to a white-collar job as a clerk in the Taxation Office in Martin Place. He also briefly studied in Adelaide, where he attended the former South Australian Institute of Technology and earned a community development diploma, but this limited level of education has not inhibited Warren's spectacular rise to prominence in Australian politics.

His political career probably began around 1982, when he can be seen waving the Koori flag and making a couple of radical speeches at the major demonstrations against the Commonwealth Games in Brisbane. In Madeline McGrady's film "We Fight", on several occasions Warren can be seen lurking behind me as I am making a radical speech condemning to policies of the Bjelke-Peterson government of QLD.

Again during 1987, in the lead-up to the major Aboriginal demonstration against the Australian Bicentennial, Warren is to be seen making a radical speech on a national televised forum on ABC-TV. Thus, in the beginning, Warren appeared to be politically Left of centre, but that superficial impression would not last for long.

In 1995, he began his journey to the Right of politics when he successfully stood as an independent candidate for Dubbo City Council in central-west NSW; he later became deputy mayor, a position he held until 2004. But his real rise to prominence came when the ALP decided in to reform its rules and allow the rank and file to choose three national presidents for the next three years. This led to the election of Carmen Lawrence as a token female President for 2004; to be followed by the grand old man of the ALP, Barry Jones, for 2005; and a token Aborigine, Warren Mundine, for 2006.

At the time, there were not a lot of Aboriginal people who were members of the ALP after the great Land Rights sell-out of the Hawke Government, so Warren had a relatively clear run to be the token Aboriginal President. It should also be remembered that Warren was sponsored in the push for Party President by members of the corrupt NSW Right faction of the ALP, including Mark Arbib, Karl Bitar and the now notorious Eddie Obeid.

But even before he would take up the Presidency, Warren managed to embroil himself in controversy by accepting an offer from the Howard Liberal government to become part of a new appointed Aboriginal advisory body to replace the Hawke government's failed elected body ATSIC. When Mundine was attacked for hypocrisy by NSW Labor Minister Linda Burney as well as the New South Wales Aboriginal Land Council, he was supported by Mark Arbib who asserted the nonsensical proposition that there was no inherent conflict between Mr Mundine's membership of the NIC and his role as incoming national president of the ALP. These should have been clear signals to both the ALP and the Aboriginal community that Mundine was on a path to the Right of politics.

Warren's subsequent alignment with Twiggy Forrest's dodgy organisation Generation One, as well as his oft-expressed admiration for the right-wing ideas of Noel Pearson and Marcia Langton were also clear indications of his drift to the Right. That drift was no doubt expedited when the ALP showed no inclination to giving him a safe seat and a ticket to parliament that a former Party President might be entitled to expect. Mundine had discovered what a lot of us already knew; that the ALP was such a fundamentally racist organisation that they had never in their 100 year history ever enabled an Aboriginal party member to be pre-selected to a safe seat. This was probably a major factor, along with a serious heart scare in October 2012, that resulted in his finally allowing his membership of the ALP to lapse last year.

Since then, two major events appear to have sealed Warren's arrival as the new Aboriginal darling of Australian Right-wing politics. The first was his marriage to Elizabeth Henderson, who is the daughter of Gerard Henderson, conservative political commentator and a former chief-of-staff to John Howard. The second is his new political marriage to Tony Abbott's new indigenous advisory body.

Warren met Elizabeth three years ago at a function at the right-wing think tank, the Sydney Institute. At the time, both were married to other people.

About the end of his second marriage, the devout Catholic Warren has said:

"I never thought of myself as a bloke who was attractive to women, but after I became president [of the ALP] it was like I became sexy to some people...I don't really get it. But I was getting offers. And the ego got the better of me and I took one of those offers, and I got what I deserved, which was a divorce."

In February this year, 450 close personal friends turned up at Luna Park in Sydney (an appropriately Monty Pythonesque venue) for the wedding of Warren and Elizabeth. Sadly, I have to report to readers that my invitation appears to have been lost in the mail, but I am told that among those who were in attendance were Tony Abbott, Twiggy Forrest, Jenny Macklin and Marcia Langton along with a large contingent of other right-wing luminaries and their acolytes. The mere thought of the business and networking opportunities on that day just boggles the mind...

However, it is Mundine's arrival at the political door of Tony Abbott that appears to have surprised many pundits, even though one didn't need to be a clairvoyant to predict that this might happen. Abbott has declared that he and Warren are "kindred spirits", so we can now expect the "bromance" between these two staunch Catholic boys to develop and grow. However, it remains to be seen whether this convenient relationship (or relationship of convenience) will ultimately be to the benefit of many Aboriginal people.

This story was originally published on Tracker and has been republished with the author's permission. Read more by Dr Foley at the Koori History Website Project.

Warren Mundine: The white sheep of the family?