The World Congress of Families is coming to Melbourne this month and they’re receiving a lot of support from various federal and state Liberal Party members. Tim Robertson laments what this means for Australian democracy.

‘The test of a first-rate intelligence’, ruminated F. Scott Fitzgerald, ‘is the ability to hold two opposed ideas in mind at the same time and still retain the ability to function.’

By this measure, Liberal Senator Cory Bernardi, may well be Australia’s most intelligent Federal politician.

If he has a contender, he or she must surely come from the Far Right. The degree to which many of their most fundamental beliefs contradict one another would be paralysing for most, but for Bernardi and Co. this doesn’t seem to pose a problem. 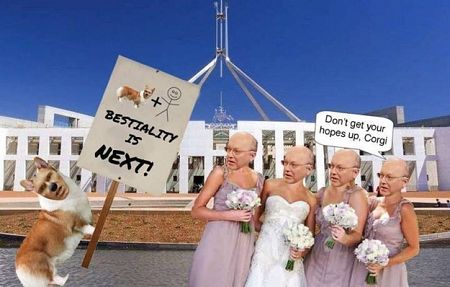 Cory Bernardi had to resign as PM's Parliamentary Secretary after linking gay marriage to bestiality (Image via wtbuzz.com)

Without a trace of irony, these free-market crusaders can spend the morning preaching their neoliberal propaganda and espousing the virtues of small government. Then, after lunch, they go to work advocating for more regulation to allow the government to tell women how they should use their wombs.

These people – take the Victorian MP Bernie Finn, who believes women who’ve been raped shouldn’t be allowed to have an abortion – usually describe themselves as ‘conservatives.’ But even I – a card carrying member of the Left – feel compelled to defend the fine political tradition, of which people like Edmund Burke and Alexis de Tocqueville are admirable guardians. ‘Conservatives’ in the mould of Finn have migrated so far to the Right that they now find themselves in an ideological quagmire (perhaps quicksand would be a better analogy).

There’s certainly merit in the idea that the standard Left/Right axis – which has its origins in the French Revolution – needs an upgrade. But why – if the axis is so broken – is it always members of the Right who the anti-abortionists or climate change deniers?

In a piece for Independent Australia, Barry Everingham documented the rather sordid infatuation of a number of Australia Liberal Party members with the fanatical anti-abortion and virulently anti-LGBT World Congress of Families. (Their grandiloquent name reeks of an organisation trying to masquerade as something they’re not.) This doesn’t bode well for Australian democracy.

In October last year, the World Congress of Families (WCF) claimed credit for cancellation of a Gay Pride Parade in Belgrade. Serbian authorities were concerned that the hate stirred up by the WCF would lead to violent clashes. But this was a relatively mild example of the organisations willingness to subvert national laws and employ violence. As an organisation they are flagrantly anti-democratic and have grown into their role as a mouthpiece for the very worst authoritarian regimes. 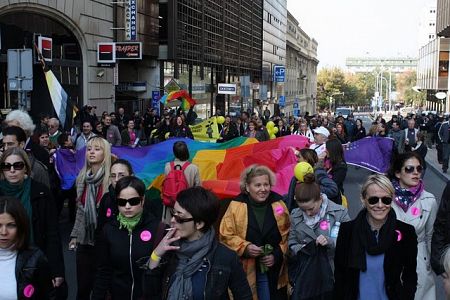 The WCF’s managing director, Larry Jacobs, has praised Vladimir Putin and the Russian Duma’s crackdown on what it calls the ‘propaganda of non-traditional sexual relationships.’ These laws have further marginalised the LGTB community in Russia and stripped them of any semblance of protection they’d hoped to get from the State. The St. Petersburg Pride Parade ended when neo-nazi groups attack the participants. In Moscow, gay-rights activists were arrested while protesting the Kremlin’s new legislation

Despite this, Mr Jacobs and the WCF – always careful to choose their works carefully so as not to reveal the full extent of the bigotry – have continued to praise Russia’s crackdown. 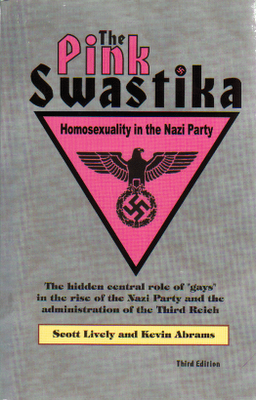 A better way to gauge the WCF’s beliefs though is to look at some of the internal discussion.

Enter born-again Christian and pastor, Scott Lively, who – among other things – helped plan the WCF conference in Moscow. He’s also the author of the Holocaust revisionist history, The Pink Swastika, and a man to whom all of history’s failures can be traced back to someone being gay somewhere:

Lively’s role as a peripheral force – dismissed by most of the American Right as a nut-job – changed in 2009 when he was invited back to Uganda (he first visited in 2002) by an influential Ugandan pastor, Stephen Langa. He met lawmakers, lectured at universities, spoke with over fifty parliamentarians and hosted a conference that received an unprecedented amount of media attention. It all culminated in a five-hour sermon broadcast on national television, in which he claimed homosexuals were aggressively recruiting Ugandan children.

The public furry whipped up by Lively didn’t take long to materialise into something far more destructive. Following a meeting of his supporters in the Ugandan capital of Kampala, a crowd marched on parliament and called for harsher laws against homosexuality. The government respond in April 2009 by making homosexuality – or even touching someone of the same sex with ‘romantic intent’ – a crime punishable by life in prison (the initial legislation prescribed the death penalty, but that was later repealed).

The legislation echoed much of the pseudo-scientific rhetoric Lively can be seen employing in footage from the Ugandan conference.

In the midst of the hysteria, the Uganda newspaper Rolling Stone published the photo of gay rights activist, David Kato, under a banner reading ‘Hang Them’. A few months later, he was beaten to death with a hammer. The authorities chalked it up as a robbery, but that seems unlikely in light of the anti-gay vigilantism sweeping the nation.
It would be interesting to know what Attorney-General George Brandis – a man who, prior to the Prime Minister's backdown on 18c, believed in our right to be a bigot – makes of all this anti-LGBT violence. As the self-styled national protector of John Stuart Mill’s libertarian tradition, do the WCF and its cohorts over-step the mark?

That the question even needs to be asked is a reflection of just how bigoted (legal or not) their message is. Perhaps the attorney-general would make the case that they’ve never broken any Australian laws. If they incited violence in Russia or Serbia or Uganda, well, that’s unfortunate for the gays and lesbians over there.

It may also be wise of Brandis to flag any rumblings of public discontent with a couple of his parliamentary colleagues – Senate leader Eric Abetz and Cory Bernardi (who is always described as a ‘maverick’, but for whom the word ‘reactionary’ would be a better fit) – who are listed in the program as supporters of the event.

"Freedom for Bigots" @moir_alan commenting on our so-called evolution a.k.a 'devoltion' since Brandis & #LNP #auspol pic.twitter.com/0DkK97zuU4

The number of state and federal politicians that support and are willing to be involved in the ‘Congress’ is another black mark against Australia’s increasingly tarnished democracy. That elected officials choose (and feel comfortable enough) to align themselves with an organisation that travels the world preaching hate and violence is another reflection of just how broken our nation’s moral compass is.

Tim Robertson is an independent journalist and writer. He divides his time between Melbourne and Beijing. You can follow Tim on Twitter @timrobertson12.

We need to talk about radicalisation

Free market fundamentalism and the rise of ISIL

20 October 2014, 9:00am The neoliberal agenda of the countries that led the invasion and occupation of Iraq ...

6 August 2014, 7:40am The World Congress of Families is coming to Melbourne this month and they’re ...
Join the conversation
comments powered by Disqus
News updates