Turnbull vs Abbott: D-Day Down Under?

After the Budget fails – and it will – Malcolm Turnbull will bring on a spill, says Bob Ellis — and win.

FOUR YEARS AGO, Julia Gillard swore — truthfully, I think — that she had been doggedly loyal to Rudd though many tempters had bewhispered the possibility of her staging a coup. And she was so incensed, in due course, at his petulant accusation of her secret treachery that she flipped and, in a series of events that lasted no more than five hours, brought him ‒ spontaneously ‒ down.

This is her story and I am inclined to believe it.

Malcolm Turnbull is now in the same situation, pretty much.

However Malcolm protests his loyalty, he will not be believed. He will lose sleep, grow testy and, eventually, he will flip, storm out of the room, and mount a challenge — like Gillard.

Does he have the numbers now?

Probably not. Bolt and Jones are goading him because he doesn’t … yet.

And they are goading him also because they are in a panic over how unpopular Abbott has become.

What will Malcolm do?

He will not resign, join PUP, or become Labor’s shadow minister for finance.

He will not mount a challenge, yet, with the numbers he has, which are presently insufficient.

He will bide his time. He will try to stay in the tent, however he may be shamed in the imminent, vengeful reshuffle. He will continue to perform really well ‒ better than Abbott, better than Hockey, better than Morrison ‒ in Question Time.

What he may do, I think, is sue Bolt, Jones, Murray, Devine, Albrechtsen, Wright and Ferguson, and run the cases himself. He will settle for published apologies and a donation of $100,000 each to worthy charities of his choice. He will win the round.

And, when the Budget fails – and it will – he will collude with his friend Julie Bishop, who will bring on a spill and become Prime Minister in September. And be thereafter hard to beat.

Is he on some form of medication? There is the sense he was chemically disturbed or, for that half hour, deranged.

The game’s afoot, I think, and Bosworth nearing.

A horse! A horse! A stalking horse! Of any colour! 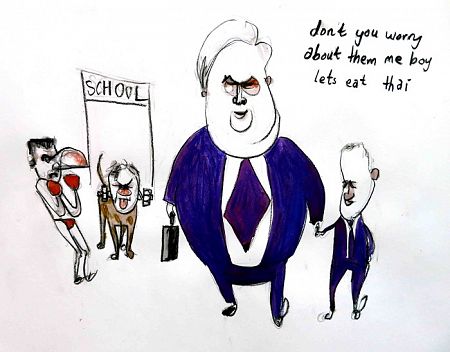