President Trump gained a number of loyal followers during his time in the Oval Office, but there are reasons why his popularity may wane, writes Paul Begley.

EVEN IN BITTER election contests, there is an understanding among most departing leaders that the new leader needs space and clean air and defeated leaders can usually summon sufficient grace to concede leadership, mindful that doing it well or badly affects their legacy.

Australia’s Tony Abbott spoke to that idea in September 2015 when Malcolm Turnbull replaced him as Prime Minister following an acrimonious challenge. Abbott promised there would be “no wrecking, no undermining and no sniping”. He didn’t measure up to that standard, but he knew it was the right thing to say and he memorably said it.

Despite the angst emanating from President Donald Trump’s family and his campaign about supposed 2020 Election fraud, it’s clear by now to most observers in America and around the world that Joe Biden has been legitimately elected.

As the reality dawns that Donald Trump’s term as President has come to an end, there is talk already about who among the Trump team might run in 2024: Don Junior, Ivanka, Mike Pence, Nikki Haley, Donald himself are mentioned. There is also talk of Trumpism transforming into a movement or a television franchise.

The 72 million voters who cast a ballot for the incumbent attest to the reality that the 2020 loser is also the winner of a significant number of votes, despite being around six million votes short of President-elect Joe Biden’s record tally. The question is what proportion of the loser’s voter base would transform into what might become a destabilising Trump movement.

Movements usually require a coherent and inspirational manifesto that resonates with those who participate in them. Bernie Sanders has led a movement that does not require ballot-box legitimacy but brings together those who share the movement’s stand on healthcare, the economy, energy policy, building infrastructure and the like. It also counts among its fellow travellers inspirational leaders such as Congresswoman Alexandria Ocasio-Cortez who espouses the documented idea of a Green New Deal and Andrew Yang who espouses the idea of a universal basic income.

A Trump movement, if one were to emerge, would have no manifesto or at least not one that is written down. Its intellectual foundation would potentially be discoverable in the uncollected tweets, media doorstops and rally speeches of its leader. Each tweet and doorstop is short, even the long ones, the Twitter limit being 280 characters. Doorstops on the White House lawn are fleeting dog whistles and thought bubbles tossed to reporters on the run and possibly stepped back the next hour, the next day or during the week that follows. His rally speeches are long, most extending to an hour or more and wandering off onto many side roads, if indeed there was a central road from which they departed.

Were a Trump movement to gain traction, it would rely for content and inspiration on the repetitive themes of victimhood and resentment that pervade the leader’s repeated public utterances and that resonate with his support base. The themes touch on the machinations of the conspiracy-laden deep state, the Russia and impeachment witch hunts, the COVID-19 hoax, the Obamagate outrage and an assortment of other batty conspiracy theories. 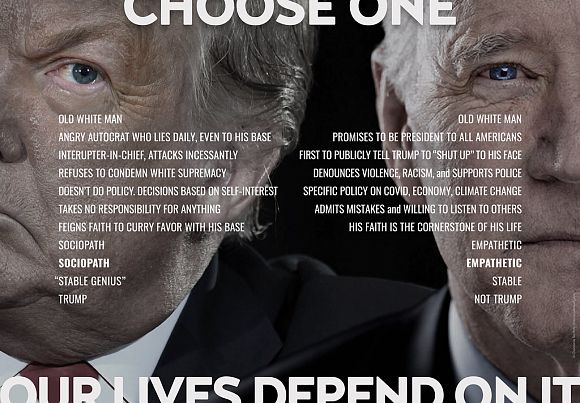 Cometh the hour, cometh the People. At last America can breathe easier. Much of the world too, Australia included.

Dissemination of these themes requires regular access to free daily media, which will be harder to get when the leader of the movement no longer occupies the White House. Without the trappings of office and the financial backing that taxpayer dollars have given him, it's questionable whether Trump and his supporters will have the heart, the stamina or the financial wherewithal to persist in a relatively under-resourced movement beyond making menacing sounds about Second Amendment rights.

Feeding off resentment about the Election loss to Joe Biden will likely have a use-by date. It’s also likely that Trump’s energy will be drained by fighting off personal battles in the courts on a wide array of indictable offences including insurance fraud, criminal tax evasion and obstruction of justice, all without the protection of a servile attorney-general and the office of the presidency. Worst of all, he would have to fall back on his personal fortune, to the extent that his wealth is what he claims it to be.

Apart from any momentum Trumpism might generate on its own steam, its leaders will need to accept that they are operating in an environment with Biden leading an experienced administration that will have its hands on the levers of power and the knowledge of how to use them. The Biden-Harris administration will likely enjoy an Electoral College mandate north of 300, in line with that claimed by Trump in 2016.

The majority leader in the Senate may well still be the Republican Mitch McConnell, but McConnell is driven by his own obsessions and is not a true Trump loyalist. In addition, his majority may be thinner and leave him open to rebellious votes from the likes of Republican Senators Mitt Romney, Susan Collins and Lisa Murkowski, who will no longer live in fear of a Twitter-storm from the Oval Office if they step out of line. Biden will have a Democrat House and his own mandate, plus many years of experience in crossing the aisle and with a will to do it.