Tony Abbott claims to be a friend of Indigenous Australians, regularly spending time in their communities "volunteering". Martin Hodgson puts to rest this enormously expensive lie.

BY NOW, we’ve all heard it.

As soon as criticism of the LNP’s policies on Indigenous Affairs (or lack thereof) are raised, the default position of LNP members, journalists and the apologists of it in action is rolled out.

Tony Abbott volunteers in Indigenous communities, so we are told.

So sure of this position ‒ so much has it become the accepted reality ‒ that statements from the LNP and journalists come to us on this subject with gay abandon.

"We know that Tony Abbott works in Indigenous communities at least a week or two a year, and he has said that if he is elected Prime Minister that he will continue to do that and that he will take senior bureaucrats with him. He has done that in Cape York…"

We know this, do we? This just goes completely unchallenged and is gospel truth, is it?

Well, here is what I know:

In August 2012, Tony Abbott did indeed go to Cape York — but it wasn’t for a week or two as Mr Pyne suggests.

It was a working bee of sorts and some of Australia’s business leaders were taken along to volunteer as well. Photos of Abbott with tools in hand were taken and the myth of Abbott the saviour of the Black man had a wonderful photo op.

No problem so far — until you examine the  Expenditure on Entitlements paid by the Department of Finance and Deregulation to Mr Abbott for this “Volunteering” trip. On page 12, we find an amount of $9,636.36 taxpayer dollars, spent to fund the hire of a private charter flight for the 2 days.

(Click on image to see full document in PDF)

Now, I don’t know about you, but when I volunteer to hammer in a few nails for a day or two I don’t ask the people of Australia to cough up 10 grand. That isn’t volunteering — that is the most expensive labourer in the history of Australia. I wonder what the sandwiches cost?

So, was this just a once off? Nope. Not on your life!

On another one of his trips to an Indigenous Community in 2010, Mr Abbott was off to sell his version of the Wild Rivers Legislation to the traditional owners it would impact. Not quite volunteering, as such — but policy is good and spending time in Indigenous communities is to be encouraged if it results in consultation that means that locals get their message across, resulting in positive policy changes.

So, just how much did Mr Abbott listen to the local people of the Indigenous community he visited? How much was this reflected in his policy? Because hey, we know ‒ or are told ‒ he has the ear of the Black man…

''We do not support his shonky Bill,'' said activist Murrando Yanner of the Carpentaria Land Council. ''We think it is badly drafted and legally unenforceable.''

''He will leave unhappy,'' said Mr Yanner, who supports the existing Wild River legislation. ''His new Bill is a dog's breakfast.''

Well, that didn’t go to plan. It was neither volunteering nor listening to the locals.

No harm in trying, I suppose, and if you spent the week out in the community helping, it has some purpose, but little use if the status quo is maintained and you ignore the wishes of the people you supposedly assist.

Well, there is some harm and it wasn’t for a week.

The harm comes in the form of another private charter flight — cost to the tax payer: $32,545.00. Because nothing says I volunteer to help those in need like a $30k ride in a jet. Oh ... and that week or two Pyne talks about? That trip that cost we, the taxpayer, $32,545.00 in flights alone was for just one night! 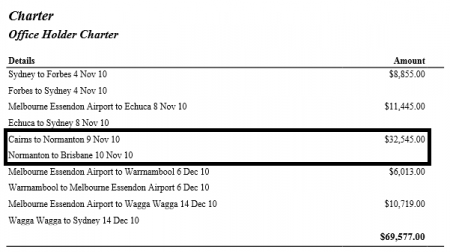 (Click on image to see full document in PDF)

So, when weeks are days and days cost tens of thousands of dollars and volunteering is photo ops and not listening to the traditional owners of the land, you have to rename these volunteering trips. Maybe to Tony Abbott’s very expensive, taxpayer funded, private jet flown, not listening tours of outback Australia.

Next time an LNP member or journalist drops the “Abbott volunteers for weeks in Indigenous communities” line, call bullshit! And then refer them to these figures. Three days and nearly $45,000 in flights alone — if that’s volunteering, the rest of us are really doing it all wrong.

Many of us, some one million odd Australians, do volunteer every year for community organisations; they slog their guts out, donate large amounts of money and never even ask for a thank you.

The audacity of this public lie should be even more shocking when we remember that Indigenous life expectancy is at third world levels and Mr Abbott is racking up huge bills to do nothing about it while claiming credit for work he simply doesn’t do.

This story was originally published on Martin Hodgson's blog 1deadlynation.wordpress.com and has been republished with permission.