The Australian Federal election brought to the fore Australia's particular brand of thoughtless sexism, as well as the women who go right along with it, says Sarah Brasch. 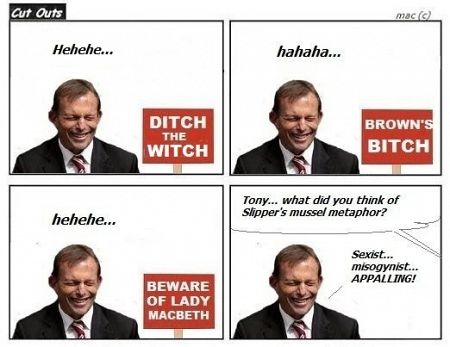 BEFORE THE ABBOTTS have even had a chance to move into The Lodge, the guys in fluoros, the ones who charged into Early Voting clutching copies of Real Solutions, have grabbed their blue ties and taken up residence.

They’re back and, until the double dissolution, will make their presence felt.

Throughout the election campaign, we heard men speaking and men proposing; saw males being action men and men talking to each other.

Those men were annoying a heck of a lot of women.

Both party leaders challenged the other to “man up”. Why not “woman up”?

We heard a lot about “Mr Abbott” and “Mr Rudd”. That sounded like two kids trying to be on their best behaviour in public.  It certainly reinforced their gender.

The sports analogies returned as surely as blokes in suits kicking footballs.

Stephen Smith only got worked up about the Dockers’ surprise win over Collingwood on the ABC’s election night show.

Over at 9’s Wide World of Sports style election coverage, a pool of circling sharks (above) served up a horrifying version of violent public disgrace.

It wasn’t remotely funny but did put the Aussie male sense of humour in full view.

Tony Abbott referred to seats being "in play” during his victory speech. Julie Bishop got carried away with her leader’s sporting prowess. We now know that Tony is the best bloke in the change rooms after a hard match.

Tony was seen riding bikes in lycra, pounding up steep inclines and working out with tough army guys in the tropics.

We found out on Kitchen Cabinet that Tony does not know what you do in a kitchen. His daughters had to make the salad.

Kevin didn’t either, much, but at least he gave the brownies a whisk to look willing.

Tony said one of his candidates had “sex appeal”. That wasn’t a Dad moment or even daggy, rather as a Liberal candidate said to me sharply, “thoughtless”.  She was right.  It was not remotely defendable, so how did he get away with it? Jaymes Diaz wasn’t that bad.

Tony said he did not realise referring to looks would cause a reaction. It did. It lit women up all over the country.

When asked about Julia’s misogyny speech by Annabel Crabb in the same episode of Kitchen Cabinet, he was brusque. “Invalid,” he replied, without an ounce of introspection or self-awareness.

Clearly, Julie Bishop doesn’t call Tony out on this stuff. Rather, she plays along with it: drooling while articulating “budgie smugglers”, making risqué jokes at launches, batting her eyelashes at the camera or, often, at Tony.

Nor do Peta, Bronwyn, Kelly, Marise, Michaela and Connie. Maybe too busy trying to hang onto their jobs in the maelstrom of unreconstructedness?

The Liberal Party believes in merit. That is why you cannot name very many of its female parliamentary members.

Only Julie and Sophie were singled out for Cabinet jobs. Everyone knows Sophie, but she mightn’t make it after all.

Tony went everywhere during the official bit of the campaign accompanied by Bridgie or Francie, or both. Not much sign of Margie (they all rhyme!) although she did try a kiss at the voting centre:

We saw long shots of skinny leggings and ankle boots, almost missed bandy Tony-in-the-middle because we were too busy ogling the youngest Abbott.

I am sure many of the red-bloodeds voted for the best leader’s babes in the Reps, Sex Party for the Senate!

Tony went around for much of the campaign holding hands with his kids. We don’t often see twenty-somethings clinging onto their father at work.  Why is applying for the PM’s job different?

Those Abbott “glamazons” sporting virginal “all-white creations” – after having been advised by their father not to give it away lightly – became an unmissable part of his campaign.

Patty Huntington of Women’s Wear Daily hopes they will now star at Australian Fashion Week — that ideas fest and intellectual hotbed. This will be in advance of the weddings of course – though not gay weddings.

Poor Kevin did not rate here. If he had tried anything vaguely sexist, Therese and Jess would surely have jumped on him. Besides, Kev is more in touch with his feminine side than Tony will ever be. It’s too late though, K07’s zipped.

It is not clear what Labor are up to right now. First blush, they said they did not want more than one candidate for leader. So far, it has been all about Bill and Albo, Tanya’s hardly been mentioned, Jenny not at all. This isn’t democratic. It’s more of what I saw over and over again at work.

The male successors get ordained early just like they do in a monarchy. They then stand patiently in line for years, not daring to put a foot wrong or think a thought that hasn’t been endorsed up the line.

This is the Aussie way and pervades every hierarchy in the country — politics worst of all. Women don’t get a look in. If, for some inexplicable reason, they do .... well, we all saw what happened to Julia.

The boys’ way is back.

As I heard one very senior public servant say after Howard got in:

“Good! Now we can drop all that he/she nonsense.”

And that was only the start of it.

However, Tony and “his boys” should not underestimate how cranky women are about everything that happened so far this year and last.

One newbie Senator says she’s going to take on the “Liberal boys’ club”.

Good on you, Jacqui Lambie, Palmer United from Tassie. The sisterhood is right with you on this one.

Sarah Brasch is the National Convenor of Women for an Australian Republic.