‘RESIGN, DICKHEAD’ was one of the most popular signs at the Melbourne March in March last weekend — attracting the ire of Andrew Bolt. Banner creator Lyndon Morley sets the record straight.

In your article ‘Barbarians march in March’, 16 March 2014, I’m one of the creators and carriers of the ‘RESIGN, DICKHEAD’ banner; one of the protesters, in your words, whose

‘… political discourse is conducted in the language of hatred and vilification.’

I must say how flattered I am to have been insulted by the most vociferous, bigoted sycophant in the country.

First, I’d like to put my banner in perspective.

Australia has a long cultural history of vulgarity in the appropriate context.

The Australian Democrats campaigned to ‘keep the bastards honest’ in 1980 and the word ‘dickhead’ is surely no more offensive 34 years later. The TAC’s famous “bloody idiot” campaign, although not political in nature, is a reflection of Australian culture’s treatment of pertinent insults.

While the context of the surrounding message is always more important than any subjectively vulgar sound-bite, the ‘RESIGN, DICKHEAD’ banner is not a symptom of Australian culture so much as it is a result of a political landscape poisoned by the spiteful, ignorant rhetoric of the Andrew Bolts of our country.

You’re shocked and offended because someone had the audacity to insult your paragon PM, but you’ve accomplished exactly what Master Murdoch intended for you — you’ve poisoned Australian politics with hate and spite. You seem to be upset simply because you’ve contributed to dragging political discourse in this country down so far that someone on the left-wing has finally stooped to a level you can actually understand.

I never personally chastised anyone for the ‘Ditch the Witch’ fiasco or any of the rampant misogyny or ignorant vilification meted out to Julia Gillard — as asinine as it all seemed. Just as I have and just as you do, all Australians are welcome to express their political views in whatever stupid way they want.

For you to spew vapid, self-righteous indignation, however – when your own banal insults are thrown back in your direction – is a startling example of the hypocrisy and cognitive dissonance you personify.

While most of the protesters were conveying much more eloquent messages than me, I was waving around a big banner that was 50 per cent the word dickhead. I’m not pretending to be a model of infallible virtue, I joined you and Abbott in the proverbial cesspit you’re turning Australian politics into. You’re the journalistic equivalent of a protester with a vulgar banner — except you’re neck deep and venting vapid rage like I’ve dirtied your shiny shoes.

As your puppetmaster Murdoch intended, your malicious input into Australian politics has succeeded in filling Australian politics with hateful remarks and vacuous insults. On the left-right scale, you have contrived to pull political discourse down. Are you really shocked that people have started participating in the landscape you fomented — or are you shocked because only the Bolts and the Abbotts are supposed to communicate in the language of childish derision?

The ‘RESIGN, DICKHEAD’ sign was not clever, but it had to convey a powerful and succinct message so that it could be read from any distance amidst a crowd of thousands.

You, Mr. Bolt, have the opportunity to spread your hateful messages to all of your dozens of readers without any apparent restriction on their length. You can use analogies and examples, you can present your argument with subtlety and nuance, but instead, you spew vapid lists of insults as if you also expect your message to be read from any distance amidst a crowd of thousands.

I intend to write a separate piece on why Tony Abbott is a dickhead and why I felt it was appropriate to direct that message towards him, but here’s the synopsis:

Murdoch Family Inc and their subsidiary the LNP have turned Australian politics into a no-holds-barred bogan battleground of insults and insolence. While the NewsCorpParty is broadcasting every hateful remark it can use to whip its audience into a frenzy, it’s also easier to get time on the other networks by screaming obscenities than it is by conveying political goals.

In the garbage dump you’re trying to help turn Australian politics into, I obviously feel it was appropriate to call the Prime Minister a dickhead.

I can’t speak for everyone who dislikes the Prime Minister, but I think he needs to know how strongly that sentiment is felt.

You can’t just sell off parcels of our country without being told you’re a dickhead.

You can’t dredge our reefs, chop down our world heritage listed forests and kill our animals without being told you’re a dickhead.

You can’t abolish our important scientific and social institutions, oppress minorities or defund education, health and welfare without being told you’re a dickhead.

I think it’s fair to call him a dickhead. I hope that it sticks and that for the rest of his life, Tony Abbott is known as Tony Abbott the Dickhead PM.

I hope people who meet his daughters say

“Oh, your dad is the famous dickhead!”

I hope his Wikipedia page ends up with an entire chapter dedicated to the dickhead aptronym.

I hope it stains his life in such a way that it makes every Australian politician worry about what they’ll be called.

If you’re so upset you’re living in a country where people who disagree with you are willing to act like you, maybe you shouldn’t be a professional stone thrower or subscribe to a political ideology as shallow, fragile and transparent as glass.

The only reason people like you exist is because a vacuum of hatred, fear and anger exists where right-wing perspectives are being proven obsolete. You are a relic of bygone ideology; a museum exhibit of lamented values from recent history. Like my sign, the only notable thing about you individually is that you are the loudest and most obnoxious of your kind. Like all of your kind, you are a vestige of redundant politics and you’ll fade away as your ageing audience go senile or die due to the health cuts you demanded.

You are the enemy of civil political discourse.

But at least you can pat yourself on the back for having pulled political discourse in Australia down to this level.

You’re a dickhead too.

This piece was originally published on lyndonmorley.com.au and has been republished with permission. You can follow Lyndon on Twitter @lyndonmorley. 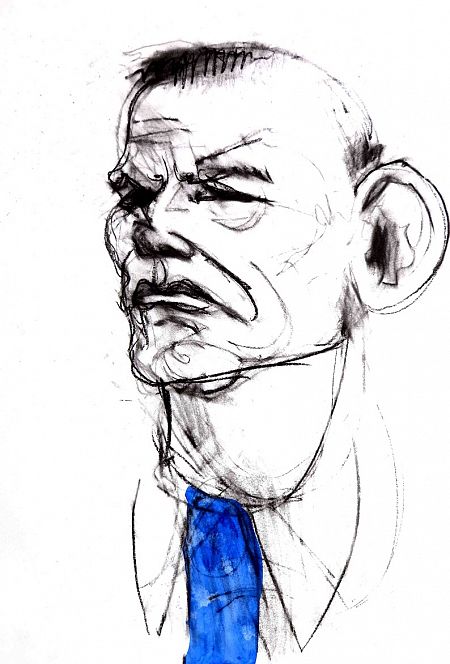 20 March 2014, 12:01am ‘RESIGN, DICKHEAD’ was one of the most popular signs at the Melbourne March in ...
Join the conversation
comments powered by Disqus
News updates