Tony Abbott and the Tent Embassy

Why did Tony Abbott retract his comments about it being time for the Aboriginal Tent Embassy to move on? John Turnbull comments. 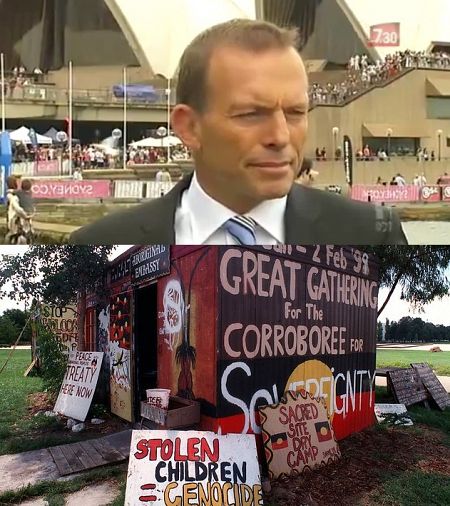 It started out as your standard photo opp, where Tony Abbott stands in front of something interesting (in this case the Opera House) and says something insightful and vote-attracting.  At least, that’s the theory.  In reality, these media calls usually result in banal soundbites and the image of the opposition leader in an orange safety vest — but this time Tony had a surprise up his sleeve.

Asked whether he thought the tent embassy was still relevant, Mr Abbott responded in a predictably wishy-washy manner, vaguely implying that the Aboriginal community should perhaps move on from problems that afflicted them forty years ago. This did not go down well with the denizens of the tent embassy, who interpreted these comments to mean the Tent Embassy should be closed down, and rallied to make their case in the most appropriate venue possible — outside a restaurant.

Things went from bad to worse when the protesters tried the old ‘bang on the window and chant’ approach and the AFP freaked the hell out and decided to exit, stage left.

It was at this point that Ms Prime Minister proved herself the bigger person when she reminded her AFP protectors that perhaps Tony might need some protection as well, seeing he started the whole thing in the first place.

As Gillard’s shoe-losing exit made headlines around the world, Abbott backpedalled as fast as his legs would carry him, denying that he said anything offensive, and even if he did he didn’t mean it. It was a predictable display in this era of pollies who try to avoid making a statement on anything of substance, but you have to wonder why he bothered.

It’s not as if the inhabitants of the tent embassy were ever going to vote for big Tony and his Liberal musketeers. And even if they did, we’re not exactly talking about a huge number of people. Sure there was a good turnout there on Thursday, but if you walk past the tent embassy on most days you’ll find four tents, around a half-a-dozen people and maybe a mangy dog or two. Oh, and there’s also a caravan.

They’re Greens voters, Tony. Make a statement and stand by it. People might respect you more.

Not me specifically, but some people.