"Marriage is not for everyone," says contributing editor-at-large Tess Lawrence. "But to exclude people from participating in this legal custom, on the sole basis of their adult sexual preferences, is facile and an inept legal argument."

Why are we threatened by same sex marriage?

Don't tell me that Pierre Slipper isn't unleashing his inner Priscilla when he lovingly adorns himself in formal regalia and slides into the Speaker's High Chair, looking at Tony Abbott in that louche way.

How come we are more content to remain silent and complicit as we observe the daily ritual killings in the likes of Syria, Afghanistan, and Iraq and yet squeal and reel in horreur at the thought of our brothers and sisters marrying whom they wish?

You have to wonder about the collective intellectual muscle of our politicians. Why the squeezing of the philosophical sphincter? Why do you have to have a conscience vote on this? Shouldn't EVERY vote in Parliament be a conscience vote? There's a fraction too much faction.

Those of us brought up Catholics probably find same sex marriages easier to accept. After all, Nuns are Brides of Christ. Crikey, I used to think, Jesus must be a polygamist or a Mormon or a Muslim.  So many Brides for one groom. But hey, Jesus is the Son of God, so I guess stamina goes with the territory.

It always seemed a long and lonely engagement for a novitiate, but then, no need for earthly speed dating when eternity is on the bridal registry. Plenary indulgences — gold credit cards of another kind. Buy into it now, no interest to pay forever or Hell to pay.

And what about those vows. Poverty, Chastity, Obedience. Abstinence makes the heart grow fonder. And you don't have to have child bearing lips. From here to paternity.

The fact that this invisible husband was never home, was a bit of a hermit and lived alone in the dark in a tabernacle, might be a plus for some, I suppose.

Really. At least once a day they would swallow Jesus, mind you, being careful not to let Jesus touch the molars. That would be disrespectful. No flossing Jesus out of cavities, thank you very muchly.

It's the miracle of the Sacrament. During the Mass, the Host (the wafer) is turned into the actual body and blood of Christ. All those bodily fluids. It's not a metaphor. Not if you're a believer.

So what do you do if you're a vegan and not a carnivore? Father FitzPatrick was singularly unimpressed when I asked him this in Confession. Gave me a yard of Hail Marys to say.

These were all issues that tormented me in my early days, as I contemplated the Nunnery and unsuccessfully tried to levitate, a religious form of planking. But I was put off the cloisters when Sister 'Bernadette' gave me a clip around the ear just because I asked her if Jesus weed and went to the toilet, code for Number Two.

I was confused at how Jesus had all these brides for him, and yet priests couldn't have any brides themselves, at least, not on the (holy) books.

And that some Popes had hundreds of little tackers running rampant around the Vatican.

Imagine what a surprise I had when I found out that priests used to be allowed to marry! Rome slapped a ban on marriage just to protect property and possessions going to heirs.

It's like the notion of the Virgin Birth; probably the most famous IVF birth in history. Albeit artificial insemination from a God.

Ah, how like other great myths and legends is this story. How like stories from the pantheons of Greek and Roman, Indian, Asian, Middle Eastern and Aboriginal, Celtic, Saxon and Nordic songlines.

Whether or not you believe or even care if Mary's was an Immaculate Conception, it still reeks to me of misogyny, and I don't like to think of any god in that way — especially if she's a She.

People go on about how marriage has been an institution for thousands of years. Not so.

The institutionalising of marriage and, in western culture, excising it from religion to the State, is fairly recent, is it not?

I reckon some of my gay friends are closet heterosexuals. I've urged them to go into the closet and to be unashamed of their sexuality. Be loud and proud. Like Bob Katter. Or Bill Heffernan and Craig Thomson. Or Wayne Swan, the mouse that bored. Or Amanda Vanstone. I've got a girlie crush on her, for sure. She's the Sophie Tucker of Australian politics.

Let's get down to the nitty titty on same sex marriages.

Be honest. I reckon it's not the 'marriage' part that puts the wind up unconscientious objectors — but the 'sex' part.

It really makes me larf when you hear people go on about 'abhorrent' sexual practices of homosexual men.

As if shoving things up one another's orifices is not practised by heteros. Ditto sucking, licking and all the other 'ings'.

Now I just don't want to even think of Bob Katter doing IT. But I think it's highly unlikely that an adult male gets to his stage in life without having experienced all of this. Especially someone like him, who is always sticking his big nose into someone's else's sexual business. 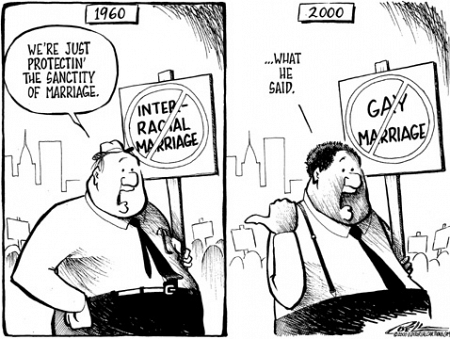 Surely, when we strip away all the blarney, this is about the equal right to love and marriage. Even if it no longer goes together like a whore's and carriage. We should acknowledge the reality that not everyone marries for love alone.

Gay marriage is about access to justice and the right to equal protection under the State's civil laws.

Marriage is not for everyone. Millions of Australians can attest to this. To each their own. But to exclude people from participating in this legal custom, on the sole basis of their adult sexual preferences, is facile and an inept legal argument.

Love has many dialects. No one dialect is greater than another. Love is like an emotional ringbarking of our hearts. Of our lives. It is a privilege to love. An even greater privilege, surely, to be loved.

It is a nonsense to suppose that the ideal marriage is restricted to a union of a man and a woman and our media headlines and Family Courts attest to this, as our coverage of the tragic story of little Darcey Freeman shows.

Regardless of the gender combination, a marriage certificate is no guarantee for anything and is certainly no proof of love or parental suitability. But it signals an intent and the State acknowledges that. Therefore, all its citizens should stand equally before the State, in the first instance.

Why should people of same sex unions be designated to a lower legal and societal caste of Australian?

The hypocrisy of religious and political figures on this subject is breathtaking, given that neither have their Houses in order.

To hear pontifications upon selective religious tracts and laws is an insult to our tolerance level and intelligence.

Love, and its siblings – such as compassion, equal rights and a shared humanity – will be enslaved to the politics of Hate, that traffics in fear and the demonising of 'the other'.

Let us err on the side of Love and the human family in all its imperfection and diversity.

And let us not succumb to those who love to hate and hate to love.