Thrills and spills but the election race isn't over

Yesterday's spills was forced on caucus by nervous nellies and the Murdoch press, says Rodney E. Lever, but it isn't all over for Julia Gillard yet. 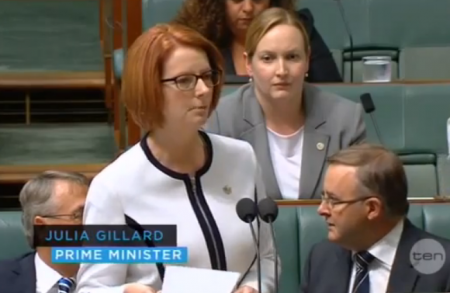 FOR JULIA GILLARD, this was do or die week.  Some in her Caucus don’t deserve her. Their loyalty is up for grabs.  The nervous nellies believed Kevin Rudd was their only hope. They are the ones who expect to lose their seats in September. That is their main concern. It's hard work winning a seat, painful to lose.

As for Joel Fitzgibbon and Simon Crean, they share an honest belief that Labor can’t win in September. They are both from Labor families and their hearts were breaking as they faced the onslaught from the papers.

Simon’s father, the venerable Frank Crean, was a wise and wily politician from the days of Arthur Calwell and Gough Whitlam, who lost more elections that he ever won. Joel’s father Eric Fitzgibbon fared better in terms of election wins, holding the seat of Hunter from 1984 to 1996, until he was succeeded by his son.

As they grew up, newspapers were like the family Bible. Even in the days of Frank Packer, old Warwick Fairfax and Keith Arthur Murdoch, newspapers were, generally, honest and reliable and the top political journalists were mates with the politicians — not like today’s rabble, shouting questions and poking microphones in their faces.

Politicians in the past trusted journalists and happily joined them in a beer and a chat about anything and everything. What was on the record and what was not on the record, was the respected arrangement.

If I could be forgiven a personal memoir, I remember one party night when I finished on the floor beside Malcolm Fraser, then Minister for the Army, in a challenge as to who could do the most push-ups off the floor. Indeed, I was the first journalist to interview and write about him when he announced he would be standing for the electorate of Wannan.

Prime Minister Julia Gillard is not going to be a sacrifical lamb for anyone. She is a fighter. Her latest fight was unnecessary, forced on a nervous caucus by the Murdoch press. Kevin Rudd said he would not challenge Julia again and he did not. He stuck to his word. The commentators jeered. I believe Kevin does have a higher degree of personal honour than most other politicians and certainly most Murdoch journalists.

Kevin reads disaster ahead if Tony Abbott becomes prime minister. You only have to look at furore in the LNP states now to see that the entire nation will be going backwards if Labor loses federally and Rupert Murdoch milks the country dry in his crazy ambition to own everything. That will be when Kevin next considers his future.

Labor knows how to regroup and they will win again one day. No Australian political party can compete with Labor’s history of ups and downs. Labor is Australia's longest surviving political party, always ready to fight hard, win or lose.

There is still a long way to go before this 2013 election reaches its climax. Remember last year’s US election? Obama came back in triumph, despite the Tea Party and the Republican press, which included Rupert Murdoch’s right wing Wall Street Journal and New York Post.

If Julia loses our next election, that may be the time for her to consider her political career, but certainly not before.

In the meantime, polls will come and go between now and September. There will be more slips and slides. Tony Abbott’s past shows that he has fallen on his face several times before. It can happen again, even with Murdoch’s undoubtedly powerful backing.

In America, I have heard it said that it was the social networking on the internet that gave Barack Obama his victory in November.

Where are the polls that can show the growing influence on the internet of online news and views and activity? Has it been tested at all? I have seen enough of it this year to know that it will be an important factor in the results on September 14.