Thomson 9: You are now entering Jacksonville

By Peter Wicks | 7 June 2012, 10:06am | comments |
After two disastrous days in the Federal Court and the categorical retraction by the prostitute put forward by A Current Affair as having slept with Craig Thomson, Peter Wicks says Kathy Jackson's stories appear to be unravelling at rather a rapid rate.

“A woman of enormous courage, and worthy of our admiration”

It is not often Tony Abbott has words so strong for a woman, so you would assume he is talking about the Queen — or perhaps Mother Theresa. You would be wrong. These are the words he had to say in Parliament House about Kathy Jackson, the so called HSU “whistleblower”.

[Read the other stories in this series:

On Monday, there was at least one person who disagreed with Tony Abbott’s assessment of Jackson's character, and came out and said so publicly.

“I am told by my associate there were direct communications between your client (Ms Jackson) and, at least, my associate,”

“That raises serious questions as to a party attempting to communicate with the court without the concurrence and without the knowledge of the other parties.”

It seems, in that special place in Jackson’s mind, a place I refer to as “Jacksonville”, approaching the judge privately to influence an outcome is normal. Back in the real world, we call it “contempt of court”, or “attempting to pervert the course of justice”.

With that sort of outrageous behaviour, you have to wonder whose advice she is listening to — her partner, Michael Lawler; her barrister, Brett Shields; or does she hear voices in her head?

If it is her partner she is listening to – the Vice President of Fair Work Australia, the second highest industrial judge in Australia, Michael Lawler – then that raises some questions.

Why would Lawler, a judge himself, not try to persuade Jackson against approaching a judge privately, given this course of conduct is strictly illegal?

And given Lawler is a judge, does this in any way indicate how things may work concerning matters that came before him as a judge?

Given this action, and his involvement, how much background investigation was done into Lawler himself before he was appointed as Australia’s second highest industrial judge by Tony Abbott, under John Howard’s leadership?

On the other hand, perhaps Lawler provided Jackson with no advice and it was purely the advice of her barrister, Brett Shields. If so, then no wonder it is coming for free. No doubt the “free” part came with some nudging and winking from some Liberal Party pals. If this kind of advice is coming from Shields, it will be interesting to see the goings on with his other well-known client — James Ashby, former staffer of Peter Slipper and drinking buddy of Christopher Pyne.

Given the level of respect for the law that we are now seeing from Jackson, and given that the findings of the FWA report were primarily on evidence produced by Jackson, logic would seem to indicate that there must be a very dark cloud over the FWA investigation’s integrity. Michael Lawler’s position in FWA also throws a huge dark cloud over the Fair Work Australia involvement, and its so-called investigation, which many have referred to as nothing short of a witch hunt.

It is important also to note that the public’s perception of Craig Thomson has been largely moulded by interviews given, and press articles influenced, by Jackson. Following that came the predictable rantings and finger pointing of the Opposition and the shock-jocks. Given that Jackson is now facing contempt of court charges over her attempts to influence Justice Geoffrey Flick in ex parte communications before a trial, then maybe it’s time we reviewed the eight investigations that cleared Thomson, rather than the questionable one that didn’t.

After all, only in “Jacksonville”, would a man like Thomson be held to account on the word of someone with so many questions raised about her integrity — questions that are still unanswered. Only in “Jacksonville” would someone be judged on evidence that appears flimsy at best and possibly fraudulent at worst.

Those of us who live in the real world would more than likely give Thomson the benefit of the doubt, given his is the only story that has remained consistent throughout this saga. 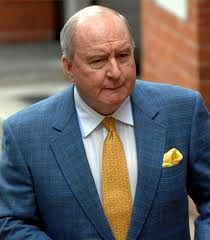 
I wonder if Alan Jones is planning a fundraiser to help Jackson raise funds to fight her contempt of court charges. Given the deafening silence coming from the Coalition on the matter lately, I think they may be looking to abandon ship — lest they get dragged down with it.

With regards to the questions that I have raised regarding the documentation that Independent Australia has published, it seems that Justice Geoffrey Flick agrees with me, stating that he was

“...astounded that the union only recently mounted an internal inquiry into allegations of cronyism, nepotism, corruption and lavish spending going back to the 1990s.”

In an interesting move, Michael Lawler also fronted the court with a QC, who asked that any allegations against Mr Lawler that came out of this enquiry be suppressed. Justice Flick refused to make that order and rightly so. Lawler’s attempt to distance himself from this affair, in which he appears to have been deeply involved, is like diving into the ocean and expecting to not get wet.

After two disastrous days in court, Jackson needed more controversy like she needed a hole in the head. However, late in the afternoon yesterday more questions about unusual union spending under her administration emerged.

Vex News ran a story that questions the buying of a sports car with union funds under Jackson’s watch. According to Vex, the payment that Independent Australia detailed from the HSU to Wai Quen was for the car.

I can confirm that sources told Independent Australia and myself a similar story over the weekend, however I cannot confirm any details as I do not have enough evidence. I can, however, confirm that the Victorian Police are investigating the matter and that we can expect major developments in the coming weeks.

In other related news, some of you may have seen Today Tonight’s story on the prostitute that was going to confirm having sex with Craig Thomson at a brothel on A Current Affair. As it turns out, she didn’t have sex with Craig — she wasn’t even in the country at the time according to her passport. Yet, even after she told ACA in no uncertain terms that the allegations were not true — they still broadcast them to a national audience and, in fact, flew down to Canberra to confront Craig Thomson over them.

What a grubby chapter, that served merely to further tarnish Craig Thomson’s tattered reputation. It should be noted that the Opposition put forward a censure motion over this ACA story when it first emerged. Now, it seems Tony Abbott and Christopher Pyne have gone to ground as this entire affair begins to blow up in their faces.

Maybe it is just as well she didn’t have sex with Thomson, as the evidence would suggest it was a freebie.

Looking at the credit card receipt that was shown as evidence, we see that it is the Bank Copy of the receipt — that is, the copy that the bank should have received. This means that, unless Fairfax got the slip from the bank somehow, the bank never received the slip — and without that no payment would have been taken from an account. Only in “Jacksonville” are banks known for their telepathic powers of perception. 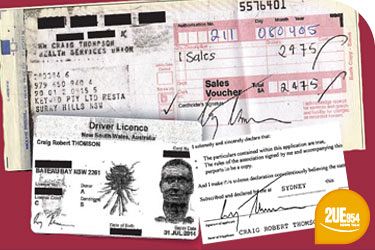 The evidence tendered by Fairfax for Craig Thomson's alleged dalliances with prostitutes.

Given that the bank seemingly could not have charged the account — how did the payment supposedly end up on the credit card statement that we are yet to see — and has somehow mysteriously gone missing from the HSU offices? Maybe Elvis took it? Anyway, apparently Jackson has seen it — and, gee whiz, isn’t she looking more and more reliable every day?

No wonder the other eight investigations disregarded this so-called “evidence”.

Certain members of the Liberal Party must be watching the Federal Court in disbelief. Amazed their legal buddies cannot save the train wreck occurring in Federal Court, as those whose words they relied on to defame Craig Thomson rapidly start to appear dodgier than a $2 kebab at 4am.

With Justice Geoffrey Flick apparently agreeing with my thoughts, I wonder if Jackson will accuse him of being a part of the supposed Williamson/Mylan conspiracy theory with me. There is probably only one person aside from Jackson who would know the answer to that...

And next time I’m in “Jacksonville”, I’ll be sure to ask Elvis personally.

(Read more from Peter Wicks on his blog WIXXYLEAKS. You can also follow him on Twitter @madwixxy.) 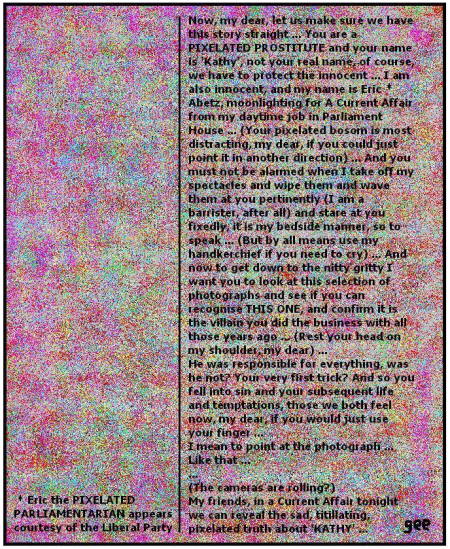