More documents from the HSU have surfaced, raising new and very serious questions about the financial probity of Kathy Jackson’s administration. Peter Wickscontinues his investigation.

Daily, it seems, we receive more information on Kathy Jackson's activities in her role as Secretary of the HSU. Much of this information leads us to ask serious questions.

Once again, I must stress that in no way am I saying that Jackson is guilty of anything. I am, however, looking forward to hearing her explanations for the transactions we have shown previously, and the ones we will expose in this article.

[If you have not read our previous articles, it is worth reading them here for background into this detailed investigation: Part One, Part Two, Part Three, Part Four, Part Five, Part Six & Part Seven.]

Before I do that, I need to answer a pertinent question myself; some have asked if the documentation that has come into my possession has been shown to the relevant authorities.

I can confirm that Victorian Police have copies of all documents shown in our articles, as well as all other documentation — and, further, I am also passing the documents on to Strikeforce Carnarvon in NSW. Both have active investigations in progress on these matters and more will come to light over the coming weeks.

In the meantime, Peter Mylan, the Acting General Secretary of HSU East, has been trying to clean up the accounts. Part of this job involves investigating the expenses that remain unexplained from when Kathy Jackson was controlling the expenditure.

Indeed, we have several documents, including receipts, and letters from Mylan seeking explanation for mysterious transactions. At the time of writing this, it is my understanding that none of these have yet been answered.

Let's start with the Jackson's Volvo. The receipts show that the balance outstanding on the vehicle was $41,285 after the trade-in — however the payment from the HSU was for $46,290. As you can see from the letter from Mylan, the HSU is querying the extra $5,005. We understand no answer has been received from Silverstone Volvo as yet.

More consultancy companies were paid with no clue as to what service they had provided. As you can see from the letters shown here in the links, Ms Sue Loukomitis was paid $2,750 and Numbat Consulting was paid a whopping $134,524.75. For what? Nobody can yet figure that out. 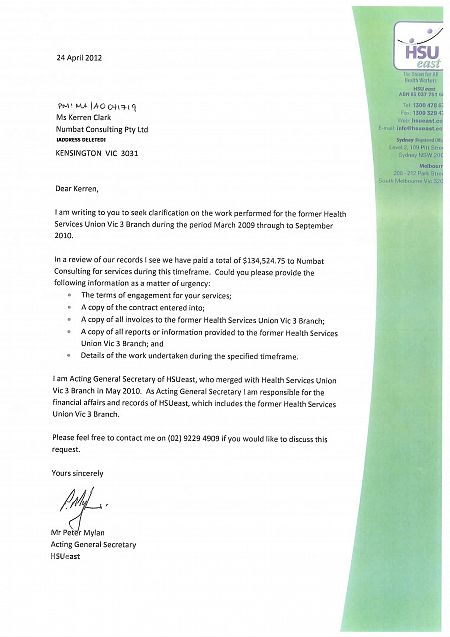 Jackson's close friend and co-worker Ruth Kershaw, who went on overseas trips with Jackson, was also the recipient of some consultancy fees. Kershaw's appropriately named company, Governing Ethics, was paid $28,700 — again, for services that are unclear, at best.

It's not just consultancy either — it also legal services. Wai Quen, who used to work with Jackson, was paid $22,000 for “legal services” — in Hong Kong, of all places. Why did she need legal services in Hong Kong? We don’t know and Jackson’s friend and co-worker is yet to respond to Mylan’s request for answers.

Being a friend of Jackson's, it seems, may be good for business. It would appear you don't even need to do anything to get big payments, except of course provide your bank account details.

Even ex-husbands get a look-in. Jeff Jackson, for instance, received $58,000 into his personal bank account as a "Loan to Vic No.1 Branch".

Not only did this money not get transferred to HSU No.1 branch directly, but Jeff Jackson had not worked at the branch for a year — so why would they send the money direct to him? It seems odd in the extreme.

To Jackson’s credit, though, it was not all strange fund transfers while she controlled the purse strings — she also did her bit to help out the younger generation by showing youngsters how to earn an honest day’s pay.

Looking at the attached pay slips for the following two kids, both apparently attending school at the time, it is clear she liked to help out the young.

These children earned $24.14 and $21 an hour. More than many of the low paid HSU Members earn even now, as adults. But then again, these kids worked for the branch in Victoria — but lived in Sydney, so I guess their travel expenses might have been pretty high.

So, why would Jackson employ these kids and pay them so much?

Could it be because their names are Matthew and Donald Lawler?

That’s right, these two are allegedly the sons of Jackson's partner Michael Lawler — who is, of course, the Vice President of Fair Work Australia.

So when Michael Lawler's organisation, Fair Work Australia, was investigating the HSU, many rightly thought it was a conflict of interest that his partner Jackson was the secretary of the union. Now it appears as if his two sons were also ex-employee's — or at least on the payroll.

It defies belief that nobody ever had a light-bulb moment and thought: “Ah … this may be a conflict of interest.”

Iain Ross stated in a senate committee that because Lawler is a sworn judicial officer and had taken an oath, he would not investigate complaints of bias or conflicts of interest.

Given many people take oaths and are still investigated, this would appear to be a preposterous excuse. Police officers take an oath, but yet we have an entire department set up to investigate them. Politicians take an oath, including Craig Thomson — and the FWA spent five long years investigating him.

I recall an investigation into a judge in Sydney over a speeding ticket. You may remember, Marcus Einfeld, a man who Iain Ross would probably class as beyond reproach, given his opinion on Lawler's accountability. After all, Einfeld took an oath and was a judge. However, he was caught speeding by a camera, and then tried to say it wasn’t him — that it was, apparently, a woman driving, Unfortunately for Marcus, the woman he named was dead at the time of the offence…

I think this matter warrants more attention than a speeding ticket.

Iain Ross, the President of Fair Work Australia, interviewed by Leigh Sales on 7.30, refused to stand by the Investigation into the HSU, repeatedly.

Currently, Jackson is in Federal Court, fighting against the wishes of  the membership, the National Branch, HSU East, and the Government, to demerge the branches and to appoint an administrator to clean this whole sordid mess up once and for all. Once an administrator is in place, forensic audits are likely to be done on the Union’s finances, including the approximately 400 boxes of sealed evidence from a previous Victorian Police Investigation, which have now been reopened.

Once again, one wonders what Jackson has to hide.

Still, it’s not all bad for Kathy Jackson — shock jock Alan Jones, a man Tony Abbott proudly calls a “mate”, is rumoured to be holding a fundraiser to help Jackson raise $40,000 for her legal bill.

(Read more from Peter Wicks on his blog WIXXYLEAKS. You can also follow him on Twitter @madwixxy.)