David Marr's masterful discussion of the politics of race in Australia in his recent Quarterly Essay, 'The White Queen: One Nation and the Politics of Race' leaves important questions unanswered, writes Dr Barry Hindess.

ONE OF THE enduring mysteries of Australian society concerns its attitudes towards race and racism.

Surveys show that an overwhelming majority of Australians are opposed to racism.

Yet, many Indigenous Australians and non-European migrants report experiencing racial abuse or discrimination while a noisy minority on the conservative side of politics, who take offence at being called racist, are determined to weaken Section 18C of the Racial Discrimination Act.

This mismatch between Australians' disapproval of racism and the undeniable presence of racism in important areas of Australian society drives David Marr's argument in 'The White Queen: One Nation and the politics of race'. If most of us have no truck with racism, how has One Nation come to occupy such an important place in Australian politics?

More precisely, why are the major parties falling over themselves to attract its actual or potential supporters, or at least not offend them? Marr interprets his title's phrase 'the politics of race' as encompassing the ways in which race and racism intrude into mainstream politics, particularly the electoral competition between Labor and the Coalition. 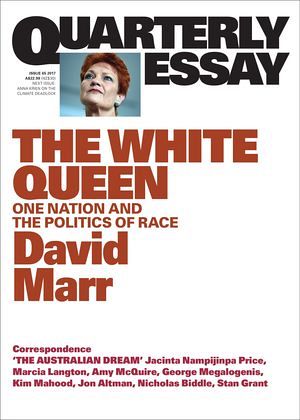 'The White Queen: One Nation and the Politics of Race', Quarterly Essay 65, David Marr.

The first major villain in Marr's story is the White Queen of his essay's title.

“ ... a person who believes their race to be superior to another.”

In this sense, she says, she's no racist — although critics agree that much of her conduct rests on an implicit racism. Marr treats Hanson's anti-Muslim tirades as racist. So, too, is Australia's bipartisan consensus (not discussed in The White Queen) on combatting radicalisation, which simply ramps up familiar anti-Muslim prejudice by treating radicalisation as something that happens exclusively to Muslims — not to Tory PMs, paedophile priests or white supremacists.

Marr's more substantial villain, call him the "Black Prince", is John Howard — who stands accused, first, of failing to call out Hanson's racism when she appeared on the national stage in the 1990s.

Marr quotes Howard's own reflections on this refusal in his 2010 memoir Lazarus Rising:

'Could the impact of Hanson have been less if I had attacked her ... immediately after her maiden speech .... [It] would have ... gratuitously alienated [her supporters] — and for what purpose, other than the political benefit of the Labor Party.'

Worse, Howard defended Hanson's supporters against the charge of racism, describing them as

' ... a group of Australians who did not have a racist bone in their bodies, who believed that in different ways they had been passed over.'

Howard, in effect, aimed to appease Hanson's supporters in the hope of winning their votes or, at least, their preferences.

'Something grubby, entered national life at this point.' (p39)

Further, Howard 'shattered the 20-year truce [between the Coalition and Labor] on multiracial immigration', (p25).

In practice, Labor also chose to appease or, at least, not offend Hanson's supporters. Marr maintains that this bipartisan appeasement of a racist minority "tainted Australian politics”, (p2).

“Tainted”, “grubby” — these are terms of moral condemnation, not dispassionate political analysis. It's easy to see what Marr is passionate about here and many, perhaps most, of his readers would agree with him. Even so, it is worth pausing to consider what this condemnation adds to our understanding of the Australian politics of race.

Let me begin with "the 20-year truce" Marr describes Howard as repudiating. Experienced diplomats know that, even when there is an agreed and signed text, the parties to an agreement take away their own interpretations. In the case of informal agreements, the parties are even less likely to share the same view. Marr presents his "truce" as an agreement between Labor and the Coalition not to pursue racist votes, thereby pointing to Howard as the villain.

Yet, a slightly different interpretation of this unwritten "truce" as a vague agreement to keep race out of politics yields another view. In this view, the "truce"' was decisively broken in 1995 by Labor's Racial Hatred Act, amending an earlier Labor Government's Racial Discrimination Act by adding the controversial Section 18C and, a few years earlier, by Keating's 'Redfern Speech'. Labor, on this view, repudiated the truce by not leaving racist dogs in peace.

This minor variation on Marr's story hardly lets Howard off the hook, but it does knock him off the Black Prince's perch, leaving him simply as one of the more successful "dark knights" of Australian politics. As for Marr's "tainted" and "something grubby", the contamination he laments came in once the racist dogs had been aroused. Yet we should recognise that Australian politics was grubby enough before Howard arrived to lead the "dark side". Nor does the ALP come out of this revised story very well. While it remained largely on the decent non-racist side, it lacked the courage to do much about it.

One final observation: if "tainted" and "something grubby" are terms of moral condemnation passing as political analysis, the same is true of "dogwhistle". Such terms suggest that the writer is morally superior to the people under discussion — in the dogwhistle case, Hanson's and Howard's white racist voters. Marr notes that Australian rightwing talk of Left elitism towards the bulk of the population has been imported directly from the discourse of the American Right. I agree, but we might also suspect that the political use of the pejorative "dogwhistle" may also have been imported.

'... the great dog-whistler, the politician who could send a signal to the bush that went almost unheard in town.'

This draws on the image of the dogwhistle once commonly used in sheep herding. It was designed to sound at a frequency, 20,000Hz or more, which would be inaudible to human ears but would be noticed by dogs, whose hearing is generally more sensitive to high-frequency sounds than that of humans. Where humans would be unaffected by the whistle, except for a few headaches, suitably trained or habituated dogs would receive both a sound and the instruction that came with it – telling them, for example, to stop where they were or to round up sheep that had broken away from the main flock – and could be trusted to respond accordingly. Skilled dog-whistlers like Howard knew what they were doing while the dogs – Hanson and Howard's working class supporters – could be expected to react without thinking.

In fact, the difference between bush and town hardly fits the Australian Left's usage of the term, which is more concerned with distinguishing between the political conduct of Hanson's and Howard's, racist supporters – who, Marr tells us, were as likely to be found in the cities as in the bush – and one's own, more sophisticated conduct.

While it appears to be an analytic concept, "dogwhistle" functions as little more than a means of asserting the speaker's ethical superiority over the "dogs" who hear the whistle and act accordingly. To his credit, Marr makes little use of this elitist concept in the body of his discussion.

Barry Hindess is an emeritus professor at Australian National University’s School of Politics and International Relations. You can follow him on Twitter @barryhindess.

One Nation has the only policy that protects you from the growing threat of Islamic terror. #Pray4MuslimBan

Pauline Hanson not being "racist", but calling for a ban on Muslims. (Source: @PaulineHansonOz.)

The Coalition, Hanson's resurrection and the rise of racism https://t.co/y2Ch6OTBDQ @IndependentAus

The I in ICAC: Independent or inaccurate

Corruption is the price we pay for democracy

1 March 2018, 3:30pm Political corruption is rife within modern day democracy, but the destructive ...

Corruption in politics: The picture isn't so clear