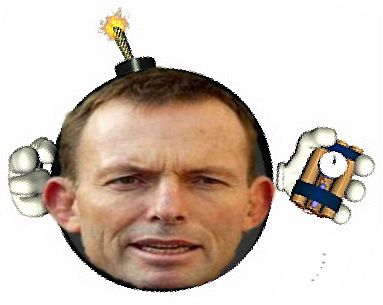 Tony Abbott’s performance in front of the Queen confirms that he is a ticking political timebomb with a very short fuse, says senior correspondent Barry Everingham.

At last week’s Government reception for Queen Elizabeth at Parliament House, 700 citizens had the honour of being there to hear the Queen herself reply to speeches of welcome by Prime Minister Gillard and Opposition Leader Abbott.

Abbott, as usual, was the fly in the ointment and managed to mar the occasion by putting on his Captain Catholic hat and, I guess, insulting the Queen — who as well as being the head of state of 16 countries is officially the Defender of the Anglican faith.

Abbott’s first huge blunder was to directly remind the Queen her monarchy was not as old as Rome’s papacy — as if she didn’t already know.

As though that wasn’t bad enough he dragged out what was a humorous but inappropriate anecdote about the long departed and much unlamented English-hating Irishman Daniel Mannix, a long time Roman Catholic Archbishop of Melbourne.

Surely Abbott has someone in his office who could have pointed out to him that both references were, well, just appallingly bad taste.

And when he had his private meeting with the Queen at Government House he barged right in, surprising the 85 year old monarch with a diatribe on the combative nature of Australian politics without waiting for the media cameras to leave.

And his silence on the revelations that two of his backbenchers are promoting the tactics used by the Tea Party – whether or not that includes the shooting of opponents, as recently happened in the United States is not clear – shows an amazing lack of judgement.

But Senator Cory Bernardi – a disciple of Professor Flint’s, who once described him as being “ruggedly handsome” – and Andrew Laming are urging Liberals to disrupt the arrival next month of the President of the United States, Barack Obama.

Throw stuff at him, they urge...let him know he’s not welcome.

Now this is totally outrageous, particularly as those two oafs would be in line for a ministry in the event of an Abbott government.

And the same applies to the foul-mouthed Member for Indi, Sophie Mirabella.

Now, Abbott hasn’t commented on her long time and hitherto secret love affair with a distinguished lawyer, whose children are heading for the Supreme Court regarding her lover’s generosity to Mirabella and her now husband.

It’s to be hoped that, in the event of an Abbott Government, Mirabella doesn’t get a ministry.

Every time Abbott opens his mouth it becomes that much more obvious we are witnessing the decay of a man whose use by date has passed; he’s a political time-bomb with a very short fuse.

His negativity has reached danger levels — the ranting about the dismantling of a carbon tax, his “illegal” boat people obsession, which is already causing an influx of boats, and his out of control behaviour in Parliament are disturbing and dangerous signs.

It’s past time for him to be defused.